Luke Skywalker thinks the Skellig Michael island off Kerry where the latest Star Wars was filmed is otherworldly. 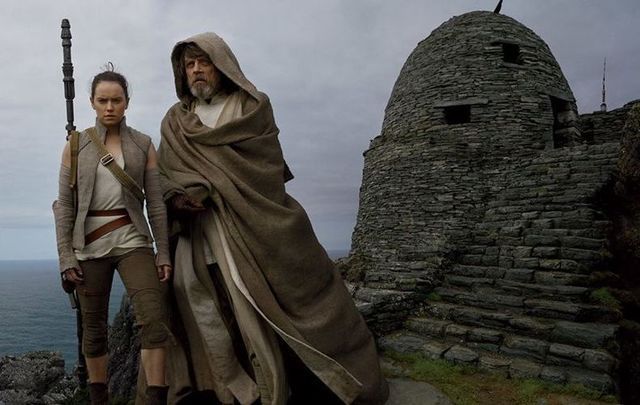 Mark Hamill, who plays Luke Skywalker in the movie franchise Star Wars said the island of Skellig Michael, off County Kerry, where they filmed on location gave him “chills”. He was deeply impacted during filming on the remote island once populated by monks.

“I remember, I had this feeling that rushed over me when I was at the top of [island] Skellig Michael, because the first thing we did on the original Star Wars, before Carrie [Fisher] came over or Harrison [Ford] came over. I went with Sir Alec [Guinness] and Anthony [Daniels] and Kenny Baker – the two droids – and we went and we did the desert scenes in Tunisia.”

Skellig Michael, a mass of craggy rocks off the south west coast of Ireland, was home to a Gaelic Christian monastery at some point between the 6th and 8th century but the island was abandoned in the 12th century. The remains of the island became a UNESCO World Heritage Site in 1996.

Hamill worked on the island while filming Star Wars: The Force Awakens and Star Wars: The Last Jedi. He told Joe.ie “It was just – y’know – I got the chills. And I never had that feeling again, until – not in 'Empire,' when we went to Norway, it was brutally cold, but snow is snow, I’ve seen it before.

"In 'Jedi,' we went to the Redwood forest [of northern California], and again, gorgeous, but again, it was something that I was familiar with.

"Y'know, also, it was built in the 1100s, and you go 'How did they get these stones out the island in the first place?', y'know? These monks must have built canoes or who knows, but it is a really extraordinary place."

The 66-year-old loved his time playing bartender in a local pub too. While on locations he took to Kerry life like a duck to water and took in the atmosphere, perhaps a little too much at the The Bridge, in Portmagee.

"We went to the local pub and the kids, there were four or five kids that performed these songs, I mean it was just unbelievably cute, and I signed for them. I went around and met everybody and signed for everybody and took the selfies and all that, and pretty soon I noticed that the guys behind the bar were saying 'What about us?'"

"So I got behind the bar, and I did the selfies and all the pictures, and I said 'Why don't you teach me how to pull a pint of Guinness?' cos Lee Marvin had taken me to a pub back when we were doing 'The Big Red One' [1980 movie set in World War I], where when they finish the Guinness they do this, and they put a shamrock on top!"

Luke Skywalker is pulling pints in Portmagee.... yes this is happening pic.twitter.com/Irpm5tiA7G

"Anyway, it is a process, you have to (pull it to) half-way and set it aside and all that. Again though, that picture got all over the internet and people think that I'm, y'know, possibly thinking of bartender as a back-up career.

"Which is probably not a bad idea."

The Last Jedi is set to open on December 15.