A pair of tourists to Ireland wound up in a terrifying lurch today when their car went halfway over a lookout point at the Lakes of Killarney. 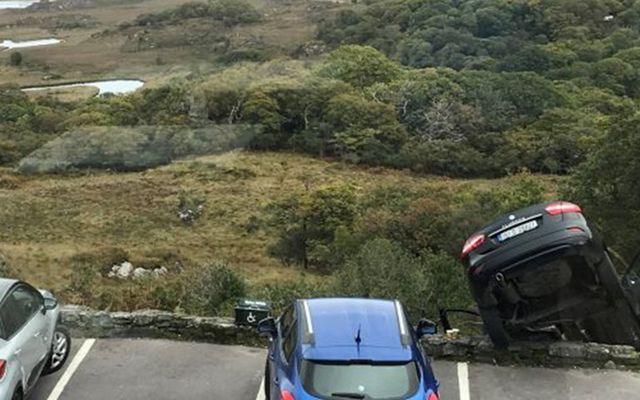 A hair-raising scene unfolded today at the Lakes of Killarney when a pair of tourists accidentally drove their car over a stone barrier and found themselves dangling above a steep decline.

Raymond O'Shea, who owns the famous Ladies View cafe and shop, was clearing tables on his restaurant's terrace when he saw the whole incident unfold.

As O'Shea relayed to the Irish Times, the young couple from Taiwan drove their rented vehicle into the car park. As they went to park the car, it wound up sailing halfway over the stone wall barrier and dangled there holding on by one wheel.

“It had gone over the stone wall barrier. I was holding my breath,” O’Shea told the Irish Times.

He ran over to the car to help, but miraculously the pair were able to open the car doors and climb out themselves.

“After their initial fright they were laughing about it. They were really cool,” he said.

After speaking with them more, he learned that it was their first time in Ireland, and that they had been to Kinsale and Kenmare and were on their way to Dingle when the scary accident took place.

Undeterred, they will be staying overnight in Killarney until the rental company can assess the situation and get them on the road again.

Driving in Ireland is often a learning curve for tourists, especially from countries that drive on the right side of the road, including Taiwan and the United States.

Read More: Diary of a new left-hand side driver in Ireland

O'Shea said that in all of the years his family has owned the cafe, he's never seen an incident like it and he expressed relief no one was harmed.

The Irish Times described what took place as a "freak accident," but let us not forget that according to one local politician the fairies are to blame for the poor state of roads around Killarney.