Let’s get back to Ireland! Country prepares to welcome international visitors

"When the time comes, a hundred thousand welcomes await," Tourism Ireland says in its endearing Let's Get Back to Ireland campaign. 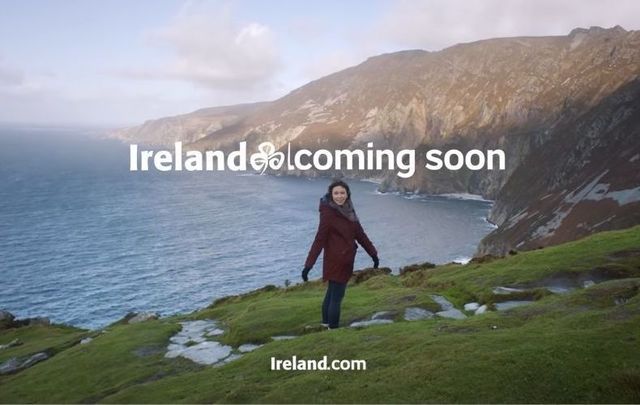 Tourism Ireland launched a new $4.2 million promotional campaign this week to build anticipation for holidays in Ireland this summer.

A press release from the Irish government agency said, “The recent announcement about the re-opening of international travel to Ireland on July 19 is excellent news for everyone working in the Irish tourism and hospitality sector.

"Tourism Ireland has been actively planning for this restart and is now ready to roll out a significant promotional kick-start campaign to entice and welcome back overseas visitors.

“Phase one involves a major digital video campaign. Called ‘Let’s get back to Ireland,’ the online video will build anticipation for holidays in Ireland this summer. It will be promoted via online video platforms (including YouTube), on social media, mobile devices, as well as on Connected TV (television that can stream digital content), in nine different markets: Great Britain, the United States, Germany, France, Spain, Italy, the Netherlands, the Nordic countries and Switzerland.”

Niall Gibbons, chief executive of Tourism Ireland said, “We are delighted to unveil our new campaign which will help build anticipation for trips to Ireland this summer, among holidaymakers in our key overseas markets.

"We know from our research that there is significant pent-up demand among overseas visitors to return to Ireland as soon as possible.

“However, we also know that there will be significant competition, as every destination across the globe has experienced the impact of Covid and will be seeking their share of the recovery.

"As international travel begins to restart, the priority for Tourism Ireland will be to keep the island of Ireland front and center in consumers’ minds. Our kick-start campaign will need to punch through the noise and create an immediate desire to visit.”

Before COVID-19, overseas tourism to Ireland had recorded nine consecutive years of record growth, with 2019 surpassing all previous records when 11.3 million overseas travelers visited the island of Ireland.

Two million of those were North American visitors delivering revenue of around $2.3 billion for the economy in 2019.

Phase two of Tourism Ireland’s kick-start activity will go live in July, the press release added.  This will be a separate campaign that will deliver a very clear “book now” message to prospective international visitors and will single-mindedly drive visitor numbers back to Ireland.