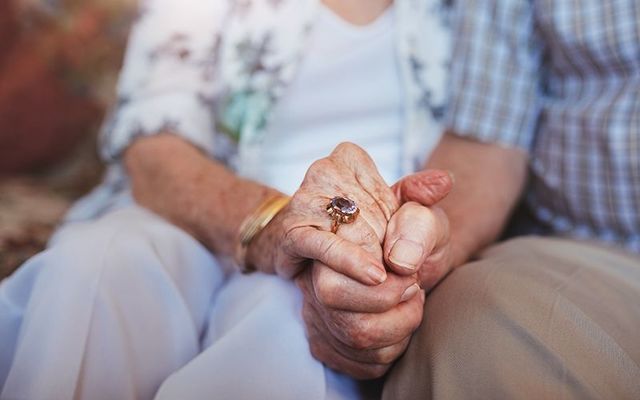 An Irish man who took his mother on an 18-month world tour as she slowly deteriorated following her Alzheimer's diagnosis said that the trip helped improve her condition.

Sean O'Sallaigh, 44, took his 83-year-old mother Mary O'Niel on an 18-month tour of the world before her death in 2019 and said that she began to walk and talk again as they took in the sights in South Africa, Nepal, and Italy.

O'Sallaigh was living in Rome in 2013 when his mother was diagnosed with the condition at the age of 77 and traveled back and forth to Dublin to help care for her.

In February 2018, he decided to take her to Nepal for what was initially supposed to be a short trip.

"It was cold and dark and I wanted to take her somewhere nicer for winter," he told the Daily Mail.

However, he revealed that his mother began to show signs of improvement as she took in a "festival of color" in Nepal.

"I thought Alzheimer's was just a decline, but when we got to Nepal, she started to regain capabilities. She walked more, and she talked more, she even learned new words."

Mary had such a good time celebrating the "Happy Holi" festival in Nepal that he decided to prolong his travel plans with his mother.

"I planned to come back after a couple of months. It was warm and she was able to go out so much.

"We would walk by this lake and watch the children playing. They would come and sit with us at cafes and talk to her all the time and she to them."

O'Sallaigh said that his mother particularly loved when Nepalese locals threw colored powder over during the Happy Holi festival.

The pair traveled onto Rome in April 2018 before heading to the Italian mountain region of Umbria the following July.

O'Sallaigh, who has run travel company Angel Tours since 2004, said that his mother suffered a fall in Rome in May 2018 and that he had to enlist the help of a friend to help care for her.

He then took Mary to Cape Town in South Africa in September despite her worsening condition and said that she enjoyed dipping her toes in the sand on South Africa's golden beaches.

Her condition continued to deteriorate throughout their stay in South Africa and she died on May 24, 2019, after contracting a chest infection.

"By the end, she would sometimes call me Daddy, and I did feel like a parent," O'Sallaigh said. "When she passed away, I felt like I had lost my little girl."

He paid a touching tribute to his late mother in an interview with the Daily Mail earlier this week.

"She was the best thing in my life.

"Unconditional love is a thing you don’t get often, and she always gave it, even though she had a tough life."

O'Sallaigh said that his tourism business took a hit as a result of his 18-month world tour but that he loved spending so much time with his mother in her final years.

"People thought she would be a burden, but she just never was."