Dublin's Montpelier Hill is a place of immense history, beauty, mystery and darkness. Would you dare visit? 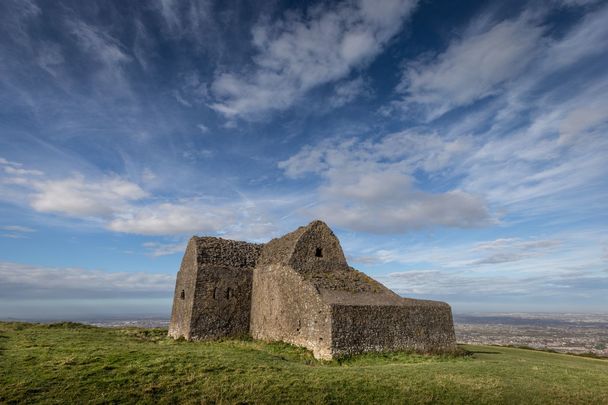 Dublin's Montpelier Hill is a place of immense history, beauty, mystery and darkness. Would you dare visit? Getty

High up in the Dublin Mountains the remains of one of the most notoriously dark sites in Ireland can be found. It's a place where myth, legend and history blur, and where truth might just be stranger than fiction.

Even the name of the society that once met at the stone hunting lodge on Montpelier Hill evokes images of dark rituals and even darker secrets: the Hellfire Club.

The hunting lodge is in ruins now, and it's no wonder, given the turbulent past of the site. According to lore, the place was cursed from the beginning. It was originally built in 1725 by William Connolly, the Speaker of the Irish Parliament, and it was said that in order to clear the land for the lodge, Connolly ordered the destruction of a cairn, an ancient burial monument.

It wasn't long before the lodge's roof was destroyed in a storm, and it was said that the damage had been done in retribution for the defilement of the ancient site. Connolly died only four years after building the lodge, and it wasn't until the 1730s that it fell into the hands of Richard Parsons, first Earl of Rosse and founder of Ireland's Hellfire Club.

At first, the Hellfire Club gravitated toward what we'd recognize as the antics of an upper-class youth with too much time on their hands. They were practical jokers (often targeting the clergy) and womanizers; they drank and they gambled.

Local accounts paint a grim picture of what was going on inside the club, but the exclusive nature of membership and the remote location of the lodge mean that there aren't many reliable accounts of just what went on there. One popular story is that while the club members regularly drank scaltheen (whiskey and hot butter) and toasted the Devil, they left a chair vacant for him if he ever decided to show up.

And, supposedly, he did. The story says that it was a stormy night when the stranger knocked on the door of the lodge. He was invited in by the members, joining in their drunken revelry and their card games. It was only when one of the members dropped a card on the floor and went to pick it up that he noticed their visitor's cloven hooves. Other stories involve local priests exorcising a demon from the club's black cat mascot and a tale of human sacrifice, and while that all undoubtedly sits firmly in the realm of folklore, there are still some very real and very horrible stories that are true.

Henry, the fourth Baron Barry of Santry, was one of the younger members of the club and, by all accounts, he was an angry drunk. One story says that he once burned a servant to death in his bed after drenching the sick man with brandy and setting him on fire. While he was supposedly successful in paying people to look the other way after that incident, he was eventually taken to trial and convicted over the stabbing death of another servant. Protected by powerful friends – who nevertheless seemed to want nothing more than to be rid of him – he spent the rest of his days alone in English exile.

The trial turned all eyes to the activities of the Hellfire Club, and it wasn't long after that several other members died in the 1745 Battle of Fontenoy. The original Dublin Hellfire Club was actually only around for a handful of years, but the legend has proved larger than life.

It's even debated as to whether or not they ever met at the Montpelier Hill hunting lodge, with some historians placing their favored meeting spot at a tavern on Cork Hill. It's the Montpelier lodge that remains firmly linked with the club's dark deeds, though, lonely, foreboding and isolated.

Today, the lodge is in ruins. A couple of different stories are told about just what happened to the building, with some claiming that the members set fire to the lodge when the Connolly family refused to renew their lease. Others say that a careless footman spilled a drink on one of the members, who retaliated by soaking him in brandy and setting him on fire; the fire spread, burning and killing as it went. And still others say that most of the damage was actually done when the lodge was stripped for building materials that were then used for the construction of another nearby lodge.

Another group, who went by the tongue-in-cheek name of The Holy Fathers, reportedly used the lodge for their meetings between about 1771 and the turn of the century. Stories about that group were just as dark, and they were supposedly responsible for the murder of a farmer's daughter, who they then ate.

Needless to say, there are countless stories about what went on at the Hellfire Club, and it's likely that we'll never actually know which are truth, which are fiction, and which are a little bit of both. The lodge on Montpelier Hill remains a foreboding place to visit, and those who are interested can head up there at any time between 7 a.m. and 9 p.m. (April through September) and 8 a.m. to 5 p.m. (October to March). The car park is off the R115 south of Rathfarnham about half an hour outside of Dublin, and taking one of several paths that lead from the car park will take to you the hilltop lodge that is at the heart of some of Ireland's darkest stories.