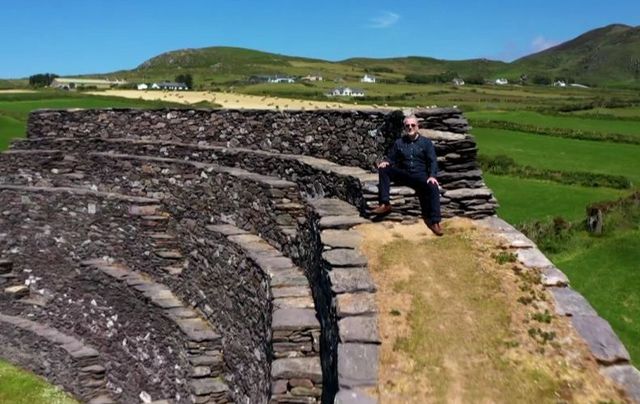 Michael Londra, an Emmy-nominated Irish singer, will resume his journey across Ireland as he returns for the third season of "Ireland with Michael," which began broadcasting on public television on January 6.

From the bright lights of Dublin to the rolling hills of Kerry, "Ireland with Michael" showcases every beautiful aspect of the Emerald Isle and is an excellent starting point for those who are unfamiliar with or planning a visit to the country.

Each of the eight, half-hour episodes of “Ireland with Michael“ highlights an intriguing Irish destination, steeped in culture and history. Viewers will meet local artisans, experience small-town pubs and traditional cuisine, and enjoy VIP access to unique musical and cultural experiences.

He will also unveil the stories behind some of Ireland's most famous sites, including the Rock of Cashel, the Irish National Famine Museum, the Derry Walls, and the Inishowen Peninsula.

He also introduces viewers to Ireland's Poet Laureate Sasha Terfous, celebrity chef Darina Allen, and the Riverdance troop as they embark on their 25th-anniversary tour.

Speaking ahead of the release of the third season of "Ireland with Michael," Londra said the series has given him an opportunity to share what he loves about his native land.

"Each time I return to Ireland I find another wonder. There always seems to be another beautiful place, there is always another wondrous talent to discover," Londra said in a statement.

"I feel like the show has given me the opportunity to share what I love about the island and the people who live there. This season is no exception. Ireland, its talent, and this show will be around for a long time."

The series first aired on public television in May 2021 and has since clocked 8,400 individual episode airings on PBS stations across the US, broadcasting into 83% of all US households.