On the Irish trad music trail in County Clare

"Clare is a wellspring of musical talent, so when I decided I wanted to learn to play, it seemed like the obvious place to go... one day, I decided, why not?!" 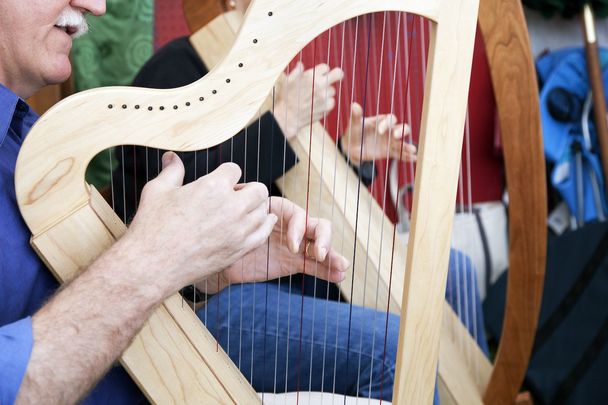 Clare is rich in traditional music, and you’ll never be short of a session if you know where to go, writes Deanna O’Connor.

Maura O’Connell, Martin Hayes, Willie Clancy, the Kilfenora Céilí Band—even if you’re not a fan of Irish traditional music, some of the names of famous sons and daughters of the Banner County will ring a bell. Clare is a wellspring of musical talent, so when I decided I wanted to learn to play, it seemed like the obvious place to go. For years, I had wished I could play the Irish harp, and one day, I decided, why not?!

Somewhat serendipitously, a quick search on the internet brought up a week-long intensive course, run by Janet Harbison, the grand dame of Irish harping, in the beautiful surrounds of the Boghill Centre in Co Clare. It was sink or swim time. Buying a harp is an investment of thousands of dollars, and I figured I would know by the end of the week if it was an investment worth making (I didn’t play any musical instruments at this point, so it really was a leap into the unknown).

Magic in the bog

The Boghill Centre, run by a Dutch woman, Sonja O’Brien, is an eco-friendly residential venue and organic farm set in 50 acres of natural bogland; it plays host to everything from yoga retreats to traditional Irish music weeks. Sonja has lived in the area for over 25 years, and as an accomplished fiddle player, is active in the local music scene. While I joined the dedicated harp group, she took a mixed class for the week—a group of Irish and American friends who regularly played music together, on a variety of instruments. They had traveled from their homes in the US to combine a holiday in this scenic area with a week of masterclasses learning more traditional Irish tunes.

Our base for the week was magical—close to nature and with delights to be found wandering through the estate, from a stone circle to a labyrinth, to hand-built cob houses. We were served delicious organic vegetarian food, sourced from the vegetable gardens and fruit orchards. The center takes in ‘woofers’ —volunteers who learn about natural methods of food growing sourced through the World Wide Opportunities on Organic Farms (WWOOF) organization.

During the week, based in Boghill, we attended our masterclasses in the mornings, and in the afternoons had time for one-on-one lessons, as well as walks and outings to explore the stunning landscape of the Burren, the remarkable limestone landscape that is home to a unique mix of geology and flora.

Every evening we took off to sample the musical delights of a different town, from the notorious ceilí band in nearby Kilfenora (still going stronger than ever after over 100 years), to sessions in pubs across Ennistymon, Doolin and more. The beauty of Clare is that, at less than 100km from end-to-end, its compact size allows you to see all corners from a central base. The most unassuming exterior of a small pub in a country town can be hiding a plethora of talent, spending hours of an evening playing traditional Irish tunes in a ‘session’. All comers are welcome to join, the only prerequisite is that you can play or will stand up and belt out a tune.

Much Irish music is passed on or learned by ear, so many musicians with a good grasp of their instrument will find they can sit in on a session and pick up the tune, as it is played in repetitive rounds, or at least join in with some accompanying chords.

Here’s a top tip: the tin whistle is both a lot easier to learn and a lot easier to transport to sessions than a harp! Most Irish children will learn the tin whistle in primary school, and for many citizens of Clare, Custy’s Traditional Irish Music Shop was where they were brought to choose their first instrument. The fiddle and the accordion are two of the most common instruments used to play Irish tunes, along with the flute and the Uileann pipes.

As the home of traditional music, the annual calendar of festivals, in a normal year, is extensive. The season starts in February and continues until the end of October. The Russell Memorial Weekend kicks off proceedings, in Doolin on the last weekend of February. The festival began in 1995 as a remembrance ceremony to Micho Russell, the world-famous traditional musician, who died in 1994. In 2006, at the request of the Russell family, the festival was renamed the Russell Memorial Weekend in memory of the three Russell brothers and two sisters; Micho, Gussie, Brigid, Packie, and Mary Kate.

One of the most well-known of all events in the Irish music year is the Willie Clancy Summer School, a week-long event, with classes in traditional music and set dancing, held in Miltown Malbay at the start of July. The first and biggest of such events, it was dreamed up by the town's best-known uilleann piper, Willie Clancy, and was implemented to commemorate him, after his death in 1973. Aside from organized classes and lectures, scores of impromptu sessions happen nightly, where the cream of Irish traditional musicians, who have come to teach, gather together and do what they do best—play music.

The start of September sees the Crotty Galvin Weekend in Moyasta, which commemorates three of the town's most famed musicians—Ellen (Nell) Galvin (1887-1961), PJ Crotty (1946-2005) and Peadar Crotty (1940-2009). The small townland, located between Kilkee and Kilrush, is also home to the Galvin family business Moyasta Oysters. Harvested from the Grade A certified waters of Poulnasherry Bay – named after the Irish word for ‘hole of the oyster’—they are of exceptional quality and a must-try for seafood lovers visiting the area. Once COVID-19 restrictions allow, the farm tour is a fascinating insight into this delicious and highly nutritious food.

Another stop-off for those who wish to combine the sensual delights of food and music on their trip to Co Clare is the Burren Smokehouse Visitor Centre. The award-winning smokehouse was set up in 1989 by Swedish woman Birgitta Hedin-Curtin and her Irish husband Peter Curtin, in Lisdoonvarna, Co. Clare. The daughter of a huntsman, Birgitta brought her knowledge of self-sufficiency and quality produce to her business and the company is renowned for using the finest Irish organic salmon, mackerel, trout and mackerel.

From the Burren Smokehouse, it’s just a short drive to the world-famous Cliffs of Moher, Clare’s best-known visitor attraction, stretching for 8km along the coast, reaching heights of 214m. No picture, nor any of their appearances in film (The Princess Bride, Harry Potter and the Half-Blood Prince, and Leap Year) can ever prepare you for the scale and grandeur of the view.

There’s so much more to say—the great restaurants and cafes, charming towns, lakes and rivers, not to forget 11 top-quality golf courses. For a small county, Clare packs a lot in, it’s hard to know where to start. My advice—just follow the music.