All the basics - and some fun facts - about County Clare. 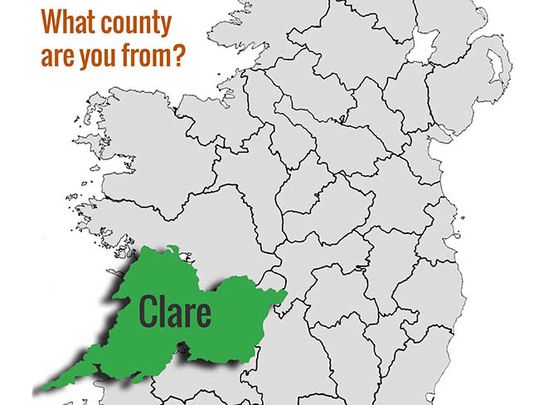 Check out the facts about the 'Banner County' Jay Sia

From a brief history to the most common surnames and the top attractions, here's a crash guide to County Clare.

A brief history of County Clare

County Clare's name comes from the Irish word Clár, meaning a board or plank. A board was placed across the river Fergus outside Ennis, at a place which was to become known as Clare.

The area of what is now County Clare was divided into cantreds or baronies, each occupied by their ruling families. The O'Loughlins, O'Garbhs, O'Briens, O'Connors, O'Deas, McMahons, and McNamaras were the main clans.

The O'Briens were a major force in Thomond from earliest times. The Vikings raided Clare on many occasions during the 9th and 10th centuries. They were finally defeated at the beginning of the 11th century by the most famous of the O'Briens, Brian Boru, who led the army which defeated the Danes of Dublin at the Battle of Clontarf in 1014.

Bunratty Castle & Folk Park: Bunratty Castle is the most complete and authentic medieval castle in Ireland. Built in 1425, and plundered on many occasions, it was authentically restored in 1954 to its former medieval splendor, with furnishings and tapestries capturing the mood and style of the times. Famous Medieval Banquets are held nightly. Within its grounds is Bunratty Folk Park, where Irish village life at the turn of the century is recreated.

Cliffs of Moher & O'Briens Tower: Just north of Lahinch, on the coast of West Clare, are the famous Cliffs of Moher, defiantly standing as giant natural ramparts against the aggressive might of the Atlantic Ocean. The Cliffs of Moher (Great Wall of Thomond) and O'Brien's Tower, which stands out on a headland, shows the extent of the O'Brien influence on the area.