Cork has long been called the real capital of Ireland, and it certainly has plenty to offer, as Aisling O’Toole discovered on a recent trip. 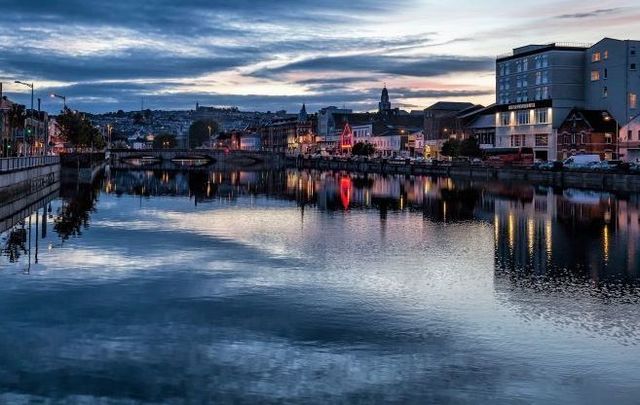 A view of Cork city, from the River Lee. Getty

Cork has long been called the real capital of Ireland, and it certainly has plenty to offer, as Aisling O’Toole discovered on a recent trip.

Where better to start a tour of Cork than in the city itself. As one of Ireland’s biggest counties, Cork has long been positioned itself as the people’s capital, and while the city is certainly pretty with more than enough to entertain, it’s outside the city walls that the real beauty of Cork starts to shine. From friendly people to beautiful scenery and delicious food to interesting history, there’s something for everybody.

We stayed at Cork’s River Lee Hotel, which as a Doyle property is sister to Dublin’s Westbury Hotel and just as impressive. While the hotel is perfectly located on the river and the decor is as Insta-friendly as you’d expect, what really sets this hotel apart is the food, service, and attention to detail. And the fact that it’s as popular with locals as it is with tourists. During our stay, we noticed everything from family gatherings to business meetings and girls lunches to group dinners taking place.

Nothing is too much trouble for the friendly staff and the food menu makes the most of local producers at every opportunity. Toonsbridge burrata, Rockhaven oysters, and the English Market tasting board are all stand-outs from the Grill Room. While a cocktail on the heated covered patio overlooking the river is the perfect way to end a successful day’s exploring.

Our advice? Ask nicely and you may get one of the best Bloody Marys in the city from the River Room, even though it’s not officially on the menu!

Situated in the heart of Cork City, the English Market is a roofed food market and has been trading since 1788. Developed and still owned by Cork City Council, the market is one of the oldest municipal markets of its kind in the world and one of the best. From fish to cheese and bread to spices and desserts, the market truly is one of a kind. Small stalls sit alongside larger businesses. Fledgling traders beside long-established family businesses passed down from one generation to the next bringing together all that’s great about Cork.

Read more:  The American who fled the US for a remote Irish location

To Clonakilty and the breathtaking scenery of the nearby Inchydoney beach. Although it’s a small seaside town there’s plenty to do in Clon and it’s easy to see why it was named 2017’s Best Village in Europe.

We set up camp in Inchydoney Island Lodge & Spa, and found it an ideal base from which to explore West Cork. The hotel itself is built overlooking the beach, with all rooms benefiting from a sea view. Three suite options offer panoramic views of the Atlantic and, if available, are worth the investment. A true home away from home, Inchydoney is the sort of place that makes you plan another visit before you’ve even checked out!

Especially if you get to sample the food at either Dunes Pub or The Gulfstream Restaurant. Fresh seafood is the star of the show, with local meats bringing up the rear. The crab claws were the biggest and juiciest we’ve ever tasted, while the homemade bread and local sausages are only part of the reason we had to walk the beach each morning. And not because we partook in the legendary craic and live music sessions in Dunes Pub! There’s nothing like a hotel bar that’s as popular with the locals as it is with visitors, it makes for a truly special atmosphere which just adds to Inchydoney’s charm.

For true relaxation, visit The Island Spa and enjoy Ireland’s only thalassotherapy spa. Seawater is pumped daily from the ocean into the seawater therapy pool and heated to 31 degrees. Meaning whether you opt to indulge in a treatment or not you’ll still reap the spa’s benefits. However, if we can give some advice here it’s to find the time and indulge in the signature Tropical Ritual, which is exclusive to Island Spa and will revive even the most tired traveler.

Our advice? Take a newspaper (or book if you’re escaping the real world) and pass a few hours in the resident’s lounge, which isn’t open to the general public. Think comfy leather armchairs, a fully-stocked yet discreet bar, delicious food and the sort of peace and quiet you crave after a few days adventuring.

If you’re staying at Inchydoney, then some time spent enjoying the views, the food and the location should be a priority. As should taking advantage of the hotel’s prime location and the beach-related activities it brings with it. Whale watching (yes really) surfing, kayaking, and horse riding can all be arranged locally and are a fantastic way to make the most of the beach. The West Cork Model Railway Village.

Back in Clon itself, a visit to The West Cork Model Railway Village, Ireland’s only Model Village, is recommended. Whether you’re a train buff or not, it’s an enjoyable way to pass a few hours and take a look at an Ireland of long ago. The village has a fully scaled handmade model of the historic West Cork Railway Line with fully functioning trains and the towns that the railway served during the 1940s.

Irish history fans, need to make it their business to visit the home of Clonakilty’s most famous son Michael Collins, who was born in the town and killed nearby at Béal na mBláth, during the Civil War just 31 years later. Collins was instrumental in the Irish fight for freedom, and whether you’re a Dev fan or not, there’s no denying his greatness. Visit the Michael Collins Heritage Centre and Michael Collins House to learn more.

The small town of Castlemartyr is the perfect base from which to explore nearby attractions such as the small towns of Cobh or Youghal or bustling Middleton. 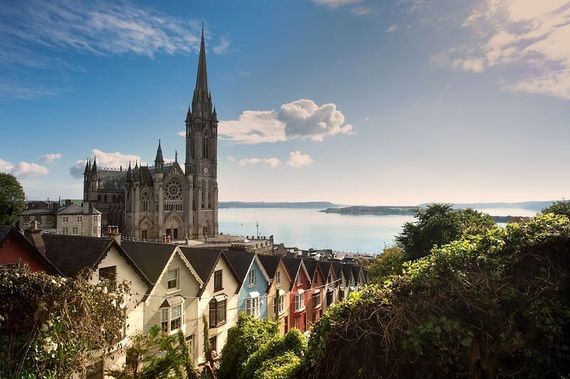 We stayed at Castlemartyr Resort. This five-star hotel is located just 20 minutes from Cork city centre and manages to mix old world charm with modern touches and expectations. Staff are keen to pass on personal recommendations meaning no two days or ever the same. 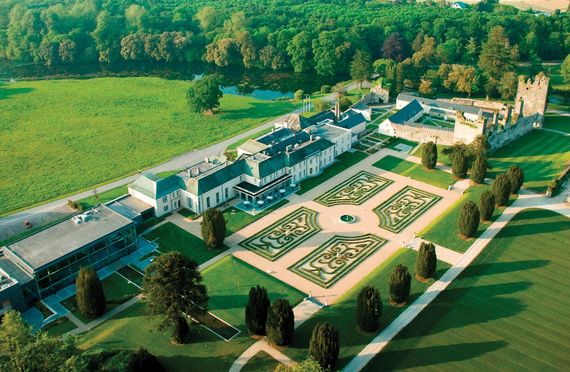 The hotel itself is set in over 200-acres of grounds and is home to centuries of history and tradition. Owners included Sir Walter Raleigh and Richard Boyle the first Earl of Cork, under whose rule the manor house was built. It’s this manor house which now forms the centerpiece of Castlemartyr Resort.

After a day spent exploring the nearby towns, we suggest heading back to the hotel and indulging in dinner at The Bell Tower. Think fine dining where local produce is the star of the show. And the following morning work it all off in the glass-walled swimming pool before heading to The Spa @ Castlemartyr for one of the best massages you’ll ever experience.

If golf is your thing, then you’ll be delighted to hear that Castlemartyr has PGA Pro Alan Gleeson as part of the team. Alan’s wealth of knowledge and experience is invaluable for those looking to start playing or to polish their game. Grab the clubs and get ready to tee off!

We say: Sit back in Knight’s Bar in the manor house and enjoy a coffee, or afternoon tea if you have time, and watch the world go by through the stunning sash windows. 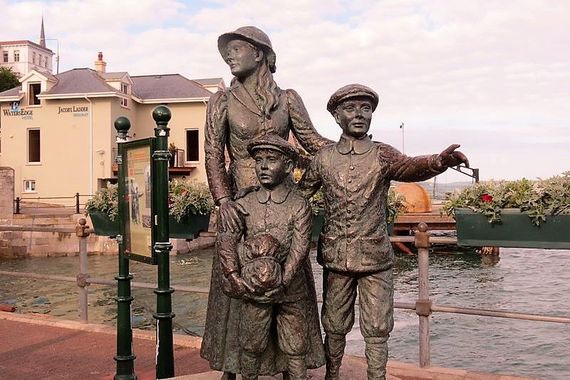 A statue of Annie Moore, at Titanic Experience Cobh.

The ill-fated Titanic left Cobh with an extra 123 passengers, bound for New York, in 1912 and a visit to the Titanic Experience in Cobh brings the whole experience to life. Located in Casement Square in the heart of Cobh Town, the building is actually the original White Star Line Ticket Office, a building steeped in history dating back to the early 19th century and the departure point for many thousands of passengers. Learn about life on board, experience the shock felt when the ship hit the iceberg, and view the original pier which was the last piece of Ireland seen by the passengers.

Forget Guinness, ask any proud Cork person what their favorite tipple is and they’ll reply with a resounding whiskey! A visit to the Old Middleton Distillery is a must if only to understand the care and attention that goes into each bottle. We recommend The Jameson Experience Tour, which is a fully guided tour around the original Midleton Distillery, bringing the stories of Jameson’s rich heritage to life. You’ll learn about the hard-working people and the field-to-glass processes responsible for the whiskey that bears John Jameson’s name.

On this tour, one of the friendly Jameson Ambassadors will guide you around some of the key buildings, including the warehouses and the microdistillery. The tour finishes with a chance to do a guided comparative tasting of three famous whiskeys, one being Jameson.