Christopher Moriarty takes us around the greatest lake in Ireland and one of the biggest in Europe. 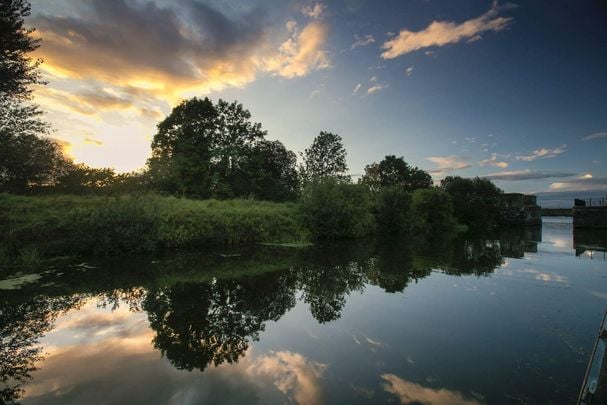 The Toome Canal, as featured on Game of Thrones, in County Antrim, on Lough Neagh. Tourism Ireland / Irish Content Pool

Lough Neagh offers seemingly endless space and distant horizons in the center of the province of Ulster. Ancient history, busy towns and villages, wildlife parks, and walking trails – to say nothing of the lake itself with endless scope for boating and fishing – combine to capture the discerning visitor.

This day trip takes you all the way around the lake and allows time to visit many of its highlights. We begin in the big and bustling Antrim Town, capital of the county of the same name that includes the Giant’s Causeway and the most wonderful coast road. There is a convenient car park close to the Fire Station on the Dublin Road. The antiquity of the town is confirmed by the presence of a Round Tower in a little park on its northern edge. Round Towers were built in monasteries about a thousand years ago, so brilliantly planned and executed that they stand tall to this day – except when they get struck by lightning and have their caps knocked off, as happened to this one in 1819.

While the monks prayed in the vicinity of the Round Tower, invaders in the 12th century built a great mound of earth and a wooden castle, overlooking the Six Mile Water, the river that leads to Lough Neagh. Called a Moate or Motte, the mound stands within the grounds of Antrim Castle and you reach it by way of the Barbican Gate, an intact part of the great stone fortress that took over from the original wooden one. In more peaceful times, the Massereene family who owned the land created a delightful garden amongst the ruins. The comfortable mansion that they built for themselves there was tragically destroyed by a fire in 1922. The garden was neglected but has recently been beautifully restored.

Our first encounter with the lakeshore is made by taking a right turn a little way down the road towards the south, the first turn after you pass the bright new building of the Antrim Forum. This takes you to where the Six Mile Water enters the lake at a very busy point on its shore. There’s a car park and a marina where you may hire boats and, perhaps most important, a pleasant waterside café. A great conglomeration of extremely tame wild duck, black-headed gulls, and a family of swans lives by the river. They welcome visitors who can supply them with bread. A lakeside footpath leads southwards for a mile or so and from it you can look across 12 miles (19 km) of water to the distant shores of County Tyrone. 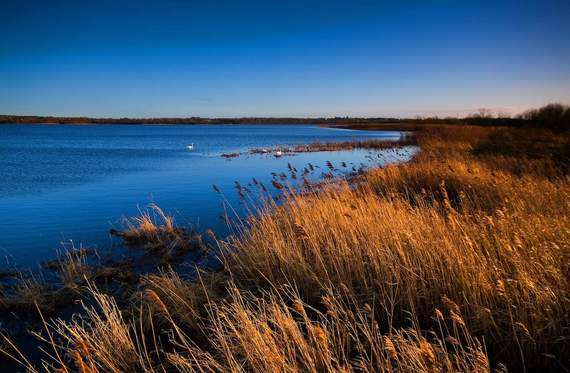 Closer to hand, the wooden platform that stands above the lake a little way offshore is a reminder of the grim days of World War II. Lough Neagh was an important naval base and the platform was built in 1942 for the experimental firing of torpedoes. It was well built and has been adopted as a nesting place by Common Terns, beautiful white birds that come to hunt for small fish in the summer.

Return to the main road and head south for a little over two miles and take the right turn just after you cross Dunore River. Its name translates rather hopefully as ‘Golden Palace’.  The unobtrusive right turn half a mile farther on leads to one of those charming, but very narrow, roads that follow the lakeshore. Take the second turn to the left to leave the lake and go through Crumlin town, then follow the signposts for Lurgan.

Established in the reign of King James I of England by Protestant settlers, Lurgan is a large and prosperous town – but not part of Lough Neagh, so we will pass quickly through it, following the signposts that show the way to the delightful center of Oxford Island and Kinnigoe Bay. This part of the lakeside is a national nature reserve, a spot where wildflowers abound in clearings amongst reed beds and woodland. There is an excellent visitor center, with a restaurant that looks out over the lake. Footpaths and boardwalks make for easy access and there are several hides to allow close encounters with the abundant wildfowl. 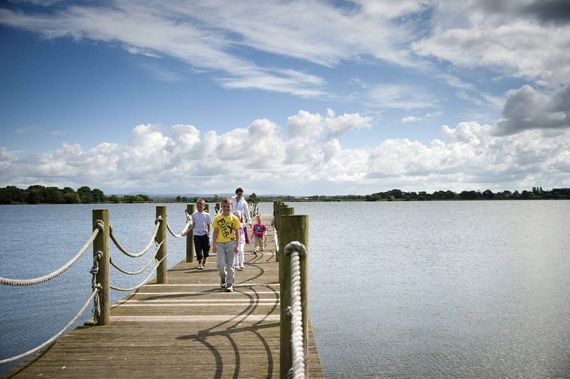 Many byways lead to enticing places on and around Lough Neagh. But they have one drawback. As well as roads, there are rivers leading to the Lough and bridges are few and far between. So the simplest means of proceeding around the lake is to head back towards Lurgan and join the motorway at Junction 10, proceed towards the west, leave it at Junction 12 and follow the signposts to the Peatlands Park. It is a nature reserve, established to preserve an area of peatland with its unique assemblage of wildflowers. Many miles of footpath lead over its gently hilly landscape, a perfect spot for a quiet, contemplative stroll, or you may take a special train ride to view its wonders.

An adventurous route takes narrow roads to the south of the motorway, to cross the River Blackwater and then head northwards across the Coalisland Canal to Washing Bay and on to the village of Mountjoy. The easier way is to join the motorway at Junction 13 and leave it for Coalisland at Junction 14. From the center of Coalisland, you may take the B161 through Mountjoy and then northwards for five miles (8 km) until a signpost to the right shows the way to Ardboe and a very special place of Christian heritage. The Celtic cross of Ardboe was created for the monastery there about a thousand years ago. Sadly worn by the weather in places, some of its sculptured figures are still clearly displayed.  Scenes from the Passion surround a central crucifixion on the head of the cross. Down below, at the base of the shaft, Adam and Eve attempt to cover their nakedness beneath the fruits of a luxuriant apple tree. The cross stands beside a high headland, giving a lovely view of the lake and its quiet water meadows with peacefully grazing cattle. 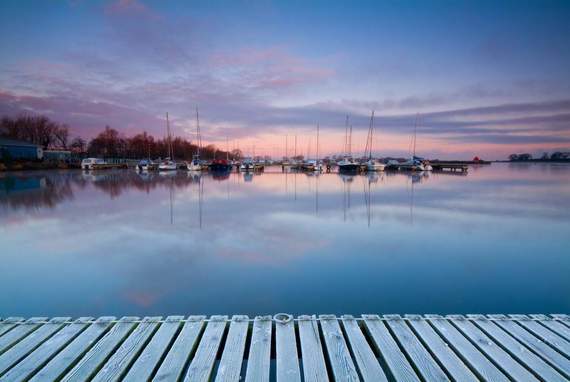 Boats at sunset on Lough Neagh.

Make your way back to the main road and follow the signposts to Ballyronan, where a passenger vessel, The Maid of Antrim, is based and makes tours of the lake. Then continue northwards and turn left for Toome, where Lough Neagh comes to an end and its waters head for the sea along the River Bann. To the right of the bridge, a concrete barrage controls the level of the lake and prevents flooding of the pasture that surrounds it. On the left is the Lough Neagh Fishermen’s Co-operative, which organizes the community of hundreds of men who make a living from fishing for the eels.

From Toome it’s a straight drive back to Antrim Town, though you might make one more diversion by the small roads to take a last look at the lake at Cranfield Bay. There is good accommodation in Antrim Town and in places around the lake. But we moved a little to the north to enjoy the warm hospitality and excellent cooking of Robert and Rachel Thompson at Marlagh Lodge ten miles (16 km) to the north of the town.