Discovering Derry, the legendary city where genius flourished with Heaney, Hume, and more

Derry - the only city in the world where two Nobel Prize winners went to high school together - has a lot to offer. 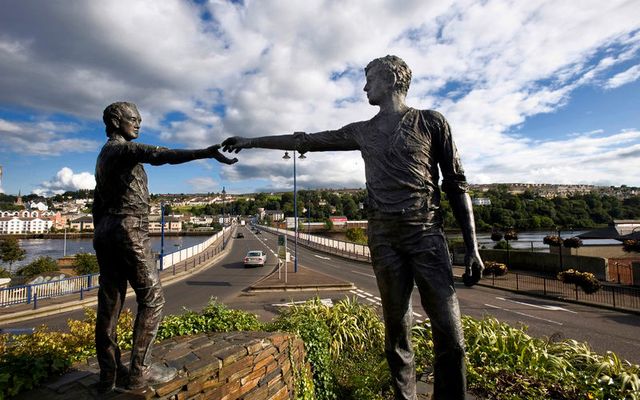 Hands Across the Divide. Tourism Ireland

Derry is a lovely, friendly place: I probably think that because our tour guide, Garvin, seems to know the world and his wife here and someone on nearly every corner is pleased to see him.

It’s a very hilly town and one man jokes to us that that’s why no locals are fat – they burn off so many calories bent over pulling themselves up the city’s many inclines.

And it’s an Irish town too: unlike in Antrim I can see tricolours flying and the flag pins sold in shops come in green, white and orange only.

It’s a European town too: the city voted by a margin of 78.3% to stay in the EU. Had it not been for the two London boroughs of Lambeth and Hackney, each with a slightly higher 78% voting to stay in, the constituency of Foyle would have taken the crown as the most pro-EU part of the whole of the United Kingdom.

And this being Northern Ireland, where political views come shaped in rectangles and flown from lampposts, the blue and gold flag of the EU can be often seen fluttering limply in the wind.

Derry will be the only city in the United Kingdom to share a land border with European Union come 2019, and Garvin worries about what impact a potential hard border could have on the area.

Spiritually Derry remains the capital of the County of Donegal – the Republic’s most isolated county – and the destiny of the two are heavily interlinked. They promote each other to tourists, buy each other’s goods and thousands cross an invisible line every day to work and play in the neighboring county.

No one here thinks a hard border, or a wall, between two such good neighbors, would do anything but damage the peace process.

And the legacy of the Troubles remains an identifiable feature of this city: like almost any municipal building in a city that once fell under British rule the Guildhall, now home to Derry and Strabane District Council, hosts a statue of Queen Victoria. That a council run by Sinn Féin retains a sculpture of the Famine Queen surprised me but look closer and you’ll see that the Empress of India is missing her hands.

The 16-ton statue was attacked by the IRA decades ago and whilst Her Majesty maintains her glum, glowering expression, the statue’s decapitated nature certainly humbles it.

A bust of the last Monarch crowned King of all Ireland’s 32 counties, her great-grandson George VI, stares back at her.

I wonder what the 14 Sinn Féin councillors think when they walk past them on their way to the council chambers.

During the Troubles supporting the party that was then the political wing of the IRA was a minority pursuit here in Derry. For decades the city was a stronghold for the Social Democratic and Labour Party that rejected the armed struggle and pushed for Irish unity through the ballot box. But times have changed and the city that once sent John Hume to Westminster tossed out his successor Mark Durkan in favor of the Sinn Féin candidate in last month’s election by a slim margin of 169 votes.

Despite their victory, Sinn Féin polled a minority of votes but their support is on the up and it is, at least in part, credited to the wave of emotion that swept the nationalist community after the death of former Deputy First Minister Martin McGuinness.

The death of McGuinness was extraordinary: thousands lined the street and Bill Clinton choppered in from New York. Arlene Foster who served with him as First Minister in the final year of his life hesitated before attending the funeral - her father had been shot by the IRA and once on the way to school the group blew up the bus she and her friends were on. 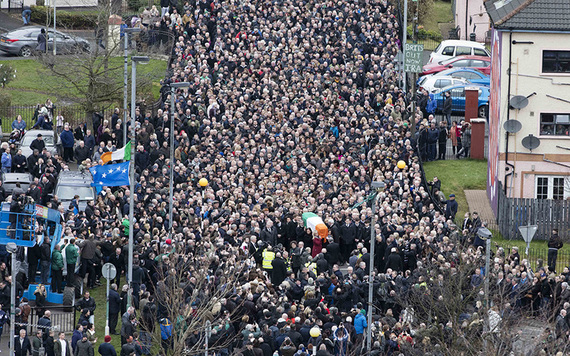 Regardless she arrived dressed in sombre black and was greeted by a spontaneous round of applause from the mostly republican crowd. A friend of mine who grew up in McGuinness’s constituency told me he found that moment extraordinarily emotional.

It was just another sign that the two communities are well on their way to reconciliation now, slowly but surely. Symbolizing this new era is a bridge between the mostly unionist Waterside community on one side of the Foyle River and the mostly nationalist citizens who live ‘Cityside’ is called the Peace Bridge.

A statue of two men extending their hands towards each other is meant to illustrate the healing between the city’s orange and green traditions. In that spirit of respect for the two communities the postcards I buy of Hands Across The Divide, in a studiously neutral fashion, call the city “Derry-Londonderry”. All the others just call it Derry.

Agreement on the city’s proper name remains as elusive as ever but at least young lads from both sides agree it’s good craic to slip a can in between the hands of the two peacemakers.

Drinking has always been a cross-community activity, it’s confirmed to me. Guinness’s nickname in these parts used to be Protestant Black Border.

More recently honoring the war dead has also become something of a cross-community affair. Unionists have long cherished the memories of the boys who fought and died in the two World Wars; now, nearly a century after the guns fell silent in Europe, nationalists have begun to take part in remembrance ceremonies.

35,000 Irishmen died in World War One – most of whom were Catholics and favored home Rule for Ireland – but many returned to find they were not considered heroes but social lepers who served in the hated British Forces.

Hearts have softened in recent years and more Catholics than ever attend wreath laying at the city’s imposing War Memorial.

The town may never have wanted to be British but few will deny the key role it played in the British war effort 70 years ago.

Ships from the navies of the United States, Britain and Canada all dropped anchor in Derry during the course of the war – fresh from long months at sea defending the Atlantic from the Nazi menace.

At one point there were even more US soldiers living in the Derry than there were locals. With their exotic accents and smart uniforms they were a hit with young women. Plenty got engaged to the handsome GIs and bought passages to America; most landed at Elis Island but more than one was sent home heartbroken after her fiancée failed to collect her.

The local lads were jealous of these rich interlopers who lured their women folk away with their fat pay-packets; the city must be one of the few places in the world where the wage gap has historically favored women; there’s always been high unemployment but women usually had more luck finding work in a clothes factory and for some families the wife was sole breadwinner.

Read More: The top 5 places to visit in County Derry

Away from matters of peace and war Derry prides itself on its nickname, ‘The Music City’: the 1970’s band The Undertones hail from the area, Eurovision winner – turned politician – Dana Rosemary Scanlon grew up locally and the famed hymn writer Cecil Francis Alexander moved to the town when her husband was made Bishop of Derry. The next time you sing “All Creatures Great and Small” or “Once in Royal David’s City”, know that it was a Derry woman who wrote the lyrics.

However most extraordinarily of all, the city is the only place in the world where two winners of the Nobel Prize sat side by side in a classroom.

John Hume and Seamus Heaney both attended St Columb’s in the city – something I am sure might get mentioned in school assemblies once or twice a year.

Afterwards we speed off into the countryside to the nearby Seamus Heaney Home Place in his native village of Bellaghy. If you’re ever in Derry be sure to take the detour; the center is a magnificent testament to one of the greatest of all Irish writers.

The manager – the great man’s own nephew – asked if I was familiar with his work. I said I’d done it for exams and my expression clearly betrayed that my school time experience of Heaney was not as fond as it might have been.

Pictures of the people and places important to him in his life are displayed on the wall and the poems he wrote about them can be listened to – read aloud by the man himself.

It’s all very charming and even if you, like me, haven’t grappled much with his poetry since school I would urge you to go. Looking at his work with fresh adult eyes was a revelation and I’ll leave you with a short poem about his native city.

“Derry I cherish ever.

It is calm, it is clear.

Crowds of white angels on their rounds