Mind the women! WW2 US soldiers warned of local rules in Northern Ireland

The first American GIs to reach Europe during WWII landed in Ireland 75 years ago today. 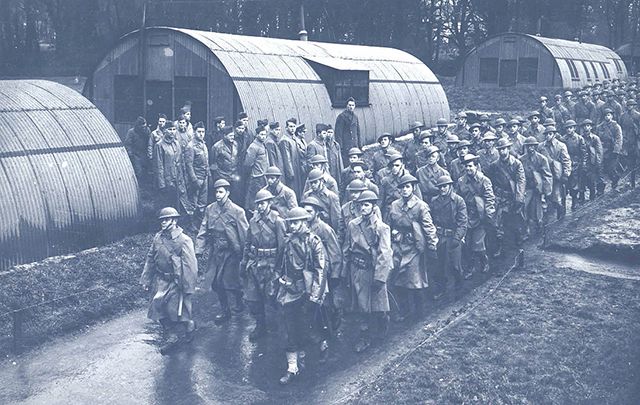 US soldiers arriving in Ireland in 1942. US Army Archives

On January 26, 1942, 37,000 American troops disembarked on Northern Irish soil in the United States Army’s first deployment overseas after the bombing of Pearl Harbor brought the United States into the Second World War. The presence of so many Americans changed this small corner of Ireland forever.

To prepare the young GIs for what was, for most of them, their first trip away from the United States, a small booklet was written to help troops understand life in Northern Ireland. To begin with, they were given two cardinal rules that ring as true today as they did 70 years ago:

There are two excellent rules of conduct for the Amer­ican abroad. They are good rules anywhere but they are particularly important in Ireland:

Perhaps most importantly they were warned to be careful with Irish women.Soldiers were also told not to boast about the power and might of the American military and instead urged to be humble among their new neighbors. However,  inevitably a rivalry sprung up between the American army and the British army based in Northern Ireland.

One day two American soldiers in Belfast heckled two passing British soldiers, "We don't need you here any longer; we'll win the war for you." The two British soldiers placed their hats firmly on their heads, doubled back and threw the two GIs in a water tank they had been casually leaning against. Then the four Allied soldiers went to a bar where they spent the rest of the day drinking together.

Whatever the rivalry between individual soldiers, most of the population – whether Catholic or Protestant – were relieved to see the GIs alight on Irish soil and many US soldiers were surprised by how warmly they were received. Bob Reed wrote home to his parents, “The people, of course, are very friendly to the Yanks. No matter how much they like their homes here, it's their dream to visit America some day. And it's surprising the number of people who have been to the States, or who have relatives there.”

Family ties explain the friendliness of many locals, but for many more their emotions were overwhelmingly that of gratitude as the presence of American soldiers proved beyond a shadow of a doubt that President Roosevelt was committed to defeating Hitler and securing peace in Europe.

Alex Begg, who was fifteen years old in 1942, said the arrival of the GIs was the most important turning point in the whole war for most people in Northern Ireland, “People in Belfast, people all over the country, were absolutely delighted. Bear in mind that we had been fighting a war almost completely on our own. I don't think it ever occurred to any of us that we were ever going to lose the war, but probably those who knew most about it wondered if we could ever win it. But the Americans came into it on Pearl Harbor Day, 7 December 1941, and here in January 1942, a mere six, seven, eight weeks later, we had the first American troops landing in Europe. And I think from that moment on, we felt that it was impossible to lose the war.”

Read More: Irish Pearl Harbor heroes honored on the anniversary of the attack

But it was the women of Northern Ireland whose lives the arrival of the GI’s changed the most; they significantly livened up the usually dreary social scene, much to the dismay of the province’s many social conservatives. In a section entitled simply, “The Girls,” the guide booklet for visiting US troops warned,

“Ireland is an Old World country where the woman's place is still, to a considerable extent, in the home [but] Irish girls are friendly. They will stop on the country road and pass the time of day. Don’t think, on that account, that they are falling for you in a big way.”

That said, thousands of Irishwomen certainly did develop more than a passing interest in the charismatic new arrivals. One woman vividly recalled the excitement that greeted them that cold winter day 50 years on, “The girls went mad; I was married in 1941, I got my sailor. But I used to say, "Oh, I wish I had waited. I would have gone for a Yank." It's as real as yesterday. Because when we look back, it's not really fifty years ago. It's just like yesterday... The courage that the Americans brought! The hope, it was tremendous, it was!”

Undoubtedly the troops brought both fun and heartache for many women – the huge increase in the number of illegitimate births, arrests for prostitution and VD cases attests to that – but equally, in more rural areas, their presence meant young women were often subjected to even tighter social restrictions, as many parents worried the Americans would lead their daughters to “lose their heads” and embarrass their families in a highly conservative society.

They were right to be worried as Church condemnation of women judged to have misbehaved was fierce. In a 1944 sermon the Bishop of Derry thundered that, “I wish I could take some of the people to see the conduct of their girls in Derry – girls from Donegal and Inishowen. It would be better for them to live on potatoes and salt.”

The attention showered on the Yanks was so great that a great number of young Northern Irishmen felt shunned. One local recalled, “Derry men were not too pleased... and thought it grossly unfair competition for the affections of the city’s womenfolk.”

Certainly, by the standard’s of the province, American soldiers were handsomely paid and they were sternly reminded upon arrival,

“Don’t be a show-off with your pay. It adds up to a lot of money in Ulster, and you won’t make any friends by throwing either your money or your weight around. Remember that the private in the British army makes on the average about 50 cents a day… The British soldier is apt to be pretty touchy about the difference between his wages and yours. It is only human nature to wonder why exposure to dying should be quoted at different rates—and such different rates.”

It was a pay rate that came in handy when treating local girls while out on dates.

US military personnel were stationed in Northern Ireland for just over three years, changing the province’s attitudes to Americans and social customs forever.  At the time, some felt overwhelmed by them – their vast numbers in such a small corner of Ireland meant that at times the six counties seemed like one vast training ground for Allied forces.

Ultimately most would go on to serve in some way during the liberation of mainland Europe, thus securing peace in Northern Ireland until the outbreak of the Troubles some twenty years later. Their presence permanently liberalized what had been a grey social scene; something the women of Northern Ireland relished, thousands of whom dated and fell for the rich and handsome visitors who hailed all the way from America.

Today a stone, sculpted with the crests of the US Army, Marines and Navy and the City of Belfast, still stands in the grounds of the City Hall as a memorial to the US troops who served in the province. A further reminder can be found in the city’s war memorial building, a part of which was renamed the Hall of Friendship in honor of the close bonds struck between locals and the US soldiers who passed through Northern Ireland during the conflict.