"In Ireland weather is drama. It’s like one of those soap operas that has been running for so long it has blurred the boundaries between real life and fiction." 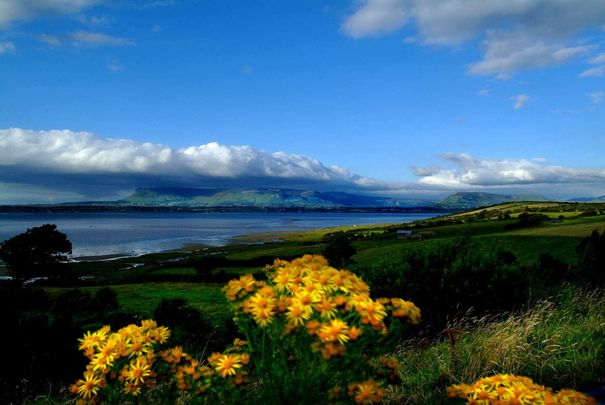 We need to talk about the weather! Leon Ó Cathasaigh takes a biking trip around the stunning countryside of County Sligo in the West of Ireland.

Originally published in the July / August 2021 issue of our sister publication, Ireland of the Welcomes. Subscribe now.

If there is one topic guaranteed to feature in almost every conversation in Ireland, it’s the weather. Weather is our national obsession. We have a compelling need to discuss and debate its latest manifestations and to predict what it has in store for us. As I once heard it described, ‘we have an abundance of weather and it never stops giving’. The most significant characteristic of Ireland’s weather is its changeability. On any given day, in one place we can have showers, hail, thunder and a howling wind, while over the next hill they will report a ‘grand sunny day’ throughout.

In Ireland weather is drama. It’s like one of those soap operas that has been running for so long it has blurred the boundaries between real life and fiction.  The weather soap features the daily travails of its three leading characters, rain, wind and sunny spells. Most episodes involve the interaction of these three ‘amigos’ as they grapple to dominate our lives. A recurring theme is the coalition of wind and rain working in tandem to overwhelm sunny spells by late afternoon. The plot lines twist and turn with cameos provided by ‘mist and fog’ and occasionally ‘violent storms’. However, the drama and excitement reaches a pinnacle with the rare appearance of either of the two prima donna’s of the Irish Weather Saga, a ‘blast of snow’ or a ‘heatwave’. It is said that if ever they come together there will be mayhem beyond compare!

I held these thoughts on a wet afternoon in June when the wind and rain conspired to slow my progress as I cycled along the lower part of Sligo Bay. I was heading for the seaside village of Strandhill, taking advantage of the excellent cycle path. The gale came straight in from the far reaches of the Atlantic and there was a salty flavor to the persistent drops that trickled over my face. I was enjoying the ride! ‘Really?’ I hear you say. But yes, it was exhilarating.

"Waiting on the shore" sculpture in County Sligo.

There’s a kind of snobbery in Ireland between the East and the West when it comes to weather. Those who live on the west coast, facing the full onslaught of the ocean, look down on those in the east who have only the meager Irish sea to contend with. “Aw sure that’s no weather at all” I once heard during an exchange. It was a kind of macho conversation comparing the impact of big storms. “We once had waves crashing over the roof of the house!” The claim was enough to silence the opposing party, no doubt from somewhere in the east.

And then there are the weather shaman. Almost every town and village along the western seaboard has someone who has mastered the art of reading the signs and predicting the weather to come. This is much more than simple meteorology. It’s an older tradition that involves reading changes to the land, the plants and animals, and of course the sky and the sea. These were important skills and much of the weather lore as it is known, still makes sense today. “A mackerel sky is never dry”. That’s very true I thought as I eventually arrived at the beachfront in Strandhill.

Ireland’s beaches, especially in the west, are absolute gems. They are vast, natural and unspoiled. They are places to surf rather than swim and a wetsuit is usually essential. Sunbathing opportunities are rare; however, they are excellent for long walks and exploration of what the shore has to offer. Strandhill is exceptionally blessed with interesting features of environmental significance.

Having stowed my bicycle under the awning of an abandoned shed, I walked the stony beach. My clothes dried quickly from the same westerly that had brought the soaking on the outward journey. There were others out and about, all hardy people, untroubled by the conditions. A sign from Sligo County Council declared ‘Swimming Prohibited’ and it seemed to have its own enforcer by way of a scowling crow perched above. “Dangerous rip tide” I was advised by the man with a dog who seemed to anticipate my question. “Not that anyone would want to on a day like today” he added as he passed, the wee dog scurrying along behind, his tiny paws deftly negotiating the pebbles.

I followed the signs for ‘Shelly Valley’ part of a high dune complex located at the far end of the strand. The dunes were amazing, monsters by any scale. Centuries of wind, rain and lashing sea has shaped a unique landscape of sand mountains, rolling hills and a deep valley with strange shaped structures that would not look out of place in a wild west movie.

I climbed to the highest point. It was a struggle at times as the sand beneath my feet slipped with each step near the top. The view was worth it. The panorama stretched from Sligo in the distance to nearby Knocknarea Hill and then across to Ballysadare Bay and beyond. It was wonderful to overlook the high drama of the weather, as distant clouds swirled ominously along the low hills. You could see a kind of lottery at work; over there by the golf course, people were getting wet, while the sun was brightening the day for the walkers on Culleenamore Strand, not much more than a mile away.  As if to prove the point, a single hailstone hit my nose, then another, then it started pelting and in no time I was cascading down the dunes trying to find shelter in the valley below.

I soon discovered why it is called Shelly valley. The sand is covered in snail shells. Thousands of them, bright and dark speckles scattered curiously in long meandering bands. These strange formations are known as shell middens, the leftovers from people who gathered these mollusks for food in ancient times. The people are long forgotten but the remnants of the sea foraging way of life are still around to tell the story.

It was time to move on. I retrieved my bicycle and headed back out the headland taking the lower shore road toward Ballysadare and onward to the main road south. Later, as I passed from County Sligo to County Roscommon, I stopped at the viewing point overlooking Lough Kee Forest Park. It has magnificent views of the lakes and far beyond and on the hilltop, there is a giant steel sculpture of a Celtic warrior on horseback. I had seen this figure before from the road below but had not appreciated its size or understood its meaning. On that day, as I stood alongside, looking out across the landscape, dark clouds interspersed with bright green patches below, the endless dance of the elements ranging across the plains, I felt I knew what the sculpture suggests. This was the eternal Weather Warrior, an image of a people who for thousands of years, looked out to the land and the ocean, anticipating and accepting whatever is to come. Hail, rain or shine.

Originally published in the July / August 2021 issue of our sister publication, Ireland of the Welcomes. Subscribe now.