Another disappeared beach in Ireland has mysteriously reappeared

“Folklore says the sand comes in once every seven years, it has been roughly 12 years since it was last in." 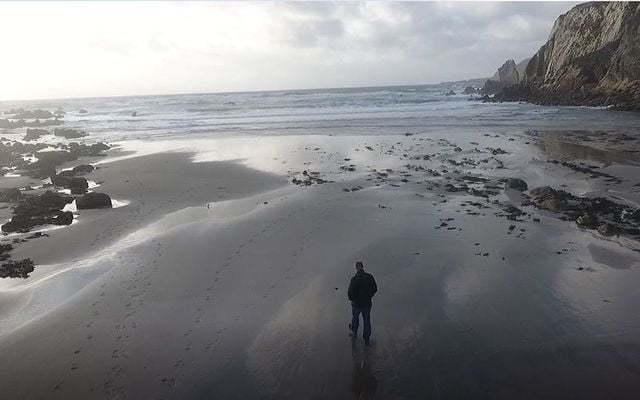 Local Achill Islanders say the mysterious Ashleam Bay reappears every 7 years, but this time it's been 12 years since it last reemerged. Achill Tourism

Another beach has reappeared on Achill Island - only a few months since one was magically washed up by the sands.

The County Mayo island on the Wild Atlantic Way made international headlines back in May after the sea retreated to reveal the pristine sandy white Doonagh Beach that locals had not seen for 33 years.

12 television crews made the trip out to Ireland’s largest offshore island and an estimated 1.16 billion people read about the story online.

Now, a similar phenomenon has happened at Ashleam Bay, where the Atlantic usually crashes against hard rocks and pebbles, but is now lapping up against soft, wet sand.

Another jaw-droppingly beautiful Irish beach has reemerged after 12 years underwater! Ashleam Bay on Achill Island - the very same island where Dooagh Beach reappeared after 33 years in May - is captured in this stunning video from Achill Tourism.

Posted by IrishCentral.com on Friday, November 17, 2017

Local man Malcolm Cooney visits the cove every day and said, “Folklore says the sand comes in once every seven years, it has been roughly 12 years since it was last in.

Thanks to @achilltourism for a sneak peek at Ashleam Bay which has reappeared after twelve years! 🏄🌊🏝 pic.twitter.com/qAXYxMwgd5

“I was a young child and it just created some great memories. And I was always bringing down my own children and they’re never seen the sand. I’m looking forward to them having the same memories as I have growing up.”

Malcolm on the beach

Seán Molloy, who manages the local Tourist Office, told IrishCentral the beach was in, “a very sheltered bay, it bears the brunt of the Atlantic, it faces west and gets the full might of the [sea].”

Read More: Learn Irish for free: How to speak Irish for beginners

The local village nearest to the beach is home to some 70 souls and forms part of the Gaeltacht (Irish language speaking) area of the island.

Many years ago the beach was where fishermen would launch themselves into the sea in order to land a catch to feed their family; but the tide of history has changed the island’s economy and now Achill is far more dependent on tourism.

Since news of the Doonagh beach rippled across the world, the number of tourists visiting the island has increased some 67% Molloy said, adding 79 jobs to the local economy and greatly extending the tourist season with the months of May and September this year as busy as June.

A beach on Ireland's Achill Island reappeared this week for the first time in 33 years! Learn its miraculous story here: http://bit.ly/2qmt6iv

Posted by IrishCentral.com on Thursday, May 4, 2017