Ireland youngster Luca Connell made his Parkhead debut in Saturday’s scoreless draw with French visitors Rennes, days after a tour of Glasgow gave him a glimpse of what life is like as an Old Firm player with Celtic. 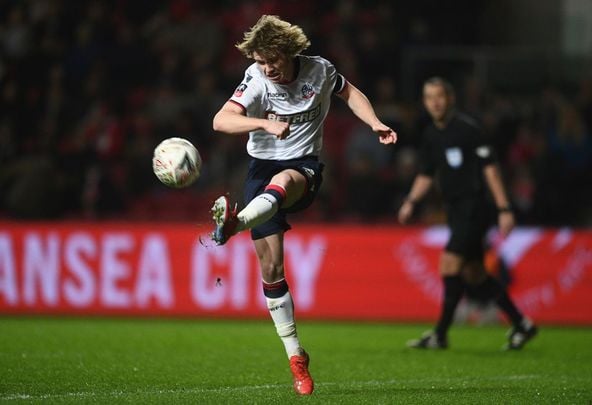 Luca Connell of Bolton Wanderers during the FA Cup Fourth Round match between Bristol City and Bolton Wanderers at Ashton Gate on January 25, 2019, in Bristol, United Kingdom. Harry Trump/Getty Images

Ireland youngster Luca Connell made his Parkhead debut in Saturday’s scoreless draw with French visitors Rennes, days after a tour of Glasgow gave him a glimpse of what life is like as an Old Firm player with Celtic.

The 18-year-old, named by Mick McCarthy in his senior Ireland squad earlier in the summer, has only just sorted the keys to his new apartment in the city after his move from Championship side Bolton Wanderers.

And a quick tour of his new hometown offered Connell an insight into what it is like to be a Celtic hero with one half of Glasgow after he went for a walk through the city center.

Scouser Connell revealed, “I made the mistake of walking into the Celtic shop in town and a few people in there noticed me. It was my first time there so I was just walking past and thought I’d pop in to take a look around.

“There were a few kids in buying shirts but not with my name on the back! They asked for a picture which was nice of them. It was a new thing for me as I was living an hour away from Bolton when I was down there, so nobody knew me.

“Whereas everyone around here is a football fan so they come over and ask me for pictures. I’ve been here and there in Glasgow but I don’t overdo it in the town center.”

Only just turned 18, Connell is adjusting to a new life on and off the field and added, “I was living with my parents before so this is my first time living on my own.

“I’ve just got my apartment sorted in the last few days so I’ll be moving in there soon. I’m looking forward to that, apart from the cooking!

“It’s been very good up here so far. All the lads have settled me in and I’ve got to know more of them better. I’ve made a good few mates. It’s a young group and a few of the reserves have made the step up in training so I’ve bonded with them too.”

Speaking ahead of an hour on the pitch against Rennes, Connell was quick to praise Scottish football.

He said, “The thing that’s maybe caught me most by surprise is the standard of training. It’s very high and a big step up. But I feel I’m doing all right here and getting my fitness back up.

“It’s not been that daunting as the lads have all welcomed me in. I wasn’t shoved to the side or anything. But I knew it was a big thing coming here and there would be pressure on me to try to get a starting shirt.

“I’m willing to work hard to do that. When my chance comes, hopefully, I can take it. There’s a lot of quality in midfield. There are three shirts up for grabs in certain formations and we’re all fighting for the same one.”

Celtic, meanwhile, has rejected a second bid, reported to be in the region of £25 million, from Arsenal for Scotland left-back Kieran Tierney.