LIVE: Updates from the Republic of Ireland's World Cup playoff against Denmark

The Republic of Ireland soccer team gear up for the second leg of their World Cup play off with Denmark this afternoon. Come on you boys in green! 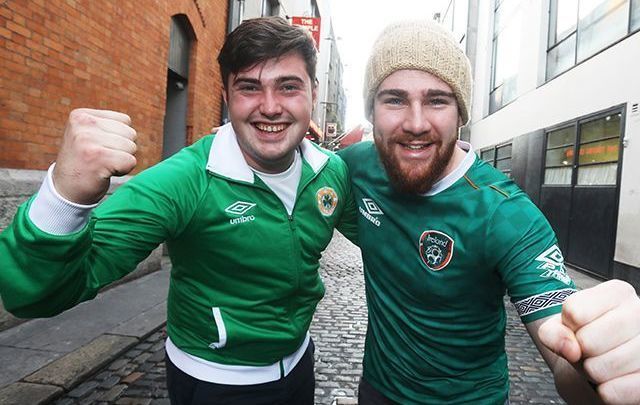 Pictured (L to R) Rory O’Conner with Brian Alone in Temple Bar today ahead of the Ireland vs Denmark football game tonight. RollingNews.ie

The Republic of Ireland soccer team face a crucial World Cup play off game this afternoon which will decide whether this make it to next summer’s World Cup 2018 in Russia.

This week has already seen a shock result with Italy failing to make it to the competition for the first time since 1958, in a surprise 0-0 draw with Sweden at home, having lost to them 1-0 in the first leg.

The Northern Ireland soccer team also faced heartbreak last week losing out to Switzerland after a controversial penalty decision in the first leg of the tie. The US soccer team failed to make it past the Round 1 group stages, ending their World Cup dreams early after an inspiring appearance in Brazil in 2014.

The Republic of Ireland enter this second-leg with goalless draw behind them after the first game last Saturday night in Copenhagen. Anything other than a scoreless draw or a win will see the Boys in Green knocked immediately out of the competition because of the extra weight awarded to an away goal if the Danes succeed in scoring in Dublin this afternoon.

The team will also be relying on their 12th man, the incredible Irish supporters, who are flocking to the Aviva Stadium to sing “The Fields of Athenry” until they can sing no more.

IrishCentral will be following all the action with live updates from kick-off at 2.45 pm (EST):

FULL TIME: An utterly humiliating end for the Republic of Ireland's World Cup campaign which was far from deserved. Their final game can only be described as dire.

“To be Irish is to know, in the end, the world will break your heart”.

The fans are still singing, as ever, and we can't help but think that Russia won't be half as fun without us there. Best of luck to the Danes!

We're signing off to come to terms with another four years without an Irish World Cup appearance.

A brilliant fighting header by @shaneduffy and it's Ireland 1 nil ahead #IreDen #COYBIG #WorldCup2018 pic.twitter.com/lnIDvSKgDV

We hope to see some more performances like that from this man next summer:

90+ mins: Last act of the game a corner kick for Ireland as we enter extra time.

89 mins: And that's officially a damning end for the Republic's World Cup dreams as Bendtner sticks the penalty away after being fouled  by James McClean.

87 mins: PENALTY! Adding salt to the wound with a penalty kick for Denmark. Do you mind if we turn off now?

86 mins:  The Aviva has cleared out fast in Dublin as fans attempt to come to terms with the heartbreak of a devastating second half for Irish football.

83 mins: Classic complaints coming in that Ireland scored too early - a common downfall for us in previous games. Unfortunately, simply outclassed with the help of a superb Eriksen.

The Danes came to Dublin in 988 AD and raped, pillaged and plundered. Just over a thousand years later at the Aviva.... #COYBIG #IREDEN #Ireland #Denmark pic.twitter.com/6ruaYc9xwI

80 mins: Another corner kick for Denmark after Eriksen makes yet another run on goal. Could we see another yet from him? We're into the last ten brutal minutes of play for Ireland fans.

76 mins: Chance for Long just a few minutes after coming on for Ireland but his wait for a goal continues. Denmark still 4-1 ahead.

73 mins: And it's a hat-trick for Eriksen ... The Irish down by three with an impossible comeback looking out of the question. Really outstanding from the Spurs player.

70 mins: Clark comes off for Ireland and is replaced by Shane Long.

64 mins: Irish fans beginning to leave the stadium but plenty of noise and support still to be heard. Miracles do happen!

It’s the hope that kills you. That and the 3 Danish goals. #COYBIG #IREDEN #WCQ18

63 mins: GOAL! Crushing defeat for Ireland yet again with a third Danish goal. Eriksen getting his second of the match. Absolutely superb from him again but that doesn't help the Irish disappointment.

54 mins: Way too much to do by Randolph with another save being forced by Eriksen.

51 mins: Irish keeper Randolph needing to come to the rescue once more with a good save on a strike from Sisto.

50 mins: Sisto having a go for Denmark but missing the mark by a mile.

46 mins: Only 38% possession and one shot on target for ROI in the first half. Here's hoping Hoolahan and McGeady can help improve on that.

45 mins: A double substitution for Ireland: Wes Hoolahan and Aiden McGeady are coming on for David Meyler and Harry Arter.

Just one half of football left to save all our hopes. COYBIG!

A nice bit of optimism for us:

Ireland haven't won 3-2 at home since a friendly with the Czech Republic in February 2000.

Our last competitive 3-2 win at home was against France in October 1981.

We're due one. #COYBIG #IREDEN

45 mins: Second half is about to kick off. Any predictions for the next 45 mins? Can the Republic of Ireland pull through?

Half-time: We reach the end of the first 45 mins with a disappointing first half for Ireland. The Boys in Green have left themselves with an uphill slog if they want to travel to Russia next summer.

Will we see fresh legs coming on for the second half?

31 mins: Denmark 2-1! Irish dreams are currently in tatters with a second goal putting the Danes ahead. Eriksen starts putting the nails in the Irish coffin.

29 mins: Devastating! Denmark make things equal with an away goal which hit off Irish player Cyrus Christie before going in the net. For any of our readers who don't normally follow soccer, an away goal has more weight and so even though it's a draw, Ireland have to score again if they don't want to be knocked out.

23 mins: Much better from Ireland with some great chances at a second goal after Randolph's saves.

20 mins: Another look at that beautiful moment from Duffy -

Throw in for Ireland.

16 mins: Irish goalkeeper Randolph coming to the rescue yet again after some stellar saves last Saturday. Will he be Man of the Match again today? Hopefully, he won't have that much else to do!

Be prepared for the longest 85 minutes of your life. #IRLVDEN #IREVDEN #COYBIG

2.45 pm: An incredible atmosphere in the Aviva as we kick-off. By 5 pm tonight, we'll know whether the Republic are heading to the World Cup or not.

1.45 pm: Team Update - One change has been made from last Saturday's first leg in Copenhagen. Having being suspended from the first game, David Meyler will take back the captain's armband from Ciarán Clarke, replacing Callum O'Dowda in midfield.

Two adjustments have also been made to the Danish team with Andreas Christensen replacing Peter Ankersen in defense and Andreas Cornelius losing out on a spot in attack to Yussuf Poulsen .

The full team listings are:

12 pm: Excitement is mounting as fans make their way toward Aviva Stadium.

Cant wait for later. Hope the Aviva is hopping. Lots of atmosphere, get behind the team!! #COYBIG!!!! ??❤ https://t.co/zuy6rZL7UW

We love getting stuck into the Danish here and we're hoping the boys in green do the same! If you are going out over the weekend take care of your property, particularly mobile phones, purses/wallets. Most importantly, don't get behind the wheel if your drinking! #IREvDEN #COYBIG pic.twitter.com/zFDYzbaS1I

Plenty of Danish fans have also been flooding the streets of Dublin over the past few days:

It was lovely to meet my friend Kai Rasmussen (with glasses) who is nearly as passionate about Irish history as he is about Danish football. He has written this book for Danish schools about Irish history. #IREDEN Will they be smiling tonight? #COYBIG pic.twitter.com/EVDFwR6S9S