Irish UFC fighter Conor McGregor appeared in a Dublin court on Friday after a video of him punching a man in a pub surfaced in August. 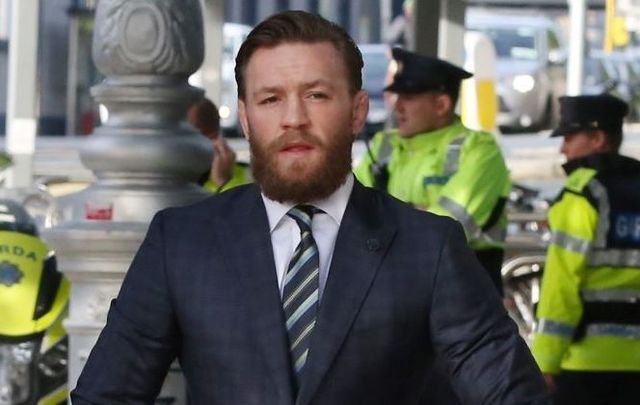 Conor McGregor appeared at Dublin District Court on October 11 after being filmed punching a man in April. RollingNews.ie

Conor McGregor's assault case has been adjourned for three weeks

Conor McGregor appeared in Dublin District Court on October 11 on charges relating to him having punched a man in Dublin pub in April.

In August, TMZ released security camera footage of the Irish UFC fighter throwing a punch at pub patron Desmond Keogh while at the Marble Arch Pub in Dublin on April 6. Keogh had reportedly turned down an offer of McGregor’s ‘Proper Twelve’ whiskey, evidently angering McGregor.

In an interview with ESPN after the incident was publicized, McGregor admitted he was "in the wrong:"

The Irish Independent reports that last week, McGregor was served with a court summons by gardai in relation to the incident. McGregor is accused of one count of assault, and if convicted, faces a maximum prison term of six months on conviction, or a fine, or both.

McGregor appeared in court on Friday with his lawyer, Michael Staines, who requested that the case be adjourned until November 1 pending the disclosure of evidence.

The entire proceeding lasted less than two minutes, according to The Irish Independent.

The video below, from MMAFightingOnSBN, shows the Irish UFC fighter entering and leaving the Dublin District Court, being followed by paparazzi before leaving the scene in a BMW: