Who is Michelle Obama? And does she have Irish roots?

A look at former First Lady Michelle Obama and whether or not she has Irish roots. 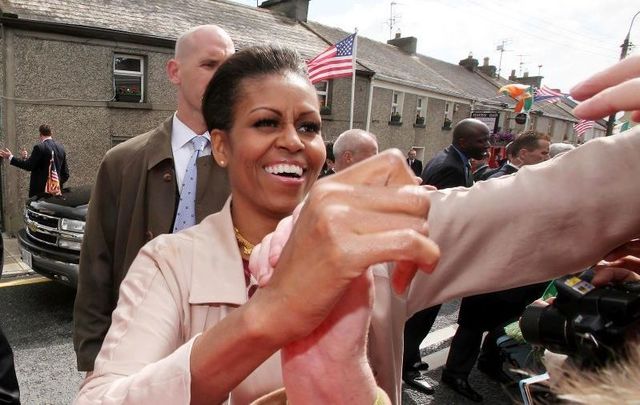 May 23, 2011: First Lady Michelle Obama receives a warm welcome in Moneygall, Co Offaly during her and her husband's Irish visit. Getty Images

Former First Lady Michelle Obama has been an ever-present at Barack Obama's side since the early days of his political career, but who is she? And what are her Irish roots?

Michelle Robinson was born in Chicago and has emerged as a role model for women around the world, overcoming racial discrimination to graduate from Princeton and Harvard Universities and become an attorney with the law firm Sidley Austin.

She said that some of her high school teachers had attempted to dissuade her from applying to Princeton because she was "setting her sights too high" and then claimed that the mother of her white roommate tried to get her daughter reassigned on account of her race.

Notwithstanding these blatant incidences of racial discrimination, Michelle Robinson graduated from Princeton with a major in sociology and moved on to study law at Harvard.

She joined the Chicago office of Sidley Austin shortly after graduating from Harvard, where she met her future husband Barack Obama.

The couple was married in 1992 and Michelle would go on to be a crucial part of her husband's campaigns, shaking hands and greeting supporters during his first Senate run in 1996 and proving even more important during his two presidential campaigns in 2008 and 2012.

She would go on to become the first African-American First Lady in United States history.

She has since delivered keynote addresses at each of the last four Democratic National Conventions and she has worked as an advocate for equality, education and ending poverty since she assumed the role of First Lady in early 2009.

In 2011, Michelle accompanied her husband on his solitary trip to Ireland as President, during which his ancient links to the Emerald Isle were excessively picked over by politicians, the media, and members of the general public.

Less scrutinized were Michelle Obama's Irish roots, which have been examined by renowned genealogist Megan Smolenyak, who has previously contributed to IrishCentral.

In 2016, during another visit to Ireland with her daughters Malia and Sasha, Michelle spoke about the importance of discovering one's roots:

It has never been conclusively proven that Shields is Obama's ancestor, although all available evidence makes it extremely likely.

In any case, it is hardly surprising that people were reluctant to bring up Michelle Obama's Irish roots during her visit to Ireland given their inflammatory nature, but it appears that she is at least as Irish as her husband is.