Edward ‘Mick’ Mannock and Claude Nunney among the 80,000 Irishmen who fought in WWI. 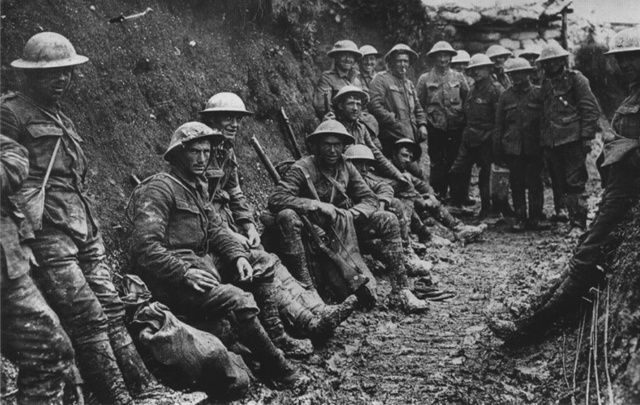 On Aug 4, 1914, when Great Britain declared war on Germany, thousands of Irishmen were already in service with the British Army. Before the end of the first year of fighting another 80,000 Irishmen volunteered.

They came from all over Ireland and for many different reasons, some thought that by fighting with the British army their political goals would be achieved, others felt a sense of duty to fight for King and country and others thought this would be the biggest adventure of their lives.

In 2015 Findmypast added an additional 9,000 records to their Irish National Roll of Honour 1914-1921. In the collection, you can have discover remarkable stories of courage, adventure, and valor. Below are two such stories. Both men died in service and received the Victoria Cross for their bravery, the highest and most prestigious award for gallantry and exceptional bravery in the presence of the enemy.

Edward ‘Mick’ Mannock was the Royal Flying Corps’ most successful pilot during the First World War. He was awarded the Victoria Cross, Distinguished Service Medal, 2 bars and the Military Cross. Mannock was born in Ballincollig, County Cork. His father was a member of the Royal Scots, so he spent much of his childhood traveling. In August 1914, Mannock was working for a telephone company in Turkey. He knew that is was not safe for him there, but before he could leave he was interned in a concentration camp by the Turks for a year. While there he was beaten and kept in solitary confinement. When he was released in 1915, he moved to England and joined the British Army.

He was known to many as ‘Mick’ because of his Irish birth. In the space of twelve months, Major Mannock is credited with 73 kills in air battles, many over France and Flanders. He ‘was an outstanding example of fearless courage, remarkable skill, devotion to duty and self-sacrifice, which has never been surpassed.’ Mannock wrestled with his emotions and the kills he achieved in battle in his private diary. In September 1917 he was awarded the Military Cross for fighting off several German aircraft and downing three German balloons.

Mannock’s service record shows that he was missing in July 1918 and believed to be dead. On 26 July, Mannock had set out with novice pilot Lieutenant D.C. Inglis in hopes to help Inglis achieve his first kill. On their way back to base they flew over the trenches and were hit with heavy ground fire. Mannock’s plane was shot down behind German lines. His body was later recovered 250 yards from the wreck. Major Mannock’s ‘15 Rules’ for pilots was widely used during World War Two despite changes in airplane design.

This second story is about an English born Canadian soldier, who claimed to be Irish. Claude was born Stephen Sargent Claude Nunney in Hastings in 1892. His birth record is available in Findmypast’s England & Wales Births 1837-2006. You’ll also find him in Passenger Lists leaving UK, 1890-1960.

The record includes Stephen Nunney as a passenger from Liverpool to Montreal at the age of 13. He is listed along with numerous other young boys. It is believed they were sent to Canada as part of the Home Children scheme.

Read more: Search for relatives of Irish WWI hero comes to an end

After the passing of the Barnado’s Act in 1891, private organizations had the authority facilitated the transfer of ‘abandoned’ British youths to overseas British colonies where they were placed with employers usually in rural areas. However, not all the children who migrated out of Britain were abandoned or orphaned, many came from destitute families who could no longer provide for the children and it was thought that through migration they could achieve a better standard of life. The main destinations were Canada, New Zealand, Southern Rhodesia and Australia. For many children, the process was traumatic and they were met with harsh working conditions in their new home country. For others, it was a positive experience and created new opportunities for the youths.

In Canada, Claude Nunney was a ward of St. George’s Home in Ottawa and then placed in a rural home near Lancaster. There is little account of his personal experience there. In March 1915 he enlisted with the Canadian Expeditionary Force, 38th Battalion. His official attestation records state that Nunney was born in Dublin and was working as a painter at the time of his enlistment. Because of this false statement of Irish birth Nunney has now been included in the Ireland National Roll of Honour.

During his time in service, he was awarded the Distinguished Conduct Medal for his actions during the Battle of Vimy Ridge in 1917 and then the Military Medal for his actions at Avion in the same year. Claude Nunney was awarded the Victoria Cross, along with six other members of the Canadian Forces, for his bravery in September 1918 at Arras, France. The seven Canadian Victoria Cross winners have since been nicknamed ‘The Magnificent Seven.’ The Canadian soldiers advanced on a heavily defended area. Under intense bombardment of artillery, Nunney lead and encouraged his comrades.

During the first day of fighting, he was wounded but refused to leave the field. On the second day of battle, Nunney inflicted heavy casualties on the German forces, killing 25 gunners, but he was wounded again and had to be taken from the field on a stretcher. Claude Nunney died 16 days later. He can be found again in Findmypast’s History of Stormont, Dundas and Glengarry.

Explore the latest Irish records on Findmypast today and discover if your ancestor was among the thousands of Irishmen who went to fight during the First World War.

* This article was published during a partnership between Findmypast and IrishCentral in 2015.