New York’s Irish Hunger Memorial reopened for a month this summer after a $5 million renovation and now it’s shut for another month. 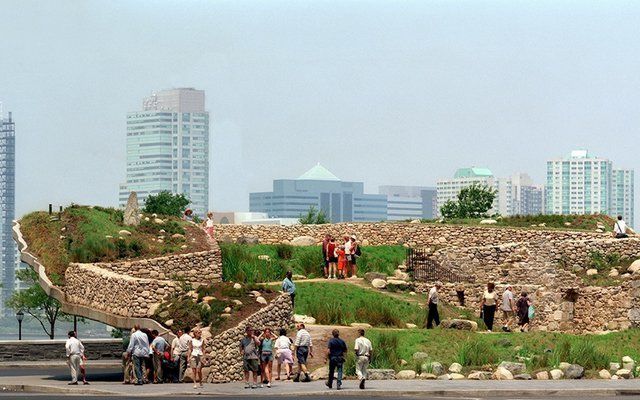 New York’s Irish Famine Memorial has once again been shuttered only a month after it was reopened to great public fanfare.

The 15-year-old memorial in Battery Park on the banks of the Hudson River was designed to represent “a rural Irish landscape with an abandoned stone cottage, stone walls, fallow potato fields and the flora on the north Connacht wetlands. It is both a metaphor for the Great Irish Famine and a reminder that hunger today is often the result of lack of access to land.”

Last year it was shut for a $5 million renovation because of issues with the drainage; the restoration was said to be particularly difficult because of the necessity of recreating the atmosphere of Ireland’s West deep in the heart of Manhattan.

In August Battery Park City Authority President Shari C. Hyman told journalists, “Today it [the memorial] re-opens to stand for coming generations as a place of reflection and remembrance. And just as America has long welcomed immigrants from Ireland and beyond, we’re pleased to once again welcome Battery Park City visitors to experience this poignant tribute to the unbreakable human spirit.”

@NY1 #ny1pic
Where did Manhattan go?!! Paying a visit during our vacation to the Irish famine Memorial 2 days ago. pic.twitter.com/2VfzRRBBSM

Now the memorial is cordoned off from the public by grey fencing and a sign at one of the entrances warns of “DANGER” in stark red letters.

A spokeswoman for Battery Parks City Parks declined to comment on what further renovations were being carried out but said the memorial would be re-reopened for the public in mid-October.

However, the radio presenter Adrian  Flannelly, who served as the memorial's Irish liaison, was able to shed some light on the mystery and said the closure was “very temporary”.

All that is being done, he said, is the replanting of the flowers.

“They have to be replanted exactly as it was,” he told IrishCentral.

“Final touches on the outside area near the front” were also being added, he continued.  “This now is the final stage.”

We appreciate the explanation but why not have made the final -final repairs and flower planting while the memorial was closed down rather than have visitors turned away?