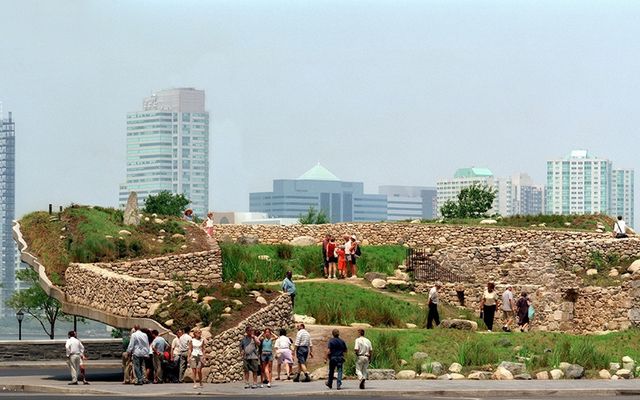 After a nearly year-long renovation that cost more than $5 million, the Irish Hunger Memorial in downtown Manhattan reopened for visitors on Friday, July 28.

The memorial, according to its official description, “represents a rural Irish landscape with an abandoned stone cottage, stone walls, fallow potato fields and the flora on the north Connacht wetlands. It is both a metaphor for the Great Irish Famine and a reminder that hunger today is often the result of lack of access to land.”

The restoration project at the 15-year old memorial located in Battery Park City, overlooking the Hudson River, commenced after the site was closed a year ago last August because of waterproofing and drainage issues -- some of which were related to Hurricane Sandy in 2012 -- which caused significant decay to the tourist attraction.

“The Irish Hunger Memorial was first dedicated 15 years ago this month; today it re-opens to stand for coming generations as a place of reflection and remembrance. And just as America has long welcomed immigrants from Ireland and beyond, we’re pleased to once again welcome Battery Park City visitors to experience this poignant tribute to the unbreakable human spirit,” Battery Park City Authority President and COO Shari C. Hyman said in a press release.  The authority footed the $5.3 million bill for the renovation.

According to a report in the Tribeca Trib newspaper, the renovation process was especially difficult because the landscaping, reproduced from Ireland, had to be re-assembled just as it was.

All of the stones on the memorial, which sits on a half-acre at Vesey Street and North End Avenue, “had to be removed, taken down and catalogued, and soil was removed and in some cases brought back,” Gwen Dawson of the Battery Park City Authority said.

“All of those stones got put back in the right place.  Our contractor has done a spectacular job.”

Before and after: The New York’s Irish Famine Memorial before its reconstruction.

The plantings and vegetation will be fully replaced in September, the report added.

“The 96’ x 170’ memorial, designed by artist Brian Tolle, contains stones from each of Ireland’s 32 counties and is elevated on a limestone plinth. Along the base are bands of texts separated by layers of imported Kilkenny limestone. The text, which combines the history of the Great Famine with contemporary reports on world hunger, is cast as shadow onto illuminated frosted glass panels.

“Central to Tolle’s project is an authentic Famine-era cottage donated to the memorial by his extended family, the Slacks of Attymass, Co. Mayo. The cottage has been painstakingly reconstructed on the memorial’s half-acre site as an expression of solidarity to those who left from those who stayed behind.”

The New York Times raved about the memorial when it opened in 2002.  Critic Roberta Smith said it struck a “deep emotional chord” and expanded “the understanding of what a public memorial can be.”

The memorial’s cultural liaison was Adrian Flannelly, the long-time Irish radio show host. Flannelly was one of the driving forces behind the creation of the memorial, which is open every day from 11 am until 6:30 pm and is free of charge.

Read more: Famine era letters to the US document the horrors of the Irish holocaust