A unique round tower in Massachusetts built by 19th century Irish immigrants stands as one of the only round towers in the United States. 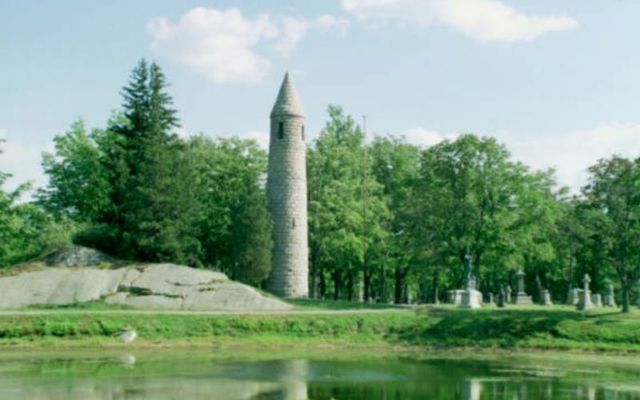 The Milford Round Tower stands as a memorial to Irish immigrants in Massachusetts. Wikimedia Commons

A unique round tower in Massachusetts built by 19th century Irish immigrants stands as one of the only round towers in the United States.

The Milford Round Tower at St. Mary's Parish in Massachusetts, created by Irish parish priest Father Patrick Cuddihy, was completed in 1896 as the focal point of the church's new cemetery.

Fr. Cuddihy had bought the land for the cemetery in 1890 to cater for Milford's Catholic community and envisaged a unique round tower to stand in the center of the sacred ground and so he set to work making his dream a reality.

The work has undertaken by a predominately Irish workforce, with local carpenter John F. Kellett building the staging for the tower and local Irish stonemason Patrick Ferguson working on the tower's construction.

Ferguson, a prominent stonemason in Massachusetts, had emigrated to the United States from Westport in County Mayo and worked with a number of Italian immigrants who were skilled in stone-cutting to complete the ambitious project.

The round tower, consisting of Milford Granite, was completed by 1896, but it appears as though Fr. Cuddihy missed its unveiling.

The Irish priest was traveling back to his native Ireland on board the Scythia at the time of the tower's unveiling. according to newspaper reports at the time.

When asked by a friend why he decided to build the tower, Fr. Cuddihy said that he wanted it to stand as a beacon for Irish people to travel to in the United States.

"It may be folly - yet when you and I have passed away, the Irish in America will make a pilgrimage to the Irish Round Tower at Milford," the Clonmel Chronicle reported at the time.

It is unclear which Irish round tower provided the inspiration for Fr. Cuddihy's project, but it is abundantly clear that the idea came from Ireland.

Some reports claim that the inspiration came from iconic structure in Glendalough, Wicklow, while others claim it from the Rock of Cashel in Tipperary where Fr. Cuddihy grew up.

But inspiration most likely came from a round tower on Devinish Island in Lough Erne, County Fermanagh. The tower is almost the exact same height and scale as the Milford Round Tower, which is almost certainly its copy.

Whatever its inspiration, the Milford Round Tower stands as a testament to Fr. Cuddihy's native Ireland and a point of interest for Boston tourists who stray off the beaten track.

It is one of the few round towers to exist outside of Ireland and stands over the graves of thousands of Irish immigrants who were buried in the cemetery in the knowledge that they would be laid to rest in an Irish setting, even if a return to Ireland was impossible.