Dr. Lara Cassidy reveals in an Irish documentary that people who inhabited Ireland some 10,000 years ago had dark or black skin and bright blue eyes. 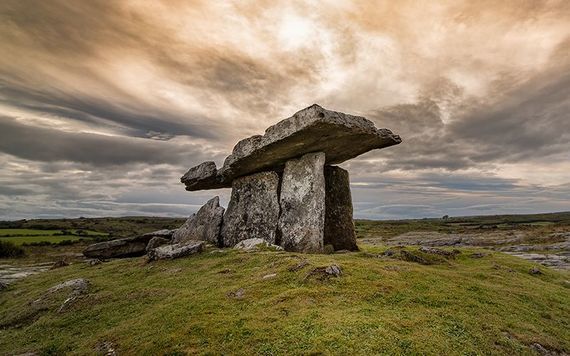 The Burren in County Clare Getty

Prehistoric Irish people were dark-skinned and had blue eyes, an irish documentary claims.

People who inhabited Ireland some 10,000 years ago had dark or black skin and bright blue eyes, geneticist Dr. Lara Cassidy reveals in the 2021 Irish documentary "The Burren: Heart of Stone."

Scientists have been developing a genetic database of ancient Irish genomes from all periods of pre-history to understand how the modern Irish gene pool came to be.

According to the new documentary, this prehistoric hunter-gatherer population that arrived some 10,000 years ago did not have any of the pigmentation profiles associated with light skin.

They operated mostly along the coast of the Burren gathering shellfish and then moving inland to hunt wild boar and gather hazelnuts. They inhabited the island for 4,000 years before being replaced by settled farmers.

Katrina Costello’s incredible documentary concludes with a look at the clues written in the stones, tombs, and underground caverns that populate #TheBurren, revealing fresh secrets of the human story.

The earliest evidence of farmers in Ireland is found in The Burren, a region in County Clare that features a landscape of bedrock with a vast cracked pavement of glacial-era limestone, with cliffs, caves, fossils, and rock formations.

The early farmers, who arrived about 6,000 years ago, cleared trees with stone axes and built dolmens that populate the area to this day.

“The Burren area is an amazing time capsule," Dr. Cassidy told the Sunday Independent. "It has one of the richest archaeological landscapes in Europe.”

Dr. Cassidy noted that the last major movement of people into Ireland occurred about 4,000 years ago, which helped establish "the modern Irish gene pool as we know it today."