1841 - The Cork Examiner, now The Irish Examiner, hits the streets for the first time

The first edition was published on Monday, August 30, 1841, four years before the Great Famine. 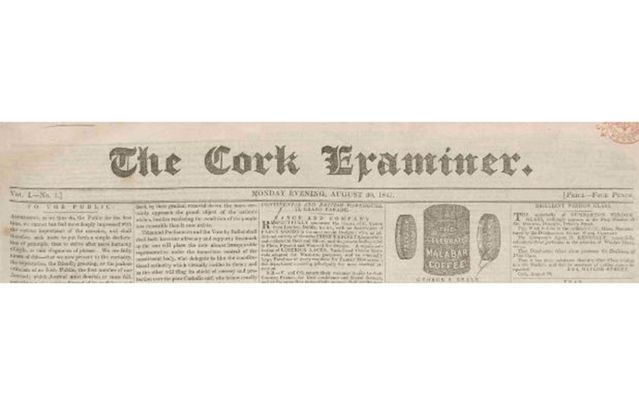 The first edition of The Cork Examiner, August 30, 1841 Findmypast

Today, 179 years ago, The Cork Examiner, which can be considered a national newspaper with a regional emphasis, was first published.

From advertisements posted by our ancestors to emigration notices placed by shipping companies, our old newspapers are a treasure trove of social history.

The Cork Examiner was published three times a week – on Mondays, Wednesdays and Fridays – and cost four pence. In July 1861, it became a daily newspaper, except Sunday, and the price dropped to three pence.

The first edition was published on Monday, August 30, 1841, four years before the Great Famine. The front page, in common with other newspapers of the time, was dominated by advertisements and notices.

Advertisements are not only great for those of us with ancestors in business, they give all of us an insight into the lives of our ancestors and the sorts of goods and services they might have bought and used. They are a reflection of the times our families lived in.

One noticeable ad from the first edition is one for coffee which declares that ‘Housekeepers will find coffee more economical than tea, since the great advance in price of that article.’ The sales pitch in favor of coffee over tea relates to the war between Britain and China which was fought in the late 1830s and early 1840s. The war prevented imports of tea from China, the main supplier at this time. Indian tea plantations were still relatively new and unable to meet demand. And when supply cannot meet demand prices rise.

The emigration advertisements placed by shipping companies bring home the sheer volume of people leaving even before The Great Famine. One notice, which offered free passage to Australia and the promise of well-paid jobs in their new home for those in particular trades, shows that the motivation to leave was not always to escape, but also the promise of a better life. In the advertisement passage, victualing (food) and bedding are listed separately to emphasize the huge saving being offered.

In the nineteenth century food rations aboard ships were basic and those who could afford it brought additional food & bedding aboard to augment the often unfamiliar foods being offered and make the basic accommodations offered on board more comfortable. Many arrived at their destination with few belongings and no money after paying their passage, so the offer of free passage would have been an enticing one.

A lot of things in the papers make us reflect on the differences between life today and that of our ancestors. Entertainment was not something that could be had at the touch of a button. A trip to the theater to hear the latest music and see a variety show would have been a real treat, the one shilling tickets, however, might have been out of the reach of the poorer laborers. The program on offer at the Theatre Royal in Cork in the newspaper’s first copy is a mix of music, tragedy and farce – "Pizarro," "The Irish Tutor" and "The Railroad Station." Pizarro was written by Irish playwright Richard Sheridan in 1799 and was still being played twenty-five years after his death. The tragedy is a dramatization of the conquering of Peru by Francisco Pizarro in the sixteenth century.

The Cork Examiner gives extensive coverage of parliamentary debates, mostly drawn from other newspapers. Reprinting reports from other newspapers was quite common in the nineteenth century. Reports from parliament gave readers a sense of the wider world around them, in a time when most people lived out their lives in the villages where they were born. Among the names of the parliamentary debaters is Smith O’Brien who was the subject of the William Smith O’Brien Petition, a petition of 80,000 names asking for clemency for Smith O’Brien who was sentenced to death for his part in the 1848 Young Irelander uprising.

Newspapers are a great way to immerse yourself in the life of your predecessors, from the minutiae of everyday life to the political movements of their time.

* This article was published originally in 2014 as part of a partnership between IrishCentral and Findmypast.