Why did an earl’s sister dedicate herself to fighting for Irish freedom?

Albina Broderick: The English Aristocrat who dedicated her life to overthrowing the colonialism her own family had brought to Ireland. 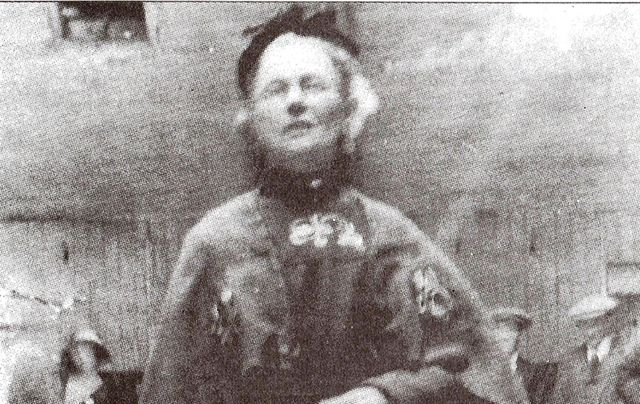 The Honorable Albina Lucy Broderick was born on December 17th 1861 into a family of English aristocrats and absentee Irish landlords. Although born with fabulous wealth, her life’s work would be a rejection of the privilege her family had enjoyed for centuries and few sacrificed more for Irish freedom that the daughter of the 8th Viscount Midleton.

But if her old age and middle years were characterized by her radicalism, her early years were utterly ordinary; she grew up on her father’s country manor in Surrey near London, received a fine education at home and traveled across much of Europe as a young woman.

Politically in her youth she conformed to those of her imperialist, conservative family; young Albina used to read to newspaper to her half-blind father but only on the condition that she would never mention the name of one William Gladstone - the British Prime Minister who made several valiant, yet doomed, attempts to give Ireland a Home Rule Parliament. In 1910 her brother William, the first Earl of Midleton, had become the leader of the Irish Unionist Alliance in southern Ireland and spent much of his political career trying to thwart Irish independence. The young Albina shared her brother’s loyalism, if not his “low opinion of the Irish”. She once wrote unionist poetry but regular visits to her father’s country estate in Cork began to gradually change her views on the native Irish and the Earl’s sister became an ardent republican with all the zeal of a convert.

Aged 42 Broderick trained as a nurse and moved to Dublin to practice as a midwife. Around this time, she developed an interest in social reform and the rights of her fellow nurses. It was the first step in her journey away from arch-conservative to Irish revolutionary.

Next, she took an interest in the Gaelic League and the revival of the Irish language that was flourishing the length and breadth of the island. She began to pay regular visits to impoverished Irish speaking areas of the country and was appalled by what she saw. It was the catalyst for the course of the rest of her life and like many revivalists she Gaelicized her name to Gobnait Ní Bhruadair.

In 1907 her father died and the newly wealthy Ní Bhruadair moved to south Kerry where even the Government had noticed the locals were close to starvation. She paid £40 for 13 and a half acres of land and set about building a hospital. By 1912 there was a farm, a workhouse, a store and a co-operative shop on the land but the construction of the hospital itself was not quite finished. Lacking the money, she sailed to America and raised the rest of it there; her gamble paid off and by 1913 the co-operative shop had annual turnover of £3,000.

Poverty in Ireland in the early 1900s.

In 1914 the armies of Europe were mobilized against each other and Ní Bhruadair offered the British Army the use of the hospital for injured troops. Whilst in later years Irish republicans did their best to brush under the carpet the service of the 200,000 Irish soldiers who fought in the Great War, then most of Ireland supported the war as one that aimed to free small, Catholic Belgium from the barbarous clutches of Germany.

But her sympathy for the British Army was confined to its actions on the European continent; when the fighting broke out in Dublin on Easter Sunday in 1916 Ní Bhruadair’s support for the rebel republicans was unconditional. She joined Sinn Féin and Cumman na mBan (the women’s IRA) and visited Frongoch Prison in Wales where the majority of volunteers had been sent.

After the end of the war in November 1918, she volunteered many hours of her time canvassing for Sinn Féin in the General Election held the month afterwards and, mere months after women’s suffrage was granted by the British Parliament, was elected to Kerry County Council under the Sinn Féin banner.

After news reached the Blacks and Tans that she was hiding IRA members, her home was frequently subjected to random searches. Her implacable opposition to British rule in Ireland was stiffened further by her work with the Irish White Cross, with which she worked tirelessly to distribute food parcels to the needy wives and children of IRA volunteers.

The Black and Tans in action.

When Michael Collins signed the Anglo-Irish Treaty that partitioned Ireland in 1921, Ní Bhruadair found herself on the opposite side to most of her fellow citizens and was unapologetic in her complete rejection of the Treaty. She was a talented speaker and deployed regularly by anti-Treaty forces across Kerry to convince crowds of the foolishness of accepting any agreement that kept Ireland in the British Empire.

The end of the Civil War did not dampen her disdain for the Free State and in 1923 she was shot in the leg after she refused to stop her bicycle for soldiers to inspect. For her crime she was jailed in Dublin where she promptly went on hunger strike, forcing them to release her within two weeks.

Her imprisonment did her standing in Sinn Féin no harm and she served as a the party’s Munster delegate at its 1926 party convention. Her involvement with Cumann na mBan came to a sad end in 1933 after the organization abandoned its emphasis on militant nationalism in favor of social reform. Her new party, “Women of the Republic”, attracted few members.

For all the political ups and downs in her long and radical life, she had several constants; her regular branch meetings of the Gaelic League in Tralee and the harmonium she played weekly at a Protestant Church service in her adopted home town of Sneem, Co. Kerry. Doubtless her fellow worshippers - mostly of unionist sympathies - thought little of her paramilitary activities but she was in the words of one biographer, “a woman of frugal habits and decided opinions, she was in many ways difficult and eccentric.”

Her death in 1955 at the grand age of 93 would launch legal challenges that lasted more than two decades. Her will declared that her sizeable £17,000 estate would go to republicans “as they were in the years 1919 to 1921.” Such a request was always going to be challenged in court and it was not until 1979 that a judge ruled her last will and testament “void for remoteness.”

Ní Bhruadair lies buried in the Protestant graveyard in the parish of Sneem, where a room in the local museum is dedicated to her remarkable life.