WATCH: Waterskiing in the freezing Irish Sea on Christmas Day, 1961

Brr! The Irish Film Institute presents "A Wet Christmas in Howth" where waterskiers take to the freezing cold Balscadden Bay on Christmas Day in 1961. 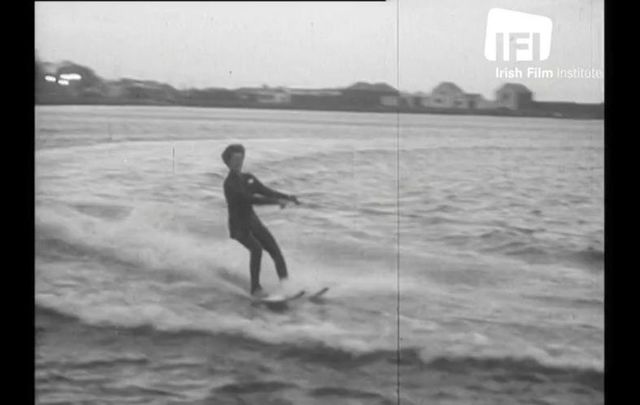 What better way to spend Christmas Day than waterskiing in the freezing-cold Irish Sea?

In the short Gael Linn newsreel video "A Wet Christmas in Howth," Mr. and Mrs. Carr brave the cold waters at Balscadden Bay as onlookers, in awe of this chilly Christmas tradition, cheer them on. Howth and Martello Tower are just visible in the distance.

This traditional Christmas swim continues still in Ireland today with dippers braving the chilly waters (often for charitable purposes) from one end of the country to the other.

About Gael Linn and Amharc Éireann

Produced by Gael Linn, "A Wet Christmas in Howth" is part of Amharc Éireann (A View of Ireland), Ireland’s longest-running indigenous newsreel series.

In 1955 Ernest Blythe, Chairman of Comdhail Naisiunta na Gaelige, lent Gael Linn £100 to produce a short film for cinema and the Amharc Éireann (A View of Ireland) newsreel was born.

From 1956 to mid-1957, Amharc Éireann consisted of short single-story items that were distributed to cinemas throughout the country on a monthly basis. Their popularity was immediate and by mid-1957 the Rank Film Distributors agreed to supply them to Irish cinemas along with their own newsreel, at which point they became issued on a fortnightly basis.

Produced by Colm O’Laoghaire, a total of 267 editions of Amharc Éireann were made. Although Gael Linn’s Amharc Éireann production ceased in late 1964, its influence is ongoing. The range of Irish interest subjects covered (from hard news stories to more magazine-like items) provide a vivid window into the development of modern Ireland at a particularly progressive point in its development and provide a first-hand insight into the moral, cultural, and economic development of the country throughout the Whittaker and Lemass eras.