The amazing stories of Violet Jessop and her multiple brushes with near-death while at sea. 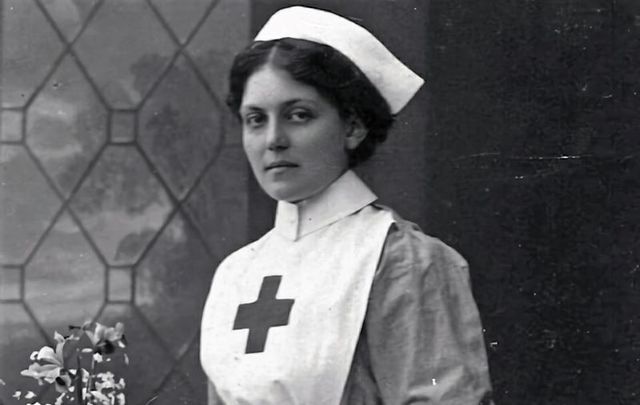 Violet Jessop was an incredibly lucky woman who survived the sinkings of the Titanic and the Britannic as well as a major accident on the Olympic.

Born in 1887 in Argentina to Irish immigrants, Jessop contracted tuberculosis at a young age and was expected to survive only a few months. She somehow recovered and went on to live a long, healthy life, reports TodayIFoundOut.

After her father died, Jessop’s mother moved the family to England and began working as a stewardess on a ship. When she became ill, Violet, who was attending a convent school, stepped in to become a ship stewardess herself.

Only 21 years old, Violet had difficulty finding a job as a stewardess as employers feared her youth and good looks would “cause problems” with the crew and passengers. (In fact, she did receive at least three proposals, including one from a wealthy first-class passenger, over the course of her career.)

Violet decided to make herself look frumpy with old clothes and no makeup, and after a short stint on the Orinoco, a Royal Mail Line steamer, she was hired by the White Star Line in 1908 to serve aboard the Majestic.

In 1910 she began working aboard the Olympic. One year later, the Olympic collided with HMS Hawke, a ship designed to sink ships by ramming them. Although both ships sustained considerable damage, the ship did not sink and made it back to port. Violet disembarked without being harmed.

A couple of years later, the White Star Line was looking for crew to cater to the VIPs sailing on the Titanic. Violet took a job on board the “unsinkable” ship. She escaped the ship’s sinking in lifeboat 16.

“I was ordered up on deck. Calmly, passengers strolled about. I stood at the bulkhead with the other stewardesses, watching the women cling to their husbands before being put into the boats with their children. Sometime after, a ship’s officer ordered us into the boat first to show some women it was safe,” she wrote in her memoir.

In the lifeboat, Violet was handed a baby to care for. When they were rescued by the Carpathia, the baby’s mother trapped the baby out of Violet’s arms and ran off.

Having survived that disaster, Violet decided to serve as a nurse on board the Britannic, which was operating in the Aegean Sea just before World War I. The ship sustained damage and started sinking after it ran into a mine that had been planted by a German U-boat.

“I leapt into the water but was sucked under the ship’s keel which struck my head. I escaped, but years later when I went to my doctor because of a lot of headaches, he discovered I had once sustained a fracture of the skull!” she said.

After the war, Violet left the White Star Line to work for the Red Star Line and worked on a ship doing world cruises for several years. Luckily, she was able to avoid any further ship disaster and retired at the age of 61. She died in 1971 of congestive heart failure at the age of 84.