Archaeologists believe the child may have died by an act of violence. 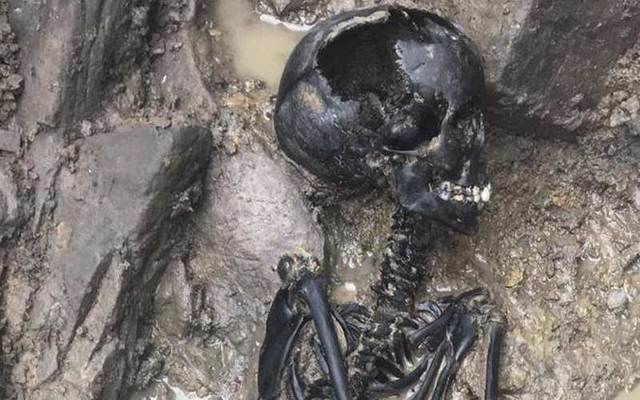 Skeletal remains of a Viking child have been found at a dig site in Dublin. Facebook/Alan Hayden/Archaeological Projects Ltd

Excavations of a Viking settlement near Dublin Castle uncovered the skeletal remains of a child from the early Viking period.

Archaeologists believe the child may have died by an act of violence.

The dig in September 2020, led by Alan Hayden from the University College Dublin, took place near the original Dubh Linn, or black pool, that gave Dublin its name.

The remains were discovered where the River Poddle would have entered the pool near the River Liffey, reports RTÉ.

The River Poddle was culverted in the 12th century and covered over completely in the 18th century.

The skeleton, which was found largely intact, is thought to date from the 9th and 10th century. The child would have been between 10 and 12 years of age at the time of death.

Incredibly well preserved adolescent skeleton from the base of the later (10th/11th century) channel of the Poddle. She was evidently wrapped in a shroud or bag before being placed in the river.

It appears the child was wrapped in a shroud before being thrown into the river. An iron buckle or fastener was also found with the remains, and the shoulders of the skeleton were hunched together.

Hayden said the fact the child was not given a proper burial and instead dumped in this way suggests an act of violence.

The excavation is being carried out by Archaeological Projects Ltd. on the site of an office development on Ship Street next to Dublin Castle. The dig, which has been going on for many months, already uncovered that the original Dubh Linn was much larger than originally thought and extended beyond the walls of Dublin Castle.

Archaeologists have now found that the size of the original Viking settlement, or Longphort, is double the extent previously established. In the 10th and 11th centuries, the area of the settlement would have extended from the present day Molly Malone statue on Suffolk Street to St Patrick's Cathedral.