How Katie Gilnagh of Rhyne, Esker, Co. Longford, survived the tragic sinking of the RMS Titanic. 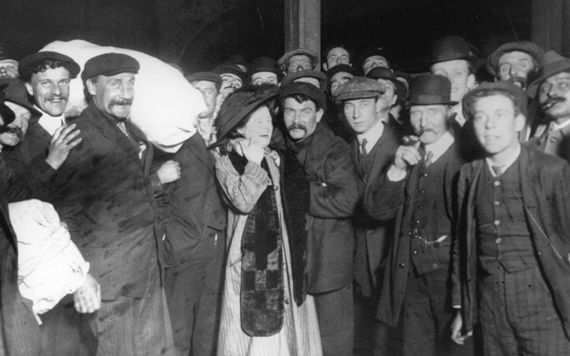 How Irish woman Katie Gilnagh survived the tragic sinking of the RMS Titanic.

On April 14, 1912, the White Star Line ship the RMS Titanic, struck an iceberg off Newfoundland. In the early hours of April 15, the Belfast-built Titanic sank, killing over 1,500 passengers and crew on board. This was one of the deadliest commercial peacetime maritime disasters in modern history and among those on board were many Irish.

The below is an extract from the book “The Irish Aboard the Titanic” by Senan Molony which tells the tales of the people who were on board the night the ship went down. This book gives those people a voice. In it are stories of agony, luck, self-sacrifice, dramatic escapes, and heroes left behind.

Katie Gilnagh survived because of a white lie. When she finally gained the upper deck, she was told that lifeboat No. 16 was too full and she could not go. As the boat began to descend, Katie cried: ‘But I want to go with my sister!’ The crewman hesitated and suddenly relented. She could get in.

‘God help me, I told a lie,’ she told the New York Daily News on the fiftieth anniversary of the sinking in 1962. ‘At first, they didn’t want to let anyone else into it because it was overcrowded. I said that I wanted to go with my sister. I had no sister aboard. They let me get in, but I had to stand because we were so crowded.’

Katie did have a sister in New York – who was inconsolably arranging for a Requiem Mass when Katie walked through the door.

Besides the lie, Miss Gilnagh had also lived because of her beauty and the effect it had on winning sympathy and securing help. On two separate occasions, men acted to ensure that Katie made progress to the upper decks.

During the crossing she had occupied compartment Q161 on E deck, all the way aft on the starboard side, five decks down from the boats. Her cabin partners are believed to have been sisters Margaret and Kate Murphy, and Katie Mullen, all fellow County Longford travelers. All four were saved on boat No. 16, launched from the port side.

Relatives tell that a week before sailing, a gypsy woman called to the Gilnagh house and was being turned away by her father, Hughie when Katie demanded that her fortune be read. She was told she would soon be crossing water and there would be danger, but that she would come to no harm. The palm reading cost her sixpence.

Author Walter Lord, in "A Night to Remember," described how years later Gilnagh told of attending a party in steerage on the Sunday night of the disaster. At one point a rat scurried across the room. The boys gave chase and the girls squealed with excitement. Then the party was on again. Lord describes what happened for Katie after the berg impact:

Katherine Gilnagh, a pert colleen not quite sixteen [sic], heard a knock on the door. It was the young man who had caught her eye earlier that day playing the bagpipes on deck. He told her to get up – something was wrong with the ship …

At another barrier, a seaman held back Kathy Gilnagh, Kate Mullins and Kate Murphy. (On the Titanic all Irish girls seemed to be named Katherine.)

The report goes on to recount the story of how James Farrell got them through the gate and then continues:

Even then, Kathy Gilnagh’s troubles weren’t over. She took a wrong turn … lost her friends … found herself alone on the Second-Class promenade, with no idea how to reach the boats. The deck was deserted, except for a single man leaning against the rail, staring moodily into the night. He let her stand on his shoulders, and she managed to climb to the next deck up. When she finally reached the boat deck, No. 16 was just starting down. A man warned her off – there was no more room. ‘But I want to go with my sister!’ Kathy cried … ‘All right, get in,’ he sighed, and she slipped into the boat as it dropped to the sea – another Third-Class passenger safely away.

Gilnagh described James Farrell as her ‘guardian angel.’ He appears to have reached the upper decks, according to an Irish Independent report from May 15, 1912 about a letter written home by Katie concerning the ‘sad fate of fellow passengers from her district’:

(She) states that James Farrell of Clonee was very kind to her and another girl. As they were leaving the ill-fated vessel he gave her his cap to cover her head, and shouted ‘goodbye forever.’

Among the passengers who were saved from the ill-fated Titanic was a young lady named Miss Katie Gilnagh, of Killoe, County Longford, whose photo we reproduce. She has written to her parents in Longford giving a graphic narrative of her experience.

In her letter, she states that she and another girl named McCoy were the last two girls taken on the last boat, and a young man who had previously got into the boat was taken out of it. She further states that she was wearing a small shawl on her head which got blown off, when a person named Mr. James Farrell of Clonee, gave her his cap.

As they were being lowered, he shouted: ‘Goodbye for ever’ and that was the last she saw of him.

Katie may have been identified aboard Carpathia by fellow survivor Lawrence Beesley in his 1912 book "The Loss of the SS Titanic":

Among the Irish group was one girl of really remarkable beauty, black hair and deep violet eyes with long lashes, perfectly shaped features, and quite young, not more than eighteen or twenty; I think she lost no relatives on the Titanic.

Joyously welcomed by sister Molly in New York, Katie was photographed to reassure the family back home. She sat on a chair, smiling sweetly, as Molly stood protectively alongside.

Katie was born in Rhyne, County Longford, on October 13, 1894, appearing in the 1901 census as the second eldest child of parents Hugh (35) and Johanna (33) Gilnagh. Katie was aged just six and had an elder sister Mary (7), the selfsame Molly who was waiting anxiously in New York eleven years later. Four other children listed were Ellen (5), Thomas (3), Bridget (2) and one-year-old Elizabeth.

Katie was initially assisted by the Jewish Emigrant Society in New York and was aided to the tune of $100 by the American Red Cross, which described her as an Irish domestic servant, 17 years old. She later married John J. Manning from Roscommon. Heartbreak came to Katie with the death of her brother William in 1917, while her adoring sister Molly died in 1933. Katie also lost her husband before they could grow old together. He died in April 1955, not yet 60.

She went back to Ireland only once, in 1962, on the fiftieth anniversary of the sinking, and crossed the Atlantic for only the second time in her life – this time on an airliner. Her nephew Johnny Thompson recalls that a soothing voice which came over the intercom had the opposite effect on Katie: ‘Good afternoon, ladies and gentlemen, this is Captain Smith … ’ Horribly alarmed and distressed, Katie had to be brought to the cockpit to verify that it wasn’t the same Captain Smith who was in charge on her first Atlantic journey.

Earlier that year, as a 67-year-old grandmother, Katie had attended a 50th-anniversary memorial service at the Merchant Marine Institute in South Street, Manhattan. She told the Daily News of her memories of the sinking:

When we had gotten away from the ship I could see its lights but it was so dark I didn’t know what was happening. The man in the boat kept saying ‘I can see it sinking.’ Then I did see it sink. It went down bow first. The water crept up to the portholes, extinguishing the lights. When it went under it made a loud frightening noise. About eight hours later we were rescued by the liner Carpathia. My relatives thought I was dead, and when I got to my sister’s house they were preparing for my funeral.

She told her family that there had been epithets about the pope on steel girders about the Titanic, written by the ‘Orangemen’ among the Belfast builders, but made no claims about seeing them herself.

Unlike other Irish survivors, Kate was not haunted by memories of Titanic and talked freely to those interested. She believed that she was spared for a reason and was intent on enjoying the years given to her after 1912. However, she never set foot on a ship again. Even when seeing off friends and family she would only ever go as far as the gangway. She died on March 1, 1971, aged 76. Her death certificate gave a date of birth at odds with Irish records (October 29, 1895), making her 75 years old.