Chilling last words of a 19-year-old Cork man who died on the RMS Titanic after it struck an iceberg, en route to New York. 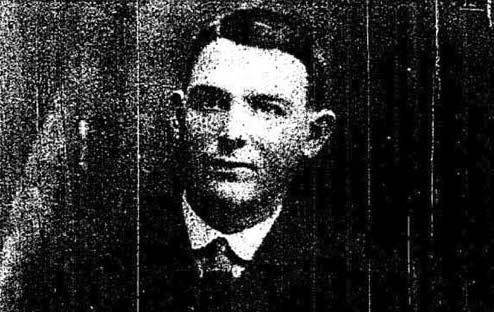 The chilling last words of 19-year-old Jeremiah Burke from Glanmire, Co. Cork, who died on the Titanic.

Chilling last words of a 19-year-old Cork man who died on the RMS Titanic after it struck an iceberg, en route to New York.

The chilling last words of 19-year-old Jeremiah Burke from Glanmire, County Cork, were slipped into a bottle not read until a year after his death on the Titanic. Using the bottle of holy water that his mother gave to him when she saw him off in Cobh, Burke used one of his very own shoelaces to tie it up and threw the letter overboard.

The letter simply reads: "From Titanic, goodbye all, Burke of Glanmire, Cork.”
Miraculously, the bottle made its way to shore only a few miles from his family's house. It was kept within the family until 2011, when his niece decided to donate it.

Speaking to the Belfast Telegraph at the time about the effects of the loss on her family Mary Woods explained that "Jeremiah's mother was at a removal several days later when a person came up to her and said 'I'm sorry for your loss.' It was only then that she found out what had happened. She died of a broken heart within the year.”

An illustration of the Titanic sinking.

Irish Aboard the Titanic - Jeremiah Burke

In 2011, the bottle and note went on display at the Cobh Heritage Centre, in County Cork, and Burke was one of the victims profiled in Senan Molony's 2012 book "The Irish Aboard Titanic," which was released for the centenary of the disaster.

"Jeremiah Burke [19] is the passenger fabled to have thrown a despairing message in a bottle from the decks of the sinking Titanic. Miraculously, the bottle washed up on the shoreline just a short distance from his home in Ireland just over a year later.

"The message contains an unclear date which could variously be 10, 12 or 13 April 1912. The Titanic struck the berg at 11.40 p.m. on 14 April. Interestingly, an article in the Irish News, published on 20 April 1912, observed that very few authentic messages from shipwrecks had ever come to safety and ‘very many … are cruel hoaxes.’

"Jeremiah’s grieving family believed the message found by a coachman on the shore at Dunkettle, close to their home, was authentic. The message reads: ‘From Titanic. Good Bye all. Burke of Glanmire, Cork.’ Kate Burke, his mother, recognized her son’s handwriting. She announced that the bottle was the same holy water bottle she had given to her boy on the day of his departure.

"Jeremiah Burke was only 19 and stood six feet two inches in his stockinged feet. He was the youngest of seven children who had all worked on the 70-acre family farm and stated on embarkation that he was an agricultural laborer.

"Two of his sisters had previously emigrated to the US and he was resolved to join them when a letter arrived from Charlestown with money for his passage. His cousin Nora Hegarty, from neighboring Killavarrig, decided to accompany him on the expedition to America.

"Jeremiah’s father William drove the cousins to Queenstown in his pony and trap. He reported seeing them making friends with another intending passenger, a piper identified as Eugene Daly. He survived, while both Jeremiah and Nora drowned."

On This Day: Handel's Messiah premiered in Fishamble Street, Dublin