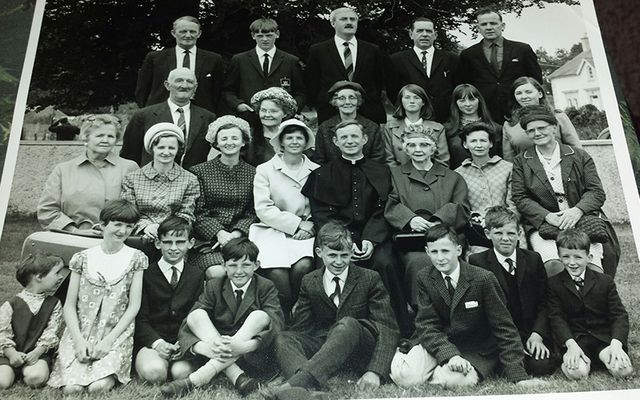 The family at Ballacolla. Jean Farrell

In 1845, during the Irish famine, the Loughman brothers left Ireland for America. Seventeen-year-old Edward Loughman remained behind. He married and reared his five children in post-famine Ireland. They lived in Queen’s County (now Laois). He was a blacksmith, living close to the village of Ballacolla, near the town of Abbeyleix.

In 1901, his eldest daughter, Cissie, ran away from home. She was only 21-years old. No letter was ever received from her. Her younger sisters, Molly and Julia (my grandmother), listened to gossip at the local dance. Some said that a match had been made which she didn’t want. Others said that a local lad, Owen Brennan, had also left around the same time as Cissie. Word was that they had been ‘walking out’ together. Whatever the truth – Cissie was gone from them and life went on in the busy forge.

Her brothers, Jim and Jack, were now blacksmiths. Jack was always in great demand locally. He could kill and cure a pig, as well as lay out a corpse. He made beer from hops, which was kept in a jar in the parlor. Jack had his own cures for many ailments. He had a mixture that looked like sour milk which was put on rashes with a feather, for erysipelas. In 1915 he was on the only Laois team that has ever won The All-Ireland Hurling final.

His brother Jim was a very skilled man. There was no part of a machine he could not design or make out of a piece of raw iron. He was intelligent and well read.

In 1911 Julia, aged twenty four, left home to serve her time to become a milliner. She married in 1924 and settled in Co. Tipperary, where her six children were reared.

Molly, went to The Munster Institute, in Cork, to train to be a dairy maid. One of her first lessons there was how to clean a hen’s perch. Molly married Pat Harte in 1929 and moved to the other side of Ballacolla village, to Anster.

Julie returned to her home place very often, accompanied by her six children. They all have the happiest of memories of these visits to Ballacolla.  One remembers Molly’s house, in the late 1930s.

“I was eight years old when I first saw where Molly went to live with her new husband. Unlike the slated two-storey house she had left – Pat Harte’s home was a single storey thatched cottage. You stepped into a small porch first, avoiding hens. You arrived into a very large kitchen. Here there was an open fire with a crane over it. Dinner would be cooking within large black pots hanging on this crane. A large dresser dominated this kitchen with tin buckets of water beside it.

"The long kitchen table was in front of the small window, which had a geranium in a pot on its ledge. There was one bedroom to the left of this kitchen and a parlour to the right. As evening fell Molly would go into this parlour and bring out an oil lamp and light this on the kitchen table. We jumped on hay and played chasing in the orchard edged with sweet pea, or chased the chickens. The lane up to the house had wonderful delights in its hedgerows, wild strawberries, crab apples, damsons, sloes and blackberries. These were all used to make assorted jams and jellies.”

Another of Julie’s daughters (my mother) wrote about visiting Jim and Jack, in the early 1940s. “We woke, as children, to the ring of the anvil. There was constant activity in the forge. Local farmers brought their black and grey working horses – these were vital for agriculture in those days. Stewards, from estates round about, would arrive with a string of horses and ponies. Occasionally a lord rode by to see how his stewards and horses were getting on. I remember Lord di Vesci, Lord Hamilton of Moyne and Lord Castletown being in the forge on different occasions. Our mother became a changed person during those holidays. She was like a young girl again flitting between the house and the forge, meeting old friends and being welcomed home by one and all.”

Julia’s six children had no cousins.  Jim and Jack, had never married and Molly, wasn’t ‘blessed’ with children. They have no memory of Cissie being mentioned at all. It was as if she had vanished off the planet.

Life went on. One dark winter’s evening, in 1942, during World War 2, Jim and Jack were working in the forge. A young tall American soldier walked in. “I think my mother came from here,” he told the astonished men. He was Cissie’s son, from Springfield in Massachusetts. He was with the American Forces, stationed in Wales and was on a 48 hour pass from there. Welcoming him warmly, his uncles drove him to Julia’s home in Tipperary. Her daughters were in their teens. They thought he was the most gorgeous man they had ever seen and insisted on bringing this ‘cousin’ to the local dance that night. He brought nylons for them, they all remember.

Contact was then made with Cissie’s daughter, Mary. Cissie had married Owen Brennan in Massachusetts, in 1904, shortly after they both arrived in America. (Cissie’s Baptismal name was Annie Loughman.)

Cissie’s daughter, Mary Brennan, wrote often to her Aunt Julia in the following years. Cissie was alive but unwell. In 1968 Julie’s son was ordained a priest. He said his first Mass in the Ballacolla. Mary Brennan, aged 58, came to Ireland for this momentous event. She returned to the birthplace of her mother. Sadly, Jim, Jack and Molly had died by this time. However, her Aunt Julia, aged 80, was alive and very well. Cissie’s daughter met her aunt, her cousins, as well as all her grandnieces and nephews.

I was there that day myself, aged sixteen. I remember well the great excitement surrounding the return of Cissie’s daughter from America, to her home place.

Contact was kept up between Mary Brennan and her aunt Julia afterwards. She wrote telling the sad news of the death of both her unmarried brothers. Mary, a school teacher, was also unmarried.

Julia’s eldest granddaughter (my sister, Sheelagh) went to America to visit Cissie’s daughter in the early 1970, to Springfield Massachusetts. She got a great welcome from Mary Brennan.

Even though many Loughmans left Ballacolla in 1845 and had settled in that part of America – Mary did not seem to have had any contact with them.

When she died, in 1982 a letter arrived, one morning, to her Irish relatives.

Mary Brennan left most of her money to Julia’s son who had become a priest. As Cissie had no grandchildren – we have no more American relatives!

Last year I drove through Ballacolla. I walked by the old house. Strangers live there now. I stood outside the gate and thought of the ghosts of my ancestors who must linger here still – Cissie, Jim, Molly, Jack and Julia—my grandmother.