In November 1846, a storm led to a shipwreck that unexpectedly offered a bit of salvation to a starving community in Co Kerry during the Great Famine. 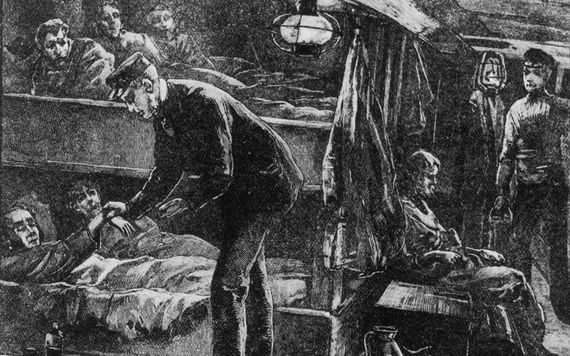 On Nov 20 1846 a shipwreck brought temporary solace to the community along the Kerry coast, during the Great Hunger. Getty

By late November 1846, Ireland was entering the second year of the Great Hunger.

Over three million of the island’s poorest people faced starvation. The West Coast, where poverty was endemic in the best of times, was the hardest hit. However, one such community on the Kerry coast received temporary salvation from the most unlikely of sources.

The winter of 1846 was bleak. Not only were the Irish people starving but the country’s grain merchants showed little sympathy. Despite the widespread hunger they continued to sell grain to the highest bidder, which meant the poor were unable to afford food.

Riots were common as large quantities of grain were moved to markets in the later months of the year. On November 20, 1846, the vessel the ‘Sea Lark’ left Tarbert, Co Kerry in the Shannon Estuary laden with seventy tons of flour, destined for the port of Tralee.

However, no sooner had the ship left port than a violent storm swept in from the Atlantic Ocean. Hundreds of houses were destroyed and scores of boats were caught up in the storm. In the aftermath, around 150 vessels were found floating off the west coast with their crews missing presumably having been swept overboard. Among their number was the ‘Sea Lark,’ which had left Tarbert with its hold full of flour.

Although the crew was lost, the hull of the ship and its valuable cargo of food survived intact. Eventually, the ‘Sea Lark’ drifted ashore at Ballybunion strand in Co Kerry, and word quickly spread through the countryside that a large shipment of flour had been shipwrecked on the coast.

By 9 am on November 21, 1846, one thousand people had gathered on the strand in the hope of getting some food. While the coastguard and police had arrived to protect the merchant’s flour, there was little they could do.

Starving and desperate, the crowd attacked the boat with axes and after three hours they had made six holes in the hull. Driven on by hunger, fights broke out as the first bags of flour emerged from the hull. In the following hours, the desperate people took what amounted to around 50 tons of flour from the ‘Sea Lark.’

On Sunday, November 22 an even larger crowd of 4,000 people gathered at Ballybunion strand to take the remaining flour. The police eventually intervened arresting people leaving the shore with what was considered stolen flour. Thirty others more were apprehended onboard the vessel. Heartless as these arrests were, the food already plundered from the vessel gave many on the North Kerry coast a much-needed lifeline as Black 47 approached.

*Fin Dwyer Is a historian, author, and creator of the Irish History podcast, which you can listen to here.