Irish Saint Malachy, the 12th-century bishop of Armagh, prophesied that there would be only one more pope after Benedict. 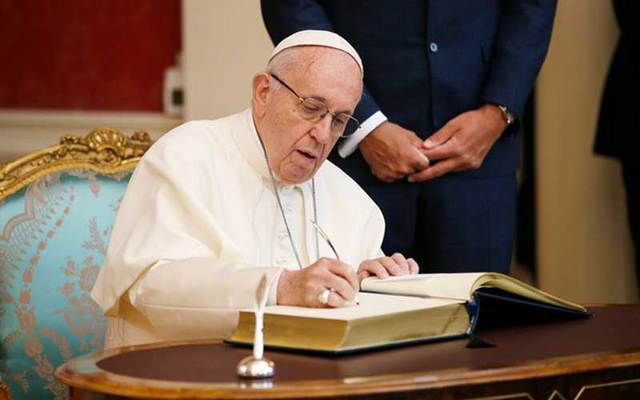 The prophecies of the Irish Saint Malachy (1094-1148), the 12th-century bishop of Armagh, have thrilled and dismayed readers for centuries.

In a series of 112 cryptic Latin phrases, the Irish saint "predicts" the Roman Catholic popes. He predicted there would be only one more pope after Benedict, and during his reign comes the end of the world. So Francis could be the last.

Saint Malachy's final prediction in full is: "In the final persecution of the Holy Roman Church there will reign Peter the Roman, who will feed his flock amid many tribulations, after which the seven-hilled city will be destroyed and the dreadful Judge will judge the people. The End.”

Pope Francis, who was born Jorge Mario Bergoglio, chose his papal name in honor of St. Francis of Assisi. One theory that seeks to confirm the Irish saint's final prophecy is that Saint Francis's father's name was Pietro, or Peter.

In 1139, then Archbishop Malachy went to Rome from Ireland to give an account of his affairs. While there, he received a strange vision about the future that included the name of every pope, 112 in all from his time, who would rule until the end of time. We are now at the last prophecy.

St. Malachy gave an account of his visions to Pope Innocent II, but the document remained unknown in the Roman Archives until its discovery in 1590.

His predictions are taken very seriously. As one report states: "In 1958, before the Conclave that would elect Pope John XXIII, Cardinal Spellman of New York hired a boat, filled it with sheep and sailed up and down the Tiber River, to show that he was 'pastor et nautor,' the motto attributed to the next Pope in the prophecies."

As for the prophecy concerning the 111th pope, Pope Benedict, the prophecy says of him, "Gloria Olivae," which means "the glory of the Olive." The Order of Saint Benedict is also known as the Olivetans, which many claims make Malachy's prophecies correct. The next and final pope then should be "Peter Romanus."

Many of the prophecies are spot on. For example, the one about Pope Urban VIII is Lilium et Rosa (the lily and the rose). He was a native of Florence and the arms of Florence feature a fleur-de-lis.

Pope John Paul II (Karol Wojtyla) is De labore Solis meaning "of the eclipse of the sun." Wojtyla was born on May 18, 1920, during a solar eclipse.

Peregrinus apostolicus (pilgrim pope), which designates Pius VI, appears to be verified by his many journeys to new lands.

So will Pope Francis be the last pope? The Irish seer of the 12th century has said it will be so. Time will tell.