The abandoned ghost town of Bantry could be the setting for many an Irish horror story. 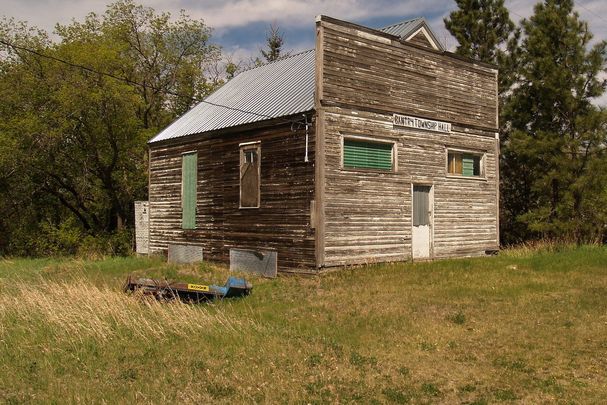 One of the abandoned buildings in the Irish ghost town of Bantry, North Dakota Andrew Filler/Creative Commons

It sets the scene for many horror movies - an abandoned, run-down, old town with buildings shuttered up and all of the residents have fled to safer pastures. A place appearing empty until some poor group of friends with a broken-down car discovers the real reason why the town has been abandoned and so begins the terror and murder.

Well, we can't say that this is exactly true of the town of Bantry in North Dakota, but we certainly wouldn't like to be left wandering alone there at night!

The small town called Bantry sits in the northern part of McHenry County, North Dakota, which was founded in 1873 and named for James McHenry, an early settler in the area and the son of an Irish immigrant.

Bantry was founded in 1905, by all accounts by Irish immigrants, who named it after Bantry, Co. Cork.

The Bantry in Ireland is a seaside town on Ireland’s southwest coast by Bantry Bay. Its name in Irish, Beanntraí, translates to "(place of) Beann's people." Today its population is a little over 3,000

Bantry, North Dakota is a different story. According to Ghosts of North Dakota, a blog that explores the state’s many ghost towns – old pioneer settlements whose populations dwindled over the years until there was barely anything left – Bantry is today a ghost town, or very close to it.

As they explain, “According to North Dakota Place Names by Douglas A. Wick, Bantry peaked at a population of 315 in 1920.”

Ghosts of North Dakota paid a visit to Bantry and photographed its abandoned, shuttered buildings, including the old bank and church.

But it seems that Bantry is still very much alive in people’s memories. The website’s comment section is full of messages from people who grew up in Bantry or had relatives who lived there, recalling the old days and the local gathering spot called Frank’s Bar.

Have you visited Bantry, North Dakota, or a similar ghost town? What was your experience like? Let us know in the comments section below.