The Virtual Record Treasury of Ireland allows people to "take a step back in time" and explore a virtual recreation of the Public Record Office, which was destroyed during the shelling of the Four Courts on June 30, 1922. 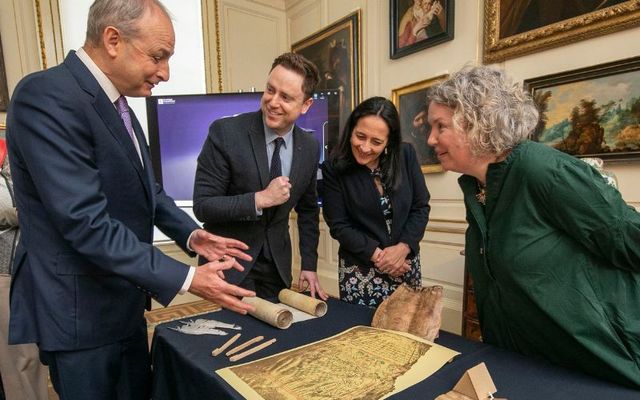 A groundbreaking project has brought seven centuries of public records back to life 100 years after they were destroyed during the shelling of the Four Courts at the beginning of the Irish Civil War.

The Virtual Record Treasury of Ireland allows people to "take a step back in time" and explore a virtual recreation of the Public Record Office, which was destroyed during the shelling of the Four Courts on June 30, 1922. Users will be able to "step inside" the six-story Victorian Public Record Office via an immersive 3-D experience. 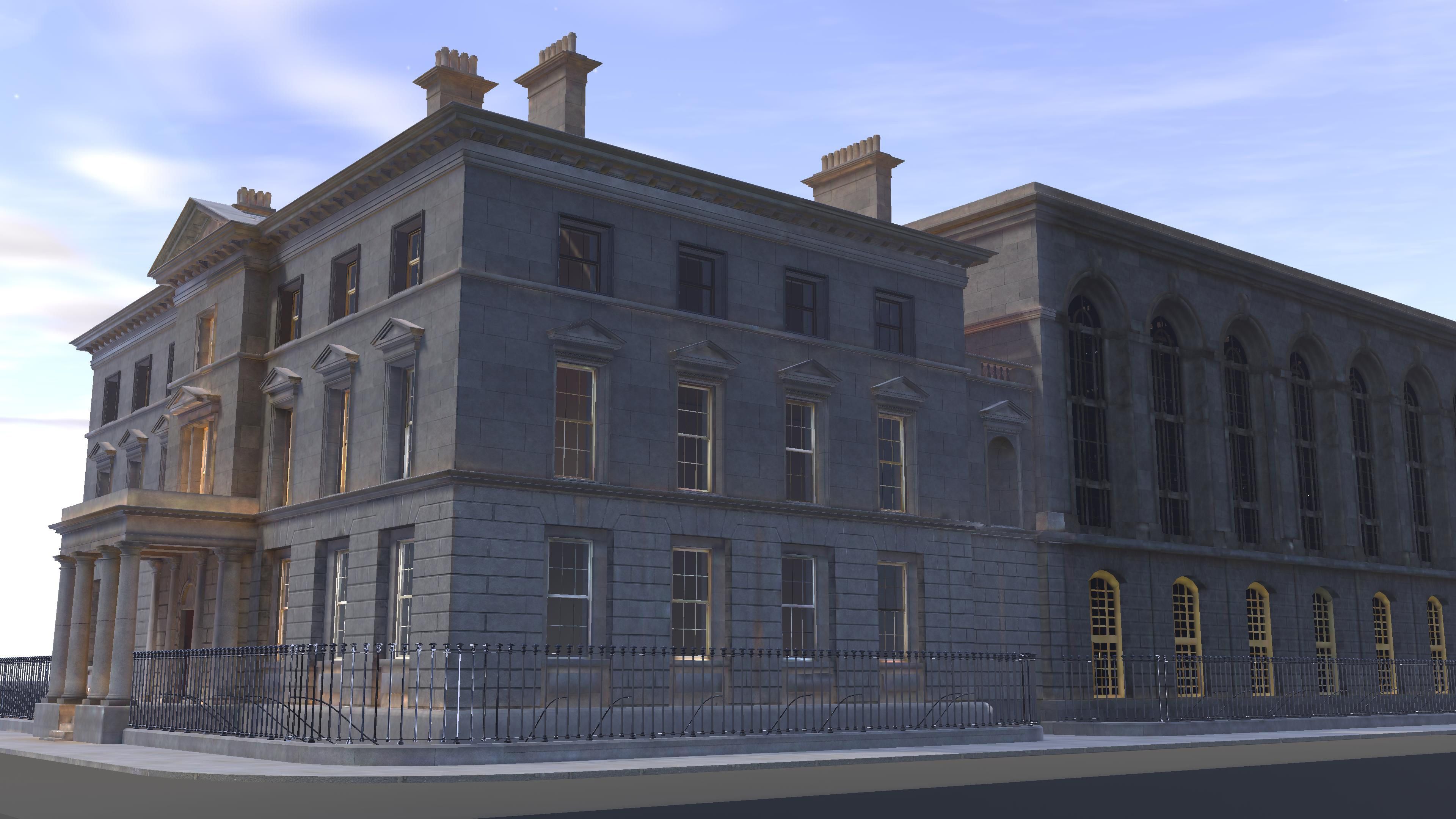 The virtual treasury ranges between 1174 and 1922, allowing users to access 150,000 online records, ranging from single sheets to entire volumes.

The online treasury, which was launched as part of Ireland's "Decade of Centenaries", also includes 50 million words of text and more than 6,000 maps, offering access to fascinating records, such as Ireland's first census from 1766.

The 1766 Religious Census of Ireland is one of three "Gold Seam" collections in the virtual treasury, where up to 80% of lost material has been retrieved.

Also almost totally restored were the Cromwellian Surveys of the Seventeenth Century, which offer unprecedented access to Irish land ownership records during Oliver Cromwell's invasion of Ireland, and the 13th-century Medival Exchequer, which provides a treasure trove of information about Irish society, economics, and politics in the centuries after Ireland was conquered by England.

The Virtual Record Treasury of Ireland is a growing treasury of duplicate documents found in 70 archives in Ireland and around the world, helping to recover documents that appeared lost forever following the destruction of the Public Record Office 100 years ago.

Indeed, Herbert Wood, the Deputy Keeper of the Public Record Office at the time of the shelling, noted that "the records of centuries have passed into oblivion" when he returned to the Four Courts in the days after the shelling to assess the damage.

Wood had published "A Guide to the Records Deposited in the Public Record Office of Ireland" three years before the outbreak of the Civil War, documenting all of the records that would later be destroyed.

The book proved to be an important starting point for researchers involved with the Virtual Record Treasury as they embarked on an ambitious project to track down copies of the records destroyed 100 years ago.

In a statement ahead of the launch, the Taoiseach described the project as an "enduring and meaningful legacy for our Decade of Centenaries".

"It belongs to the people of Ireland, democratizing access to our rich archival heritage and making our shared history accessible for everyone," Micheál Martin said.

"It is an invaluable historical resource for people of all traditions across the island and for everyone of Irish heritage around the world. It is an immense achievement and testament to the commitment and dedication of the Beyond 2022 project team."

Tourism Minister Catherine Martin added that the project would allow people to "engage with history", allowing for new insights and perspectives.

"What was previously unexplored, unintelligible, or inaccessible to us is now revealed, allowing for new insights and perspectives. It is an inspiring and enduring legacy for our Decade of Centenaries," Catherine Martin said in a statement ahead of Monday's launch.

Historians at Trinity College Dublin and computer scientists at the ADAPT center have teamed up to develop the online recreation of the Public Record Office, working in partnership with the National Archives of Ireland, National Archives (UK), Public Record Office of Northern Ireland, Irish Manuscripts Commission and the Library of Trinity College Dublin.

Dr. Peter Crooks, an Associate Professor in Medieval History at Trinity College who also serves as the "Beyond 2022" Programme Director, said the online treasury would allow users to see the Public Record Office just as it was on the eve of its destruction.

"The online user can step inside the virtual space, where they will find out what happened 100 years ago," Crooks told RTÉ.

"They can then step inside the reading room, just as it was on the eve of the fire. They can also step inside the Record Treasury, where they will get a sense of the scale of the collection that was lost. But from there, you have to step further and start your own exploration into the past." 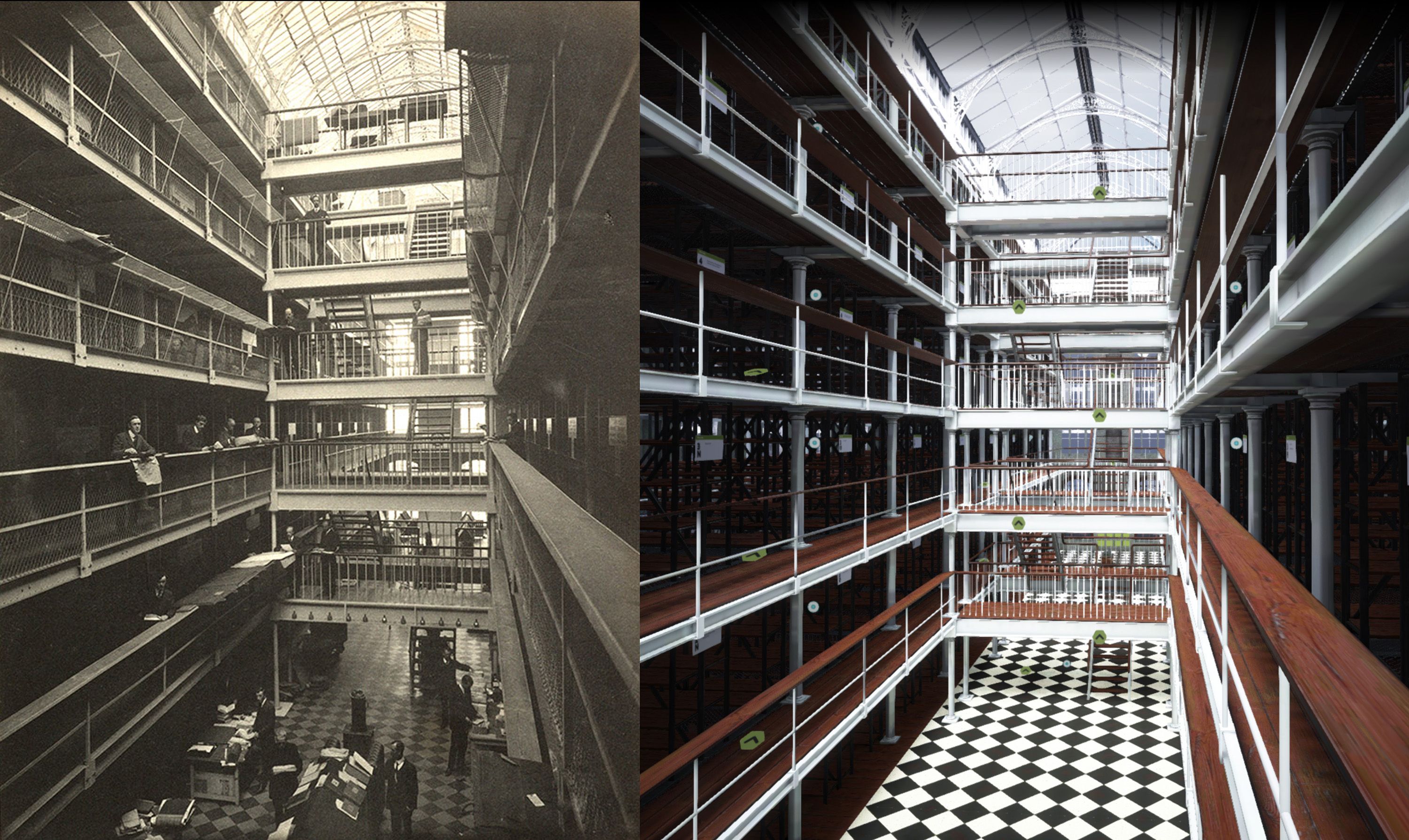 Lost and found. The interior of the Record Treasury before its destruction in 1922, open for (virtual) visitors for the first time in a century. Photo: National archives of Ireland and Virtual Record Treasury

Crooks said in a statement that the loss of the archive in 1922 "hampered our understanding of Ireland's past", adding that it was one of the "great archives in Europe".

"Thanks to the meticulous record-keeping of generations of archivists, historians, copyists, genealogists and clerks, thousands of duplicates and transcripts of Ireland’s records, scattered across the world, have been preserved, Crooks said in a statement.

"Record by record, shelf by shelf, historians, archivists, and computer scientists are bringing Ireland’s destroyed national treasure back to life."

Zoe Reid, Keeper of the National Archives, told RTÉ that there is a misconception that all documents were lost after the fire.

"Things were salvaged by staff in the weeks after the fire and scraps of parchments and documents were kept and stored carefully.

"It's been really incredible to conserve these documents, along with the other source materials that the historians have been able to find around the world.