3-D virtual reality reconstruction of national archive will allow public to walk through the destroyed building and explore the lost records. 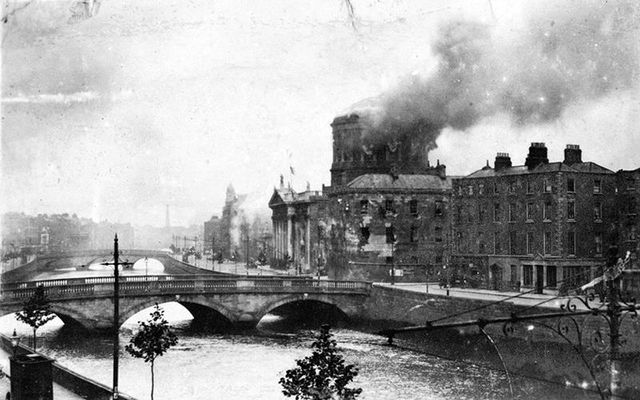 3-D virtual reality reconstruction of Irish national archive will allow public to walk through the destroyed building and explore the lost records.

Trinity College have launched ground-breaking project to digitally recreate the Four Courts Public Record Office building and it’s seven centuries of records in a historic 3-D virtual reality reconstruction. The building and contents, on the quays of Dublin’s River Liffey were destroyed by fire at Dublin’s Four Courts at the outset of the Irish Civil War.

Resurrecting and compiling these millions of recovered historical and genealogical facts will transform how we understand Ireland’s past.

The project, launched on Tuesday, in Trinity College Dubin’s Library, Long Room, has the potential to transform how we understand Ireland's past and will be of great interest to the Irish diaspora and anyone tracing their Irish roots. It is estimated that up to 70 million people around the world claim Irish ancestry and heritage.

When Dublin’s Four Courts went up in flames on June 30th, 1922, seven centuries of Ireland’s historical and genealogical records, stored in a magnificent six-story Victorian archive building known as the Record Treasury, were lost. In one afternoon, hundreds of thousands of English Government records concerning Ireland, dating back to the 13th century, were destroyed - seemingly forever.

Massive Irish genealogy news! The lost seven centuries of Irish records, burnt in the 1922 Four Courts fire, will soon be digitized and available online through a unique virtual reality experience.

Posted by IrishCentral.com on Thursday, February 8, 2018

As well as documenting the growth of the state in Ireland across many centuries the archive’s collections touched on almost every aspect of life in Ireland, including births, marriages , and deaths, wills, maps, parish registers and town records from across the island. For generations, the loss of these precious historical documents has hampered the study of Ireland’s past, limiting our understanding of family, local and national history as well as Ireland's connected history with the wider world.

New technology, historical research and careful archival practice mean that these losses are not irrecoverable.

Today historians and computer scientists at Trinity have unveiled plans to bring Ireland's Public Record Office back to life by creating a 3D virtual reality reconstruction of the destroyed building and refilling its shelves with fully-searchable surviving documents and copies of the lost records, which have been identified by the team in archives and libraries around the world.

The project will bring millions of lost historical and genealogical facts to a global audience and will allow historical research to reach back four centuries earlier than most currently available genealogical resources. 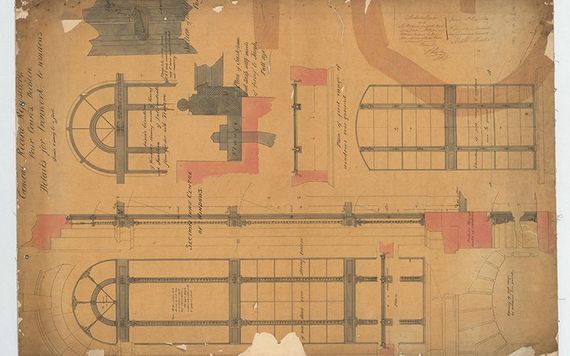 Detailed records of the plans of the building supplied by the Office of Public Works.

The project, ‘Beyond 2022: Ireland’s Virtual Record Treasury’ is by the School of Histories and Humanities and the ADAPT Centre for Digital Content Technology in the School of Computer Science and Statistics, the project is a collaboration with Trinity’s four archival partners: The National Archives of Ireland, The National Archives (UK), The Public Record Office of Northern Ireland and The Irish Manuscripts Commission. The project is funded by the Irish Research Council.

The completed project will be made available on the centenary of the Four Courts blaze in 2022. A project website www.beyond2022.ie will be made live and demonstrates the scope of the project and technology involved. This includes an animation of the 3D model being developed which allows the public to experience the magnificent Victorian archive as it was on the eve of its destruction.

In December 2018, this website will be enhanced to make the full catalogue of the record treasury available to the public for the first time since 1922. At the launch event a virtual reality showcase was demonstrated, which allowed users have a fully immersive, three-dimensional experience of moving through the destroyed building, using VR headsets. 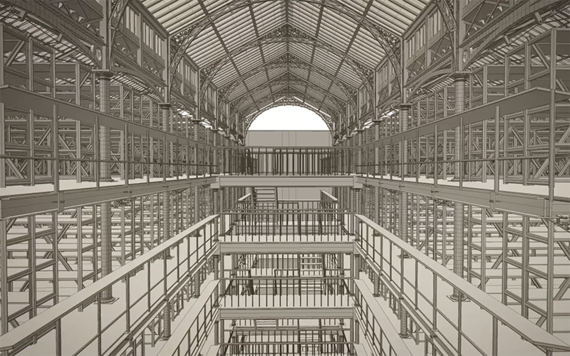 A virtual reconstruction of how the inside of the building was formed.

Transforming how we deal with lost histories

Commenting on the significance of the project, Dr Patrick Prendergast, Provost of Trinity, said: “Ireland's Virtual Record Treasury will be a public and academic resource with global reach and impact. This international, collaborative project makes a significant contribution to the national commemorative effort by reuniting collections destroyed by war. It forms part of our strategic research theme ‘Making Ireland’ — a transformative collaboration in Irish studies.

“By reconstructing a lost treasure, Trinity is seeking to create a lasting and meaningful legacy and an invaluable resource for researchers and educators at all levels which will continue to grow beyond 2022. By moving beyond the divisive legacy of the period, the project will also reopen Ireland’s deeper past to the general public at home and in the wider diaspora.” 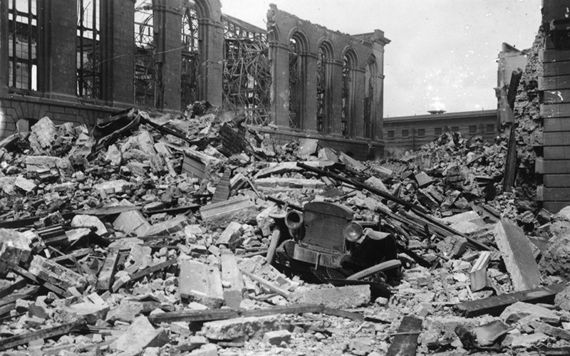 What remained of the building after the 1922 fire.

Through detailed historical detective work, the project team is working to recover the information contained in the destroyed archive by identifying and digitizing surviving or substitute materials held by archives and libraries around the world. These materials include records that survived the blaze, records that were damaged but not completely destroyed, duplicates of original records now held in partner archives, as well as facsimile images, antiquarian transcripts and summaries of the records made before 1922.

Dr Peter Crooks, Principal Investigator of the project and Assistant Professor, School of Histories and Humanities, commented on the potential impact of the project “One of the most ambitious elements of our work is the identification of ‘Gold Seams’ of substitute sources. These are hugely significant substitute archival collections held in libraries and archives scattered around the world that can help us recover whole series of records destroyed in 1922. 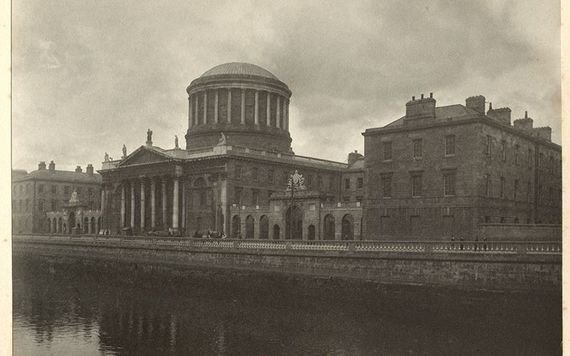 The Four Courts before the fire in 1922.

“By reconstructing these records, which collectively comprise millions of historical and genealogical facts, we have the potential to transform the evidence base on which Irish history is written. Because the archival collections date from such an early period of history, the reconstruction effort will allow anyone with an interest in researching their families or localities to engage in deep history, reaching back almost half a millennium earlier than most readily available genealogical resources.”

When complete, users of Ireland’s Virtual Record Treasury will experience a fully immersive virtual tour of the digitally reconstructed Public Record Office. They will be able to enter a 3D virtual reality reconstruction of the destroyed building and request a historical document in the beautiful Victorian Reading Room. Users will then be able to enter the destroyed Record Treasury itself where the records were held, and move through its 100,000sq ft of archive shelving to the very spot where the record was once stored in order to access any surviving fragments or substitute copies in digital form. The record on the shelf will be a launch pad to substitute records stored in libraries and archives around the globe. 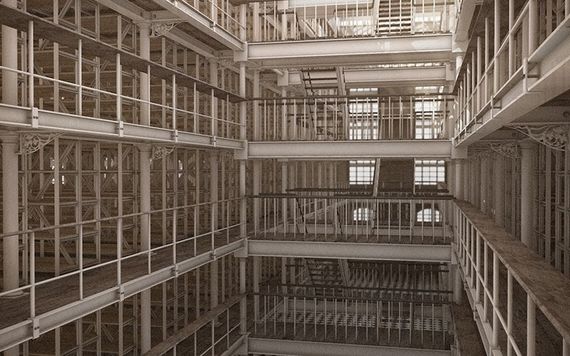 A computer rendering of the interior of the building.

Dr Séamus Lawless, Assistant Professor, ADAPT Centre and School of Computer Science, commented on the scientific and technological aspects of the project: “This is a true digital humanities project, with exciting research in both computer science and history. The development of a fully immersive recreation of the archive allows us to blend the physical with the digital, and study how people search for information when using the archive. It will also develop approaches to allow people to seamlessly search for information within the virtual archive, and in archives across the globe that hold related or substitute content. Beyond 2022 has the potential to have significant impact on how people search for, interact with and consume information in virtual reality experiences.”

Have you been waiting for this moment? What would you love to find inside this treasure trove of Irish history records? Let us know in the comments section below.