A virtual reconstruction of Dublin's Four Courts and its archives is set to be unveiled in June. 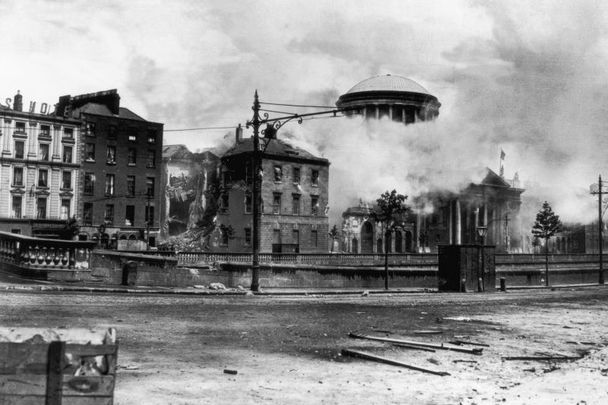 1922: The Four Courts, the Dublin headquarters of the anti-Treaty Republicans, is shelled by Free State forces during the Irish Civil War. Getty Images

Up until now, it was widely held that the bombing and destruction of the Four Courts in Dublin in June 1922 had destroyed generations of documents about Irish history forever.

But now, seven centuries of missing Irish historical documents will be on display in Dublin starting on June 27.

The Guardian newspaper reports, “Digital wizardry and academic sleuthing have helped recreate a cultural treasure severely damaged in the conflict in 1922.”

To say this is extraordinary news would be to play the development down. It is downright incredible.

With hundreds of thousands of new historical documents recreated, one major question springs to mind – will we find out who the paid Irish informers were who devastated such organizations as the United Irishmen, the Fenians, and the 1916 Easter Rising army? The British, it seems, recorded everything and may well have left evidence of their dealings with informers.

The burning of the Four Courts was a national disaster. Imagine the National Archives Museum in Washington with its founding father's artifacts being destroyed and you get a sense of the dreadful damage.

In the Four Courts were documents from the Norman invasion of 1169 up to 1922 contained in a six-story building beside the River Liffey. The Republicans who wanted to fight on and ignored the treaty were holed up there amid the records.

Ironically, it was Michael Collins, under extraordinary pressure from Winston Churchill, the British secretary of state for war, who gave the orders to fire. An exploding shell fell on the Republicans’ arms dump, and the subsequent firestorm destroyed the Four Courts.

“At one stroke, the records of centuries have passed into oblivion,” said Herbert Wood, deputy keeper of the public records.

As The Guardian notes, “Now, on the eve of the disaster’s centenary, a virtual reconstruction of the building and its archives is to be unveiled. Historians, archivists and computer scientists have spent five years piecing together much of what had been thought lost forever.”

“When we began the project, the story was that everything had been lost. But it turns out we have been able to recover hundreds of thousands of documents,” said Peter Crooks, director of Beyond 2022: Virtual Record Treasury of Ireland.

“We could not have known the scale of the materials that were out there.”

The British Imperial War Museum records in Kew Gardens near London was especially helpful. It had kept meticulous records of Ireland for centuries.

On June 27 of this year, the giant digital archive will be made available to the public courtesy of the Irish ministry for culture, dogged researchers from Trinity College Dublin, and massive cooperation from similar archives in Britain, the U.S., Australia, and continental Europe. (In the 19th century, many American museums snatched up artifacts and manuscripts from Irish and other sellers.)

In a sheer stroke of luck, it turned out the Tudor monarchs (1509-1603) did not trust the Irish and insisted every document be duplicated in London.

But in a stroke of bad luck, there is no sign yet of the pre-Famine census which would settle how many lived in Ireland before the Gorta Mor.

“This is the great revelation – once you start asking, ‘What do you have?’ it can be overwhelming,” said Crooks.

Ciaran Wallace of Trinity College believes they have only scratched the surface. But what a start to a brilliant undertaking!