Irish immigrants and their offspring have dug as deep as skyscrapers are high. 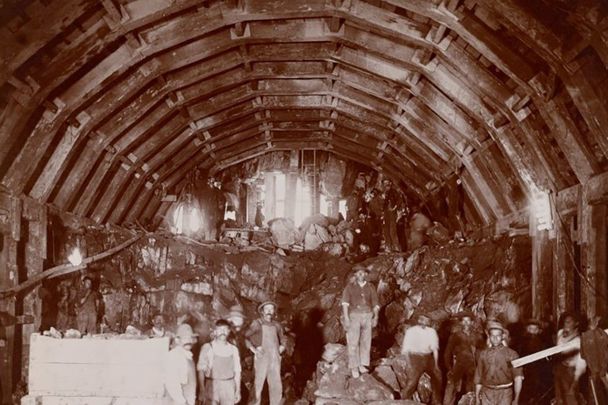 Irish immigrants among those building the subways. NYC Public Library

The Sandhogs of New York - out of sight and underground, the many Irish immigrants who dug as deep under the Big Apple as skyscrapers are high.

From laying the foundations of the Brooklyn Bridge, through to building The Lincoln Tunnel, Queens Midtown Tunnel, Brooklyn Battery Tunnel, the entire subway network, and the tunnels that ferry the city's water from upstate, the Sandhogs are integral to the survival of one of the world's greatest cities.

Few New Yorkers know these tunnel workers exist: out of sight, out of mind. Fewer know how integral Irish workers are to the city's underground network.

Irish immigrants and their offspring have dug as deep as skyscrapers are high.

"The Sandhogs" is a documentary by producer Pavel Barter, funded by the Broadcasting Authority of Ireland with the Television License Fee.

In this documentary, Pavel Barter takes a journey through generations of this father-son union. He ventures into Local Union 147 (Sandhog base in the Bronx), and deep into the tunnels of New York, to experience the fruits of Sandhog labor and the dangers they face on a daily basis.

The following are a selection of quotes from the documentary:

"It was the kind of job where only the hungriest would go anywhere near it. The Irish kind of made it their own. The Irish seemed to have an obsession with being the hardest workers, doing the most dangerous jobs. It was like a fierce competition between gangs."

"We used to have a rule of thumb: a man a mile. For every mile of tunnel, you'd end up with a dead tunnel-man."

“If one Sandhog gets hurt, everyone looks after him. The Irish are very good out here for each other."

"It's the closest you'll ever come to working on a pirate ship in modern America."

The Sandhogs can also be listened to online at www.newstalk.com

Podcast available at www.newstalk.com/documentaryonnewstalk after the broadcast.