It wasn’t just African Americans in the Deep South who had reasons to fear the KKK movement. 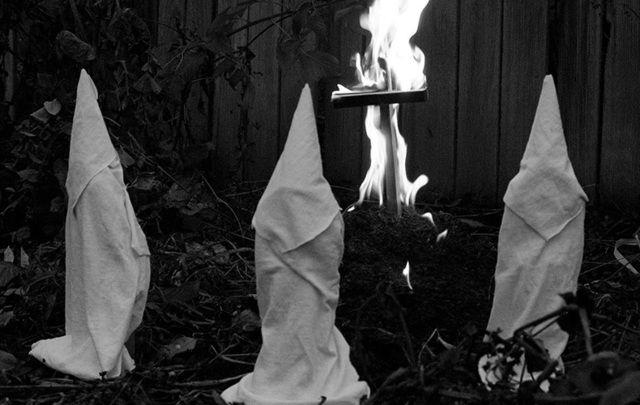 It wasn’t just African Americans in the Deep South who had reasons to fear the Ku Klux Klan. iStock

Father James Coyle was a heroic Irish priest murdered by Edwin Stephenson - a member of the Ku Klux Klan - mere hours after he had married Stephenson’s daughter to a former Puerto Rican employee of his.

Born in a small village near Athlone, Co. Roscommon, Fr Coyle had been ordained in Rome in 1896 after which he moved to America’s Deep South to serve as a parish priest. The Catholic population in Alabama had swelled dramatically towards the tail end of the 19th century, as workers flocked south to work in the flourishing industries that had sprung up around Birmingham.

But as the Catholic population had increased in Birmingham, Alabama, so had Protestant hostility to their new neighbors. Only a few decades after the end of the Civil War, the south was still riven with prejudice and sectarianism was deeply ingrained.

A number of states were so convulsed by the anti-Catholic feeling that they passed “convent inspection laws” which gave the police the power to conduct warrantless inspections of Catholic churches, schools or hospitals. The thinking was such places would be used to keep kidnapped Protestant women and store weapons that might be used in an armed insurrection.

In such a polarized society, Fr Coyle definitely stood up for his parishioners; plots were discovered against his life and plans were uncovered to raze his Church to the ground.

According to Judge William Pryor, the former Alabama Attorney General who has written extensively of the priest, “I think he was a scholarly guy. He was a prolific writer, especially of poetry. This was a sophisticated man.”

The priest responded to newspaper attacks on his religion with his own letters lambasting the ignorant suppositions of bigots. Becoming the most prominent defender of the Catholic faith in this area made the courageous priest a target for anonymous death threats.

According to local historian and blogger Courtney Haden "Coyle could not have imagined that his most imminent threat was from a fellow clergyman. Edwin Stephenson was an ordained Methodist deacon who presented himself as a full-fledged minister for his primary occupation of marrying couples at the Jefferson County Courthouse (which in 1921 was on the same Third Avenue North block as St. Paul’s). He was also a member of Robert E. Lee Klavern No. 1, the first Alabama chapter of the new Ku Klux Klan.

"Stephenson and his wife, Mary, had a free-spirited daughter named Ruth who chafed at the strictures of the Stephenson household. Living only a block away from St. Paul’s, she seemed fascinated by the trappings of Catholicism, despite her father’s diatribes against the religion, and once, at the age of 12, had even been caught conversing with Father Coyle himself on the porch of the rectory. Her punishment for fraternizing with the man Stephenson called “one of humanity’s biggest enemies” was, in her later words, “severe.”

Ruth turned 18 on August 29, 1920. Though she still lived with her parents, she started secretly attending classes on the Catholic faith, and the next spring she was baptized as a Catholic. When Edwin Stephenson discovered this betrayal, he threatened to kill his daughter. She decided to stay with the Benders, a Catholic couple living on the Southside until things cooled down at home, but her father went to the Birmingham police chief — a fellow Klansman — to report that Ruth had been kidnapped by Catholics. As her legal guardian, Stephenson was empowered to take her back. After police supervised her exit from the Benders’ house, he took his daughter home and beat her with a leather razor strap. Her mother reportedly stuffed a rag in her mouth to stifle her screams.

When she turned 21, Ruth would be legally emancipated from her parents, but under Alabama law, were she to wed before then, she would be freed as well. Enter Pedro Gussman, a wallpaper hanger from Puerto Rico whom Ruth first met when she was 13 and he was boarding with her family while working on their house. Though 24 years older than the girl (he is said not to have looked it), he proposed to her then. Nothing came of it at that time, but they stayed in touch furtively throughout the next few years. In July 1921, Ruth sent a letter to Pedro accepting at last his proposal of marriage.

Perhaps anticipating her parents’ disapproval, they planned a secret ceremony. Since they both worked downtown, they would sneak away during their lunch hour, catch a streetcar to Bessemer, get a license at the courthouse there and walk down to a nearby Catholic church to be wed.

August 11, 1921, was to be their wedding day. Pedro and Ruth made it to Bessemer undetected and secured a license, but there was no priest there available to marry them.  They decided to return to Birmingham, to see if Father Coyle would marry them at St. Paul’s. It was a dangerous chance to take since Edwin Stephenson worked nearby at the courthouse as a “marrying parson.” They took it anyway.

After what must have been an agonizing interval for the couple, waiting on the priest to return from church business in Pratt City, Father Coyle arrived at the church. He checked the license, then enlisted his sister and another priest to be witnesses as he married Pedro and Ruth before the grand altar at the front of the church. After the ceremony, according to a report days later in the Birmingham Age-Herald, Father Coyle told Ruth, “The right thing for you to do is to notify your parents that you are married at once.”

Edwin Stephenson was even at that moment on her trail. He had gotten word that she had not come back to work after lunch that day, whereupon he set out walking in the blistering summer heat. He first walked to the police department, then to the sheriff’s department to report his daughter missing and to demand an official search for her. Afterward, he was seen to walk aimlessly up and down Third Avenue North.

Meanwhile, Ruth had called her home. Her parents were not there, but a cousin was, and he took Ruth’s fateful message: “I am married to a Catholic boy.”

It was Father Coyle’s custom to take his ease after supper in a porch swing in front of the rectory. At about 6:30 on the evening of Aug. 11, the tall Irishman was in his favored spot reading the breviary as another tall man, dressed in ministerial black, walked up the steps of the porch, pulled a pistol from his pocket and fired three shots at the priest. The assassin, Edwin Stephenson, then walked unhurriedly to the courthouse and surrendered to police, saying, “It’s all right, gentlemen, I know what I’m doing,” and asking to be locked up."

Despite the brutality of Fr Coyle’s murder, many Alabamans sympathized with Stephenson and it took weeks for the state to indict him. In response, the Klan hired and paid for his lawyer - future US Senator and Supreme Court Justice Hugo Black.

Stephenson pleaded “not guilty and not guilty by insanity”, arguing first that he had acted out of self-defence and secondly that the news of his daughter’s marriage to a Catholic had driven him insane.

The weeklong trial was a national sensation and reporters from across the United States flocked to Alabama to hear the case. Alarmingly, both the judge and jury foreman were Klan members and he was acquitted by a single vote.

The murder of Fr Coyle has come to be seen as the zenith of anti-Catholic sectarianism in the American South. Reflecting on the killing some twenty years later in Catholic Weekly a former parishioner, Helen McGough, mused that, “the death of Father Coyle was the climax of the anti-Catholic feeling in Alabama. After the trial there followed such revulsion of feeling among the right-minded who before had been bogged down in blindness and indifference that slowly and almost unnoticeably the Ku Klux Klan and their ilk began to lose favor among the people.”

To this day, Fr Coyle remains a hero and well-remembered martyr amongst the Catholic community in Alabama. Nearly a century after his murder the Father James E. Coyle Memorial Project remains active in the hope that “the sharing of the life and death of this holy man may promote greater understanding, reconciliation, and peace among all of God's children.”

Read more: When the Klan and Irish Catholics clashed at the 1924 brokered Democratic convention