Philly’s oldest continuously operating tavern and one of the oldest in the United States, owned by only two families, and opened when Lincoln was in power. 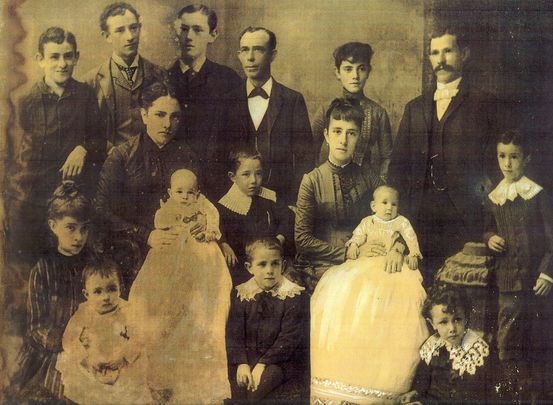 The original family owners of the McGillin’s Olde Ale House, originally from Tyrone.

McGillin’s Olde Ale House, Philly’s oldest continuously operating tavern
and one of the oldest in the United States, owned by only two families and opened when Lincoln was in power.

McGillin’s Olde Ale House is the oldest continuously operating tavern in Philadelphia and one of the oldest in the country. It opened in 1860, the year Abe Lincoln was elected president of the United States. The historic tavern’s long, storied history is filled with celebrities, ghosts and a tale of survival even through Prohibition.

Over the years, McGillin’s has only been owned by only two families: the McGillin’s, who raised their 13 children upstairs, and the current owners, Spaniak/Mullins family, who have passed it down through three generations.

Read more: Why Irish bars in New York City are something special

“McGillin’s has become just like the fictional Cheers,” said Chris Mullins, co-owner of McGillin’s with his wife, Mary Ellen, and son, Christopher Mullins, Jr. “the place people go for its welcoming atmosphere, good food at a reasonable price, camaraderie and, of course, large selection of local and regional beers on tap.”

Though it sounds simple, the bar doesn’t rest on its laurels. After more than a century and a half, McGillin’s continues to receive accolades, including being named one of the 8 most authentic Irish pubs in the U.S. by Fodor’s, to The Daily Meal’s list of 150 Best Bars in America and it was even a clue in a New York Times crossword puzzle.

The tavern that opened around the time the Liberty Bell cracked and long before anyone ever tasted a cheesesteak. The tavern was opened by two Irish immigrants, William “Pa” McGillin and his wife, Catherine “Ma” McGillins.

Pa was originally from County Tyrone and records are murky on Ma, but she is believed to also be from Northern Ireland, though the town or county has been lost to history. What we do know is that they ran the bar, raised their 13 children upstairs, and used rooms above the bar to house Irish immigrants, who often tended bar. The tavern was originally called The Bell in Hand, but the laborers who frequented the place just called it McGillin’s and the nickname stuck.

After Pa died, Ma took over running the bar/restaurant. No push-over, Ma had a list of troublemakers who weren’t allowed into McGillin’s and ensured the bar survived Prohibition by serving “tea” upstairs and giving away free potatoes. Ma ran the bar until her death in 1937 at the age of 90.

The McGillin’s daughter, Mercedes, who grew up above the tavern, sold it to brothers and experienced barkeeps, Henry Spaniak and Joe Shepaniak in 1958. (That’s not a mistake, the brothers actually spelled their name differently.)

Keeping it in the family, Henry’s daughter, Mary Ellen Spaniak Mullins and her Irish husband, Chris Mullins have run the restaurant since 1993. And, the legacy of hospitality continues with Mary Ellen and Chris’ son, Christopher Mullins, Jr., representing the family’s third generation to manage the historic tavern.

Today, the bar still appeals to everyone - families who come to celebrate the holidays when the bar has over-the-top Christmas decorations, 21-year-olds taking their first legal drinks, their parents who stop by for lunch or after work - politicians including two presidential candidates, professional athletes, white-collar and blue-collar workers and a 92-year-old who celebrated 75 birthdays at the tavern.

Over the years McGillin’s has welcomed a variety of famous and not-so-famous Irish - from Gerry Adams to Eugene O’Donnell and even Michael Flatley (Irish American, of course). In more recent years, the charming tavern inspired an internationally-shown Modelo commercial about immigration that identified Christopher as a third-generation Irish-American business owner, was the site of the Philadelphia Phillies’ Yule Log and hosted MSN’s Morning Joe for five days and much more.

McGillin’s Olde Ale House offers 30 local craft beers on tap. Every Irish pub needs a good stout and McGillin’s is no exception. You won’t find any Guinness. Instead, the tavern proudly serves O’Hara’s Irish Stout made by two brothers in Carlow County. The tavern is also known for its seasonal cocktails, and although it’s in the heart of one of the U.S.’s biggest cities, small-town prices on its homemade comfort food.

The historic tavern attracts not only young patrons who stay into the wee hours of the morning but their parents, grandparents, and great-grandparents before them who still frequent the bar for lunch or day drinking. The cozy English-looking tavern has a beamed ceiling,  tall windows, dark paneling, and a working fireplace. It’s a story woven into the very fabric of the city.

The original bar sign, a wooden arm holding a bell, hangs above the bar. It’s flanked by almost 160 years worth of liquor licenses (skipping Prohibition) and surrounded by musical instruments, vintage beer cans, varsity banners, caricatures of past regulars, retail memorabilia, aged newspaper clips, old photos and much more. There’s a collection of signs from iconic Philadelphia stores and restaurants that McGillin’s has outlived.

Plus, McGillin’s decorates for every holiday, especially Christmas, when it becomes like a winter wonderland. It takes 15 people 5 hours to hang 3,000 lights, 1,000 feet of garland, 200 ornaments, and 150 red bows. The result is like Christmas on steroids and attracts large crowds, especially families who have made it part of their holiday tradition to stop by before/after holiday shows and shopping.

Stop by and say “Sláinte” to the family that runs McGillin’s Olde Ale House in Philadelphia, one of them is almost always behind the bar.