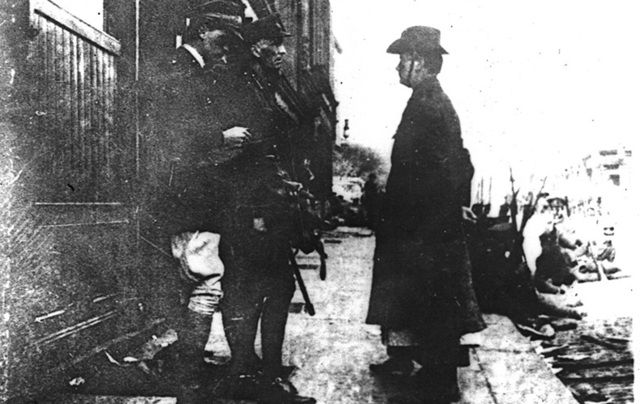 Patrick Pearse surrendering to General at the end of the Easter Rising. NLI

A typed letter signed by Patrick Pearse surrendering to British Forces after the failure of the 1916 Rising has been sold at a London auction for $355,000.

Bidding in London for the item was described as “fierce” and the $355,000 sale price was far in excess of auctioneers’ original estimate of $150,000.

Diarmaid Ferriter, Professor or Modern Irish History at UCD, asked the Times, “How does this end up in private hands for profit? It’s disgusting.

“There is just too much ambiguity about all this. They are not documents that belong in private hands. Patrick Pearse is signing them in his capacity as a member of the provisional government.”

The brief document declares that, “In order to prevent the further slaughter of Dublin citizens, and in the hope of saving the lives of our followers now surrounded and hopelessly outnumbered, the members of the Provisional Government present at Head Quarters have agreed to an unconditional surrender, and the commandants of the various districts of the City and country will order their commands to lay down their arms.”

As commander-in-chief of the rebels and a signatory of the Proclamation it fell to Pearse to surrender. Only when news of Dublin’s surrender reached them did republicans in other parts of Ireland surrender.

Manuscript specialist Kieran O’Boyle said after the sale, “The Order of Surrender is one of the most significant documents in Irish 20th century history, and I am not surprised that it was so keenly sought after, nor that it sold for such an impressive amount.”

No one is sure how many surrender letters were printed, but it not thought to exceed single figures.

Two copies remain in possession of the National Library of Ireland, another – which was signed by James Connolly as well as Pearse – is on display at the Imperial War Museum in London and a further three handwritten are thought to be owned by private individuals.