Which US city held the first St Patrick’s Day parade? Step aside Boston and New York... 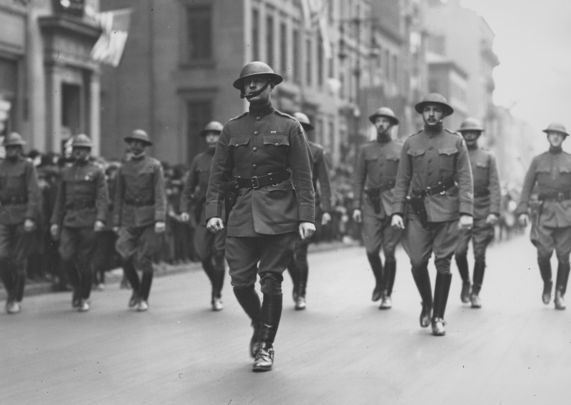 Colonel Bill Donovan marches in the New York St. Patrick's Day Parade, at the head of the 69th Brigade, in 1918. Getty

The world’s oldest St Patrick’s Day festival was in St. Augustine, Florida, some 420 years ago.

Boston and New York have long laid claim to being the centers of Irish immigration that saw the very start of St. Patrick’s Day parades before they had even started in Ireland itself with start-up dates of 1737 and 1762 respectively.

In truth, St Augustine in Florida beats them to the mark and is, in fact, home to the oldest St Patrick’s Day parade in the world. (Waterford in 1903 held the first St.Patrick's Day parade in Ireland.)

According to new research unearthed in Florida, St Augustine may have well over a  hundred years on Boston and New York, holding its first St Patrick’s Day celebration in 1600 and its first parade in 1601.

The sensational information was uncovered in December 2017 by historian Dr. J. Michael Francis in a gunpowder expenditures log in Spain's Archivo General de Indias, or AGI. The documents reveal that spring festivities which included a feast day of San Patricio (St. Patrick) was held in the year 1600 in St. Augustine, Florida.

"While artillery pieces often were fired to help guide ships safely across St. Augustine's protective sandbar, they were also fired during times of public celebrations and religious festivals," Francis wrote in his blog for PBS.

"In March of 1601, St. Augustine's residents gathered together and processed through the city's streets in honor of an Irish saint, who appears to have assumed a privileged place in the Spanish garrison town. Indeed, during these same years, St. Patrick was identified as the official 'protector' of the city's maize fields."

The professor and Chair of the Department of History and Politics at the University of South Florida, St. Petersburg, has studied the records on and off over the past 30 years and he was certainly surprised to discover this information on a St Patrick’s Day celebration written in Spanish in Florida.

"It was certainly a surprise ... it did not register the first time I looked through it. ... It was written in Spanish, and it took a few seconds before it actually hit me that this was a St. Patrick's Day parade/procession," Francis explained to Renee Unsworth from totallystaugustine.com.

"I don't know how much it will change the national perception (of St. Patrick's Day) which has evolved into something so unique. ... It certainly forces people to pause."

"The history of St. Augustine, its diversity, and place in American (U. S.) heritage is often overlooked by people who do not live in Northeast Florida," Halbert said to totallystaugustine.com.

"Yet, it is a city of firsts and oldest in terms of the country's European ancestry. The discovery of this particular cultural tradition only adds to the city's mystic and place. The late historian Luis Arana stated that 'we have only scratched the tip of the iceberg' regarding the historical records (and I might add the city's buried archaeological record). Dr. Michael Francis's discovery of these documents adds to St. Augustine's cultural heritage."

From his research, Francis believes that the St Patrick’s Day parade in St Augustine was influenced by the Irish priest Richard Arthur.

“It is likely that Richard Arthur was responsible for the Irish saint’s short-lived prominence in St. Augustine,” he writes.

“When Arthur disappears from the historical records, so too do the references to the Irish saint, and soon thereafter, the memory of the St. Patrick’s Day celebrations and processions began to fade from public memory.

“Today, St. Patrick’s Day is one of St. Augustine’s most popular celebrations, but its early seventeenth-century origins have long been forgotten.”

While St Augustine could prove to be the oldest St Patrick’s Day parade in the world, as there was no continuation of the parade throughout the past 400 years, Boston and New York could still continue that they are the owners of the oldest continuous parade.

The first parade was held in New York on held on March 15, 1762, in Bowling Green in lower Manhattan. Before this time, St. Patrick’s Day was honored as a Catholic feast day on which a special Mass was attended and nothing more, but in a show of national pride, Irish soldiers within the British Army marched through Bowling Green in honor of their patron saint, with New Yorkers claiming that this would spark a trend that would result in the worldwide festivities we celebrate today.

Boston, on the other hand, could claim the first celebration but not first St. Patrick’s Day parade. On March 17, 1737, as a gesture of solidarity among the city’s new Irish immigrants, Boston’s Irish community joined together in festivities of their homeland.

Either way, all three locations in the US were hundreds of years before the first St Patrick’s Day parade in Ireland which was held in Waterford in 1903.

What do you reckon? Is it likely that the first St Patrick’s Day parade in the world took place in Florida? Let us know what you think in the comments section, below.

This story was written in collaboration with Renee Unsworth, founder of totallystaugustine.com.