The president talks about the influences of his Ulster ancestors. 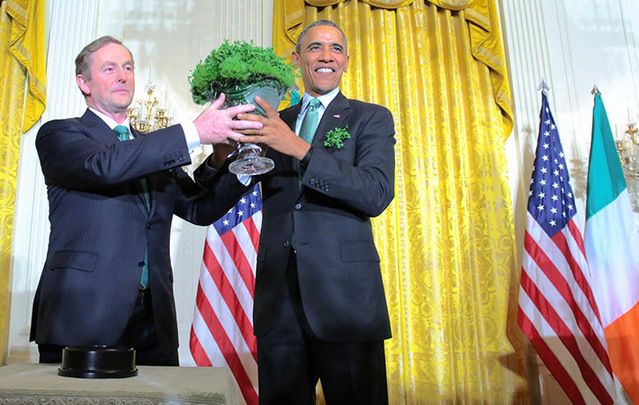 President Obama in his speech at the DNC on Wednesday night caught a lot of people by surprise by talking about his mother’s side of his family—and their Scots-Irish influences:

“See, my grandparents—they came from the heartland. Their ancestors began settling there about 200 years ago. I don't know if they had their birth certificates, but they were there.

They were Scotch-Irish mostly—farmers, teachers, ranch hands, pharmacists, oil rig workers. Hearty, small-town folks. Some were Democrats, but a lot of them, maybe even most of them, were Republicans—the party of Lincoln. And my grandparents explained that folks in these parts, they didn't like showoffs, they didn't admire braggarts or bullies.”

The Washington Post did an interesting dissection of this large, but mostly forgotten group of Americans who were critical in settling America and who, according to the Post, are a “reemerging cultural identity.”

Who, exactly, are the Scotch-Irish? They are largely Protestants from Ulster who, as the President said, immigrated to America—then part of England—in the 18th century. They came 200,000 strong and settled in what is now Pennsylvania, branching out to other parts of Appalachia and the west. Unlike the flood of Irish that would transform America after the Great Famine of the 1840s, these Scotch-Irish Protestant were strongly anti-Papal and strong supporters of King William of Orange—King Billy in the vernacular—the big winner at the Battle of the Boyne in 1690. As they spread across America they were called other names too—like hillbillies—because of their religious and political influences. The U.S. Census puts them today at about 2 percent of the population.

The President may have been trying to entice them back into the Democratic fold because today they are strongly Republican and staunch supporters of Donald J. Trump. According to former Virginia senator Jim Webb, “Few key Democrats seem even to know that the Scots-Irish exist, as this culture is so adamantly individualistic that it will never overtly form into one of the many interest groups that dominate Democratic Party politics.” In his book Born Fighting: How the Scots-Irish Shaped America, Webb wrote that they “don’t go for group-identity politics any more than they like to join a union.”

They are a substantial voting block ranging from Pennsylvania all the way to New Mexico—Red State America—according to author Colin Woodard. He puts their number at 56-million. “The region that they left the dominant cultural footprint on,” he says, “is the largest of the regional cultures.”

Perhaps the President bought up his ancestry because he was trying to help Secretary Clinton in this area, although history shows, despite winning two national elections, Obama was not a winner with the Scots-Irish of America. Woodard points out that “This was Obama’s worst region by far.”