A cop and a criminal, his life story is truly extraordinary 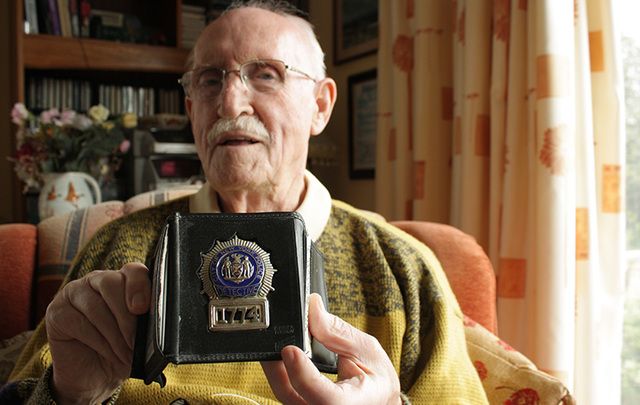 Falls from grace are rarely more spectacular than the one suffered by Peter Daly, who died earlier this year. The Donegal native was in his 80s and was once a respected veteran of the Korean War and a police officer in New York, but that all changed after he was received a ten year jail sentence for selling the very drugs he confiscated from criminals.

Born into a middle-class family in Ballyshannon, Co Donegal, Daly had options like few of his peers in the impoverished town during the 1950s. His father was a doctor and, although he could have paid for him to attend college, young Peter yearned to go to America. Aged 18 he shipped off for New York City where “Lights all over the place,” was his initial verdict.

He enlisted in the US military during the Korean War and in 1961 joined the New York Police Department. His superiors placed him with the Special Investigations Unit whose job was to crack down on drug-dealing as recreational use of banned substances flourished.

I'll be on the Mark Patterson Show on BBC Radio Foyle at 2.40 today discussing Peter Daly who died this week.https://t.co/oMwPdLAgtW pic.twitter.com/m9lSbqVnlD

The work was considered more glamorous, and at times was more lucrative, than patrolling the streets. In an era when police wages were being cut many cops saw it as simply a perk of the job that they could split any cash found in a raid between the men on duty. Such corruption was barely the tip of the iceberg.

One day in April 1970 Daly and some colleagues captured what was then the largest haul of illegal drugs they’d ever found. “It wasn’t 100kg . . . it was a 105kg minimum,” prosecutor Joseph Jaffe told an RTÉ documentary about the case years later.

At that time the NYPD was rife with corruption and Daly and a number of others sold on the drugs thinking their status as policemen would help them evade justice.

“And those 5kgs, they sold them,” Jaffe continued. “And they divided them. They sold them. And they divided the money. And that makes them the same as any other Class A felon. It makes you an absolute drug dealer. Some of the people involved – not particularly Mr Daly – had no compunction about stealing whatever they could get their hands on. And that was as an organized group.”

Aware that a warrant had been issued for his arrest, Daly fled home to Donegal, where he hoped to escape justice. It was only because he was randomly stopped by police on a Christmas visit to Liverpool, England in 1974 that he ever faced justice; his visit came after the infamous Birmingham pub bombings – the deadliest of the IRA’s attacks in Britain – and Irishmen were regularly being stopped at random for no reason other than their accent. So imagine the British authorities' surprise when they realized the man they had just arrested was not a terrorist but a drug dealer with an international warrant in his name signed by none other than Henry Kissinger.

Daly was swiftly hauled before a grand jury in New York on Class A Felony charges but rebuffed prosecutors’ attempts to agree a plea bargain and told them nothing.

“They assumed I was guilty and that was it,” he told RTÉ in 2013. “I don’t know what information I had . . . people still say to me that I must have had some knowledge. And I didn’t, but I wasn’t going to share it with them anyway.”

The police even told him he could return to Ireland to visit his dying father if he would confirm to them details about how his colleagues had sold confiscated drugs on the side for huge profits. Daly refused.

The extent of his involvement is still contested – he was only convicted on eight of the 12 original charges – but what is not disputed is that he had $150,000 in his bank account at the time, a sum 30 times the average salary of an ordinary NYPD policeman. He was sentenced to ten years for his crimes – other policemen cooperated and were spared jail – but he only served half that time.

Upon release in 1980 he quickly returned to his native Ballyshannon and mostly people didn’t ask him about his spell in prison. He made the occasional trip back to New York to visit his old stomping grounds and meet up with ex-workmates, some of whom admire his refusal to rat out their corrupt colleagues.

“Peter’s story is amazing for what it is,” said Bob Leuci, who did cooperate and was spared jail. “You have heads of Mafia families who testify and co-operate. They couldn’t get Peter to talk. So it is impressive. You Irish guys are stand-up guys. Italians are rats all over the place. But these Irish guys keep their mouths shut.”

It wasn’t until he was approached by an RTÉ journalist and Ballyshannon local in 2013 that Daly spoke freely about his time in New York, although even then he remained a little cagey about his role.

“I can’t say that anybody took anything because I don’t know,” he admitted to RTÉ. “Of course I was dishonest! I am dishonest now. We are all dishonest. You have to make your own judgments. I can honestly say that there must be thousand regrets. I was brought up to know right from wrong. My regrets are innumerable. Whether it was Ballyshannon or New York, it was all part of life and please God we will pass away quietly into the night at the end of it.”

Peter Daly passed away peacefully on January 30 in St John’s Hospital, Sligo. He is survived by his daughter Finola and sons Shane and Evan. Ar dheis Dé go raibh a anam dílis.