Documenting the sad, discriminatory history of "No Irish Need Apply" signs in Boston - today home to a large, proud and successful Irish community. 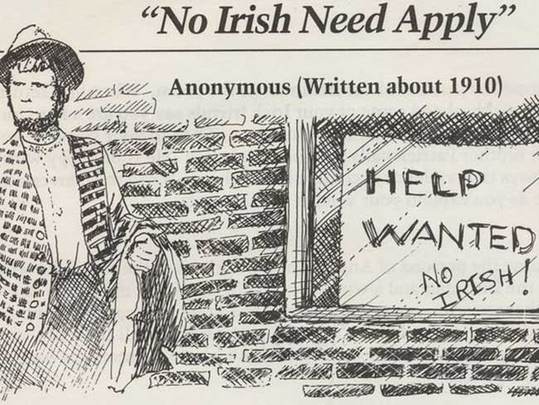 How an eight-grader dove deep and found vast evidence of the "No Irish Need Apply" being real and very prevalent.

In a July 2015 piece for the Oxford Journal of Social History – the same journal where Jensen once published his theories – Rebecca A. Fried, then an eighth-grader at the Sidwell Friends school in Washington, DC, found overwhelming evidence that the NINA signs were very real and very prevalent.

Inspired by her achievement, Bill Fitzpatrick, an IrishCentral reader from Boston, decided to take a deep dive into the history of NINA in Boston. The examples of ads he found, collected in the following video, paint a vivid picture of the discrimination faced by our Irish ancestors just a little over 100 years ago. In some of the advertisements "colored" employees were fine. In other ads, it was "No Irish or drunks." In many, it was only Protestants who could apply.

Fitzpatrick has proven conclusively the signs existed and has added significantly to Fried's great work.

Instead, she wrote, “the documentary record better supports the earlier view that Irish-Americans have a communal recollection of NINA advertising because NINA advertising did, in fact, exist over a substantial period of United States history, sometimes on a fairly widespread basis.” Using her digital savvy, Fried searched online newspaper archives and databases to find decades worth of No Irish Need Apply ads from across the US, definitively setting the record straight.

Now Fitzpatrick, focusing solely on Boston, has shown how widespread they were there.

"Growing up in Boston I heard about the signs and knew the history of anti-Irish sentiment from my grandparents and other Irish who settled in Boston," he told IrishCentral, "so I thought I would try to find some examples. I signed up for a newspaper archives subscription and started researching.

However, he quickly realized that "The NINA signs you see today are obvious reproductions. Twelve bucks on eBbay complete with water stains and thumbtack holes. However, the fine print says 'Boston Printing Co 1915.' By 1915 the Irish were running Boston and I doubt Mayor Curley would tolerate such bigotry."

Instead, to find real-life examples, he had to "go back to the 1880s and 90s [editions of] The Boston Evening Globe and the Boston Post for the classifieds. There were four addresses from my old neighborhood alone. Mostly Irish women were on the receiving end of these ads – servant, waitress, etc. My grandmother, Nellie Hurley, was one of them."

The video includes the announcement of her marriage to Fitzpatrick's grandfather, Michael Connolly, in addition to a photo of the Gaelic football Team Erin's Hopes, where Pa Connolly is at the top right. "They and my paternal grandparents and thousands of Irish faced this harsh reality in the daily papers as well as in the windows of factories, warehouses, etc," Fitzpatrick said.