Three ancient stories relating to Newgrange and the great monuments of Brú na Bóinne that refer to inbreeding. 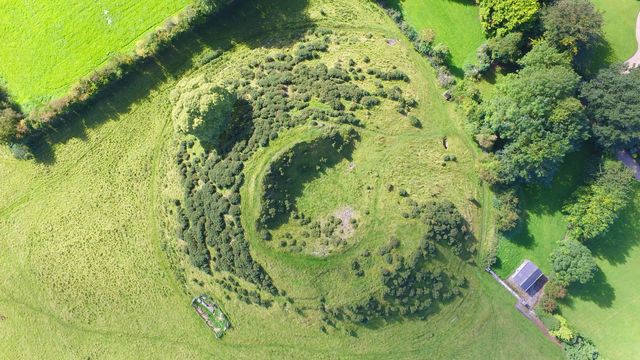 The disparate myths surrounding Newgrange, or, in the case of one, Dowth a sister site in the Boyne Valley, County Meath.

A recent widely-reported DNA study in 2020 shed new light on the people who were buried in the Neolithic passage tombs of Brú na Bóinne and elsewhere in Ireland. Among its findings was the fascinating revelation that an adult male interred in the chamber of Newgrange around 5,200 years ago was the son of an incestuous union. His parents were first-degree relatives – i.e. they were either brother and sister, or father and daughter or mother and son.

The authors of the study, which was published in the journal Nature in June 2020, discussed a myth about Dowth that mentions incest. But there are at least three ancient stories relating to Newgrange and the great monuments of Brú na Bóinne that refer to inbreeding.

The purpose of this article is to identify these disparate myths and discuss their association with Newgrange, or, in the case of one, Dowth a sister site of Newgrange. 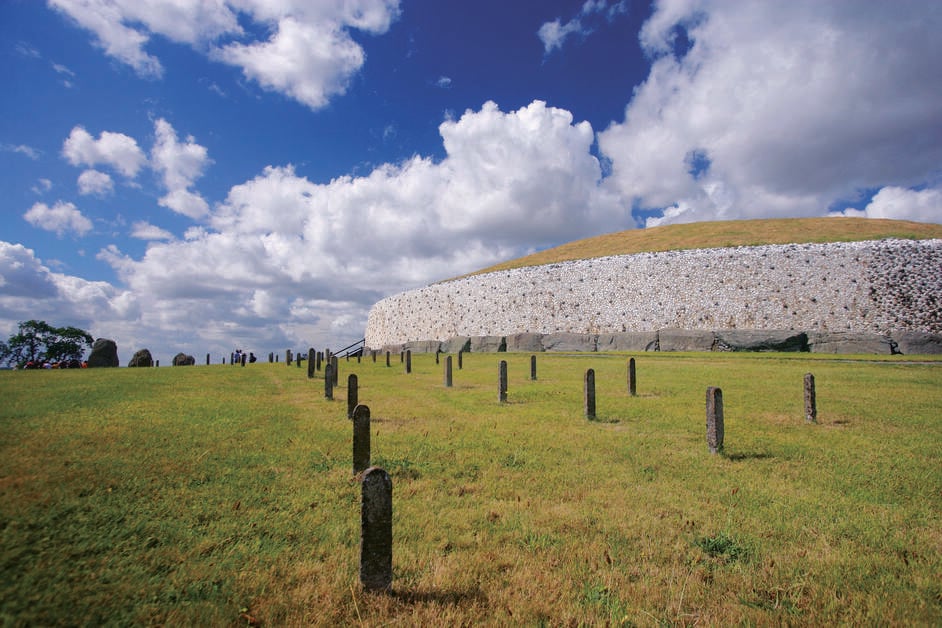 How Dowth got its name

The first is the one mentioned in the Nature article. It is the myth about how and why Dowth was constructed, according to the Dindshenchas, a collection of metrical and prose toponymic material written down in the Middle Ages which seeks to explain how eminent places of Ireland got their names.

Dowth is a sister site of Newgrange, one of three giant passage-mounds in the Bend of the Boyne or Brú na Bóinne complex in County Meath, Ireland, along with Knowth.

The Dindshenchas story of Dowth features a king who wants all the men of Ireland to build him a great monument through which he can access heaven. His sister casts a spell on the sun to stop it from moving in the sky in order that the builders should have endless daylight in which to complete their task. However, the king and his sister have sex, causing the spell to be undone, and darkness comes, so the builders abandon their task.

The authors of the new paper, titled A dynastic elite in monumental Neolithic society, led by Dr. Lara Cassidy of Trinity College Dublin, refer to the Dindshenchas tale of Dowth’s alleged origins:

The Brú na Bóinne passage tombs appear in Medieval mythology that relates their construction to magical manipulations of the solar cycle by a tribe of gods, which has led to unresolved speculation about the durability of oral traditions across millennia. Although such longevity seems unlikely, our results strongly resonate with the mythology that was first recorded in the eleventh century AD, in which a builder-king restarts the daily solar cycle by copulating with his sister.

The birth of Cúchulainn

Another myth about Newgrange which features a reference or allusion to incest is found in the Ulster Cycle of tales and relates to the birth of Cúchulainn, the great warrior of the saga Táin Bó Cúailnge, ‘The Cattle Raid of Cooley’.

The most familiar version of the story features the Tuatha Dé Danann deity Lugh as the supernatural father of the boy Sétanta (the name by which Cúchulainn was known in his youth). These stories place the conception of the wonder-boy at Bruig na Bóinde (Newgrange), the palace or otherworld mansion of the gods.

The Ulster king Conchobar and his daughter, Deichtine, chase swans away from Emain Macha, the ceremonial stronghold or capital of the province, as far as Newgrange.

There follows an episode that falls into the category of ‘miraculous births’, or ‘virgin births’, found in many mythologies around the world. That night, she dreamed that a man came to her and told her that he had brought her to Brug na Bóinne (Newgrange) to sleep with her there and that it was in fact his house that she had entered. He said that “the boy she had reared was his, that he … was to be called Sétanta, that he himself was Lug mac Ethnenn.”

Thereafter, Deichtine indeed became pregnant. The Ulaid (Ulstermen) were troubled since they did not know the father, and they surmised that Conchubur had fathered the child while drunk, for Deichtine used to sleep next to him. Conchubur then betrothed his daughter to Súaltaim son of Roech. Deichtine was greatly embarrassed at having to go to Súaltaim’s bed while being pregnant, so, when the time came, she lay down in the bed and crushed the child within her. Then she went to Súaltaim, and at once she became pregnant by him and bore him a son.

Celtic myth scholar James MacKillop says that in the third (and perhaps least familiar) version of the story of the birth of Cúchulainn, “Conchobar, as either Deichtine’s father or brother, commits incest with her to father Cúchulainn”.

The king sleeps with his daughter

The third story that connects Newgrange and incest is one of the best-known myths concerning the great monument of Bruig na Bóinde (Newgrange), Tochmarc Étaíne, The Wooing or Courting of Étaín. The tale is from the 12th-century Lebor na hUidre (The Book of the Dun Cow) and the 14th century Yellow Book of Lecan.

The central figure is Étaín, the most beautiful woman in Ireland. There are three parts to the story, each one recounting a different lifetime or iteration of Étaín. In her first life, she is won by Midir, who sleeps with her at Newgrange. In her third iteration, she is married to the High King of Tara, Eochaid Airem. Midir comes to Tara and magically takes Étaín away, but the king wins her back – or at least he thinks it is her – but, through trickery, he is deceived, and later finds out that the woman who he had resumed married life with was, in fact, his own daughter.

Eochaid is understandably distressed that his wife is gone and that he had slept with his own daughter. Furthermore, his daughter becomes pregnant and bears a daughter. “O gods,” he said, “never will I look upon the daughter of my daughter.”

The child of the king’s incestuous union is put out to die, but she is found by Findlám, a herdsman, and his wife, who raise her.

NG10 and a ‘dynasic elite’ of Newgrange

The authors of the Nature paper sampled 44 genomes, 42 of them from Neolithic sites in Ireland (including the sample ‘NG10’, a portion of the skull of an adult male retrieved from the chamber of Newgrange during the excavation of the monument in the 1960s by Prof. Michael J. O’Kelly) and two from the earlier Mesolithic period. The Newgrange male was labeled ‘NG10’ in the study.

Co-operative ideology is often proposed as a motivating factor in the construction of megalithic monuments, but the magnitude of human labor needed to erect giant structures such as Newgrange has led some scholars to assert that a hierarchy was required.

The most extreme case of this, according to the paper’s authors, “is a small elite marshaling the labor of the masses.” They continue:

Here we present evidence that a social stratum of this type was established during the Neolithic period in Ireland. We sampled 44 whole genomes, among which we identify the adult son of a first-degree incestuous union from remains that were discovered within the most elaborate recess of the Newgrange passage tomb.

Socially endorsed inbreeding of this nature is very rare, they say, and occur “almost exclusively among politico-religious elites – specifically within polygynous and patrilineal royal families that are headed by god-kings”.

I have identified four stories from Irish mythology written down in medieval times relating to incest or inbreeding. The supposed longevity of these tales is hotly contested by modern scholars, and yet aspects of some of the ancient tales have been confirmed by modern archaeology and genetic studies. Three of the four myths discussed have their setting, at least in part, at the great monuments of Brú na Bóinne. And those three all describe incidents of incest involving a king.

* Anthony Murphy is a journalist, photographer, author, and astronomer who lives in Drogheda, at the gateway to Ireland’s historic Boyne Valley. He has spent more than 20 years researching, photographing, and writing about the ancient megalithic monuments of the Boyne Valley and their associated mythology, cosmology, and alignments. For more visit www.mythicalireland.com.