"Iron Women: The Ladies Who Helped Build The Railroad" by Chris Enss celebrates the women who influenced the first transcontinental railroad in the 1860s. 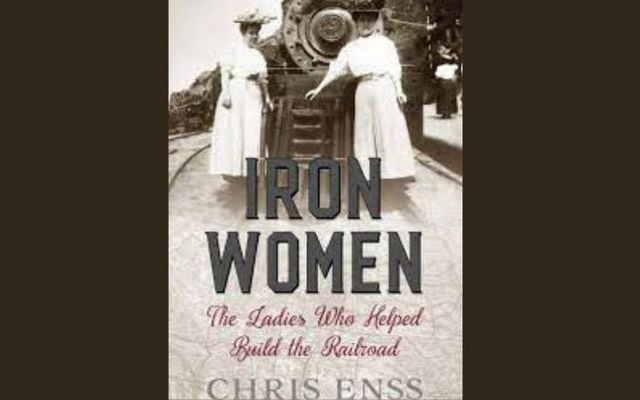 A new book telling the stories of the women who helped build the first transcontinental railroad is a fascinating insight into the lives of 19th-century American women.

"Iron Women: The Ladies Who Helped Build The Railroad" by Chris Enss celebrates the women who served as telegraph operators, mechanics, or as registered nurses and stewardesses in passenger cars in the early days of the US railroad.

Enss is a New York Times best-selling author who has written more than 40 books about women in the Old West in just over 20 years.

In her latest release, she seeks to look beyond the 4,000 men who built the first transcontinental railroad between New York and San Francisco over a five-year period in the 1860s and celebrate the often-overlooked role that women played in the creation of rail lines.

Enss, who has roots in County Cork through her great-grandfather Joseph Hamilton, said that many of the 4,000 men who built the railroad were Irish immigrants working west from Omaha.

However, this is a tale of the women who influenced the American railroad industry, celebrating the storied lives of women who played a part in creating an ambitious project stretching from east to west coast.

Enss notes that the physical task of building the 3,000-mile railroad had been achieved by men but says that women "made significant and lasting contributions to the operation".

Below is an excerpt from the introduction to Enss's new book.

When the last spike was hammered into the steel track of the Transcontinental Railroad on May 10, 1869, at Promontory Summit, Utah, Western Union lines sounded the glorious news of the railroad’s completion.  At 2:45 P.M., on that day, the following dispatch was received at New York.

“Promontory Summit, Utah, May 10 – The last rail is laid!  The last spike is driven!  The Pacific Railroad is complete!  The point of junction is 1086 miles west of the Missouri River, and 690 miles east of Sacramento City.”

For more than five years, an estimated four thousand men, mostly Irish working west from Omaha and Chinese working east from Sacramento, moved like a vast assembly line toward the end of the track.

Editorials in newspapers and magazines from coast to coast praised the accomplishment, and some boasted that the work “was begun, carried on, and completed solely by men.”  The August 1869 edition of Godey’s Lady’s Book and Magazine reported, “No woman has laid a rail; no woman has made a survey.”  The article added that “the muscular force and the intellectual guidance have come alike from men.  It is worthwhile for the women who are clamoring for the suffrage to reflect whether the right to vote does not imply a capacity for the hard work of subduing the world, mental and physical, to which so far only men have been found competent.

“We have indicated again and again in this publication what we believe to be the true sphere of woman: in the home, in society, among the poor; refining and ennobling social intercourse; alleviating the misery of the world.  She can do these things now; if she contests man’s work with him, she can do them no longer.  Not by her hand can build the city…or the railroad.”

Although the physical task of building the railroad had been achieved by men, women made significant and lasting contributions to the historic operation.  The female connection with railroading dates as far back as 1838 when women were hired as registered nurses/stewardesses in passenger cars.  Those ladies attended to the medical needs of travelers and also acted as hostesses of sorts, helping passengers have a comfortable journey.

Susan Morningstar was one of the first women on record employed by a railroad.  She and her sister, Catherine Shirley, were hired by the Baltimore and Ohio Railroad in 1855 to keep the interior of the cars clean and orderly.  The feminine, homey touches they added to the railroad car’s décor attracted female travelers and transformed the stark, cold interior into a more welcoming setting.

Miss E. F. Sawyer became the first female telegraph operator when she was hired by the Burlington Railroad in Montgomery, Illinois, in 1872.  The following year, Union Pacific Railroad executives followed suit by hiring two women to be telegraph operators in Kansas City, Missouri.

Inventress Eliza Murfey focused on the mechanics of the railroad, creating devices for improving the way bearings on the rail wheel attached to train cars responded to the axles.  The device, or packing as it was referred to, was used to lubricate the axles and bearings.  Murfey held sixteen patents for her 1870 invention. 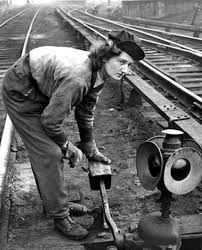 A woman works on the railroad. Chris Enss

In 1879, another woman inventor named Mary Elizabeth Walton developed a system that deflected emissions from the smokestacks on railroad locomotives.  She was awarded two patents for her pollution-reducing device.

A cattle rancher’s daughter, Nancy P. Wilkerson, from Terre Haute, Indiana, created the cattle car in 1881.  Using a rack and pinion mechanism, she devised sliding partisans that separated the livestock from the food compartments and water troughs.

From the mechanical to the ornamental and a combination of both, women like civil engineer Olive Dennis and architect Mary Colter made their marks on the railroad in the late 1890s.  While employed with the Baltimore and Ohio, Olive introduced reclining passenger seats and individual window vents that not only allowed fresh air into the car but also trapped dust.  The refinements were quickly adopted by railroad lines across the country.

Mary Colter was the chief architect and decorator for the Fred Harvey Company.  Harvey developed the Harvey House restaurants and hotels that served rail passengers on the Atchison, Topeka, and Santa Fe Railway.  Mary designed and decorated Harvey’s eateries and inns.  She considered the La Posada Hotel in Winslow, Arizona, to be her finest work.

In addition to Mary Colter’s architecture and decorating style, Fred Harvey’s establishments were further enhanced by the “attractive and intelligent young women of good character” who worked at his eating houses throughout the West.  Dressed in their starched, black and white shirts, bibs, and aprons, the always-beautiful Harvey Girls served cowhands, trainmen, and travelers from Dodge City, Kansas, to Santa Fe, New Mexico.

“The girls at a Fred Harvey place never look dowdy, frowsy, tired, slip-shot or overworked,” an article in the June 22, 1905, edition of the Leavenworth Times noted.  “They are expecting you – clean collars, clean aprons, hands and faces washed, nails manicured – there they are bright, fresh, healthy, and expectant.” 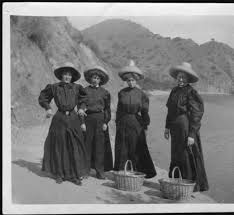 Two of the most desirous locations Harvey Girls sought to work were the Cardenas Hotel in Trinidad, Colorado, and the El Garces in Needles, California.  Both were beautifully situated and uniquely designed.  The El Garces was referred to as the “Crown Jewel” of the entire Fred Harvey chain.

Soiled doves capitalized on the business opportunities the completed railroad line introduced.  Ambitious madams acquired their own cars and transformed the interior into parlor houses.  Independently contracted locomotives would transport the rolling houses of ill repute and the wicked women aboard to various cowtowns along the Southern Pacific Railroad.

Highly principled ladies were able to make just as much of a fortune from the railways as disreputable women.  Sarah Clarke Kidder, the first female railroad president, proved women were just as capable of running a rail line as men.  In 1901, Sarah took over as head of California’s Nevada County Narrow Gauge Railroad.  The rail line, which hauled lumber, farm produce, and gold destined for the United States mint in San Francisco, flourished during her twelve-year rule.

Cora Mears Pitcher took over as president of the short line the Silverton Northern Railroad in southwest Colorado in 1931.  Her father, Otto Mears, built the railway in 1885 to support the lucrative mining business in the area.  The Silverton Northern Railroad ran from Silverton up the Animas River to Eureka.  Cora took great pride in assuming responsibility for the line and in preserving the memory of her father who operated a successful copper mine in the region.

Stage actress Lillie Langtry, one of the most famous actresses of the time, made traveling by rail a glamorous experience.  The interior of her private car, called the LaLee, featured upholstered seats, admirably carved woodwork inlaid with silver bands, plush carpeting, and a ceiling of diamond-shaped form on a lightly tinted lavender background.  In 1904, Lillie and LaLee traveled to Val Verde County, Texas, to meet the well-known justice of the peace Judge Roy Bean.  The judge was a great admirer of Lillie’s and had written her several times expressing his devotion.  Sadly, the judge had passed away before the actress’s visit.

Publisher and author Miriam Leslie might have done more to promote traveling by rail than any other woman in the 19th century.  In 1877, she embarked on an extravagant five-month train trip from New York to San Francisco.  Onboard the Union Pacific she visited such popular western locations as Salt Lake City, Utah; Cheyenne, Wyoming; and Denver, Colorado.  Miriam referred to the ride across the frontier as “exhilarating” and looked forward to seeing every square mile of the popular towns and cities on the itinerary.

"Iron Women: The Ladies Who Helped Build The Railroad" is available to purchase in all good bookstores. Click here to learn more about Chris Enss.