"Starvation was pushing people into actions they previously would have considered unimaginable." 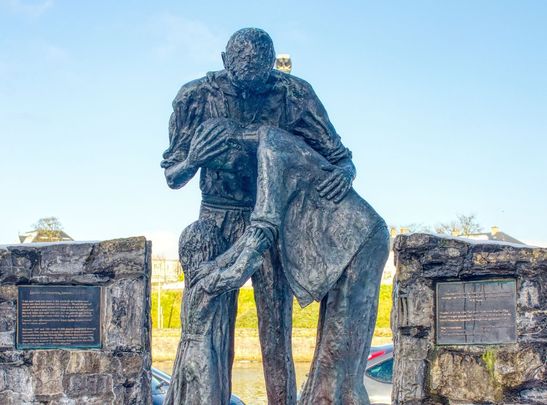 Two brutal killings on December 8, 1846 indicated just how deadly day-to-day life in Ireland was during the Great Hunger.

By December 1846, the situation in Ireland was deteriorating fast. The potato crop had failed again that year, while the famine relief measures of the British government had proved completely inadequate. Meanwhile, large quantities of food continued to be shipped out of Irish ports making the entire situation worse.

As increasing numbers faced starvation, it was inevitable that desperate people resorted to desperate measures. In early December 1846 County Offaly (then known as King’s County) was rocked by two brutal killings that indicated just how deadly day-to-day life in Ireland was becoming.

The first of these was the murder of William Renehan who died in the early hours of December 8, 1846, after a brutal attack. The elderly man lived with his son Thomas and the previous evening four men had arrived at their house demanding money. While his son, Thomas, had tried to fight back the attackers, he was eventually overpowered. The four assailants proceeded to beat and torture William, burning him with coals from the fire. He died a few hours later from shock.

Shocking as this was County Offaly was rocked by another murder a few hours later. At 6.30 pm on December 8, William Lloyd was approached by a man as he stood at his front door in the town of Birr. The man drew a gun and shot Llyod, fatally injuring him. He scarcely had time to utter the words "murder, murder" before he perished. His death evoked widespread condemnation and outcry as he had six young children.

While the motive for Renehan’s murder had been theft, Lloyd’s murder was slightly different. It was widely believed he had been killed due to a dispute with his tenants. He was trying to force them to pay overdue rents which they could no longer afford.

While ostensibly the two murders were unrelated, there was little doubt the volatility the famine unleashed on society was the root cause. Starvation was pushing people into actions they previously would have considered unimaginable. While Renehan and Lloyd were among the earliest of such famine murders, they were only the beginning. In the following months crimes of all sorts rose dramatically as the starving poor were increasingly willing to survive by any means necessary.

* Fin Dwyer Is a historian, author, and creator of the Irish history podcast. Over the last seven years, he has been creating free podcasts which makes Irish history accessible to new audiences. He has covered diverse topics from the Middle Ages to modern history. He is currently focusing on the story of the Great Hunger. With over three million individual downloads, the show is one of Ireland's most popular podcasts. You can find his podcast on iTunes.