You might think you know what the song, made famous by Ronnie Drew and The Dubliners, "Monto" is all about but you're probably wrong! 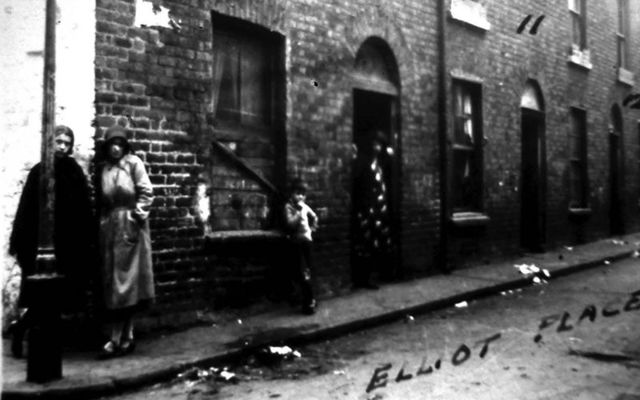 Women standing on the street corner of Elliot Place, in Monto, Dublin. NLI

The satirical and historical stories behind the bawdy Dublin song "Take me up to Monto".

Many think the popular Dublin ballad Monto comes from the 19th century due to the historical references sprinkled in the song but, it is only 60-years-old, and its author would have turned 100 years old this year!

George Desmond Hodnett was born in Dublin, on 25 February 1918, and penned the famous Monto ballad in 1958.

Hodnett, who was known to friends as Hoddy, was the son of a Swiss lady and a Free State army colonel. Hodnett entered Trinity College to study law, his father’s people were a well-established legal family from Cork and it was presumed that this was a natural progression for the young Hoddy but, his love of music trumped his law studies and he would go on to become a familiar fixture in the Dublin music scene.

Hodnett became a music reviewer for the Irish Times and took on the role of resident pianist in theaters across Dublin, including the Pike Theatre where he composed many satirical songs. Hodnett fell in with the bohemian scene which flourished in the Dublin of the 1940s and it was a social scene that included the likes of Brendan Behan, Paddy Kavanagh and JP Donleavy.

The area around Montgomery Street (now called Foley St.) was once one of Europe's most infamous red-light districts. Because it was located near the docks and in a garrison city it meant that those in British uniform kept business flowing in the Monto. Ironically, the Monto was also a haven of IRA safe houses during the War of Independence, one of those was Phil Shanahan’s pub which hosted the likes of Dan Breen and Michael Collins.

In the 1920s when the British soldiers and sailors left Dublin, Frank Duffy and the Legion of Mary went in to the Monto and cleaned it up, thus ending its bad reputation.

Hodnett's ballad about the Monto gained widespread popularity in 1966 when Ronnie Drew first sang it on the stage in the Gate Theatre and from then on The Dubliners included the bawdy ballad in every live performance.

The Furry Glen is an area in Phoenix Park where courting couples used to frequent while Buckshot Forster who lost his mot (girlfriend) there, was a much-despised British politician called William Edward Forster and when he whistled for a growler it was a horse-drawn carriage he was whistling for.

The verse which tells us how the Tsar of Russia and the King of Prussia landed in Phoenix Park in a hot air balloon refers to an event that did not happen! The last verse refers to the (true) visit of Queen Victoria to Dublin in 1900 in a crudely comical manner and her (false) visit to the Monto in the company of the Lord Mayor!

George Desmond Hodnett died in 1990 but his bawdy ballad about the Monto keeps alive the memory of a forgotten part of Dublin's social history. Langeroo, to you!