Made famous by Bing Crosby and “The Quiet Man”, the life of the Galway Bay composer is the strange story of a quiet doctor buried in an unmarked grave. 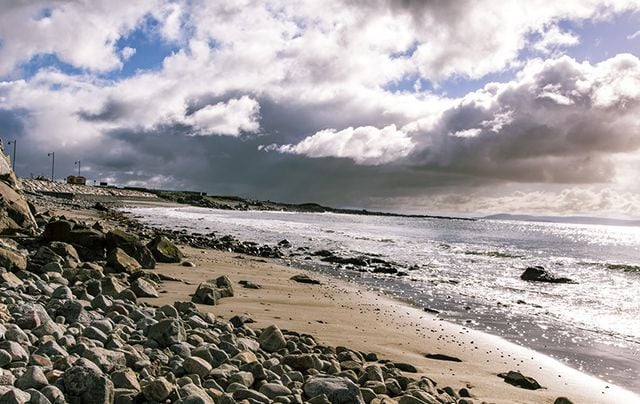 The beautiful Galway Bay in the west of Ireland. iStock

Galway Bay, one of the most famous Irish emigrant songs, was written in 1947 and made famous by Bing Crosby and by its use in The Quiet Man. The story of who wrote Galway Bay is just as moving as the song itself.

It was once the third bestselling song in the world, according to the Billboard chart. It became one of the great Irish tunes of all time.

The creator of "Galway Bay" was a quiet doctor who was born in Ireland, who died in England and was buried in an unmarked grave back in his beloved Irish homeland. Doctor Arthur Colahan never lived to see the massive worldwide success of his song.

He was born in Enniskillen, County Fermanagh, the eldest child of Professor Nicholas Whistler Colahan (1853-1930) and Elisabeth Quinn of Limerick (b.c.1866). His family moved to Galway, and he grew up there.

After completing his secondary education at St Joseph's College, Galway (The 'Bish'), he enrolled at University College Dublin in 1900, did an Arts degree and then studied medicine. He transferred to University College Galway and graduated in 1913. He was a member of the college Literary and Debating Society and participated in drama.

He began his medical career in the County Infirmary in Galway and then moved to Holles Street. He joined the Royal Army Medical Corps and was badly affected by mustard gas in India. After the war, he settled in Leicester, where he spent the rest of his career as a neurological specialist.

Theories abound as to where the song was written or where it was first heard. Some say it was in the home of Dr. Morris at 1 Montpelier Terrace, while others believe it was in The Vicars Croft on Taylor's Hill, from where one could see Galway Bay.

Other songs written by Colahan included Maccushla Mine, Asthoreen Bawn, Until God's Day, The Kylemore Pass and The Claddagh Ring.

The opening lines: “If you ever go across the sea to Ireland… and maybe at the closing of the day” has brought many a tear to emigrant's eyes.

The “Light a Penny Candle" lyric from the song became the title of a Maeve Binchy book that proved very popular.

In more recent times the Pogues revived its memory by including it in their incredible Christmas tune “Fairytale of New York.”

The lyric from 'Fairytale' is: “The Boys of the NYPD choir were singing 'Galway Bay..'” In fact, during the filming of the video, the NYPD band did not know the lyrics and chanted the Mickey Mouse Disney song instead.

The Colahan family grave in Galway cemetery makes no mention of Dr. Arthur's burial and few of his family attended his funeral. The song was used in the 1952 movie "The Quiet Man," starring John Wayne and Maureen O’Hara, but Arthur Colahan's name does not appear in the credits. It seems this songwriter was forgotten by almost everyone.

The Irish Graves Association discovered that Colahan, who composed the song was buried in a multiple grave in Bohermore, the Galway city center cemetery. They approached Mayor O Brolcháin about marking the gravesite with his name in 2007.

The man, who wrote the biggest selling song in 1956, has "no recognition at all", according to the Mayor. "He should have his name on the grave. I thought it was a reasonable request. Though we have Colohan Road in the city, he's obviously someone that a lot of people haven't heard of."

Ironically the city of Leicester in England has a plaque marking the house where he lived in.

By the way, Galway Bay is a real place, a large bay between Galway and Clare, 30 miles long and 15 miles wide dotted by beautiful islands and spectacular scenery.

If you ever go across the sea to Ireland

Then maybe at the closing of your day

You can sit and watch the moon rise over Claddagh

And see the sun go down on Galway Bay

Just to hear again the ripple of the trout stream

The women in the meadow making hay

Just to sit beside the turf fire in a cabin

And watch the barefoot gossoons as they play

For the breezes blowing o'er the seas from Ireland

Are perfumed by the heather as they blow

And the women in the uplands diggin praties

Speak a language that the strangers do not know

Yet the strangers came and tried to teach us their ways

And they scorned us just for being what we are

But they might as well go chasin after moonbeams

Or light a penny candle from a star

And if there's gonna be a life hereafter

And faith somehow, I'm sure there's gonna be

I will ask my God to let me make my Heaven

In that dear land across the Irish sea.